Much of the research in new anode materials has focused on alloys, usually of Si due to its ability to alloy with large amounts of Li.  However, problems persist that keep alloy anodes from widespread use in commercial cells.  The biggest issue for the implementation of alloy anodes is their huge volume expansion during lithiation that can lead to particle fracture, pulverization and electrical isolation of portions of the anode, disruption of the SEI and ultimately capacity loss and cell failure [1].

It has been shown that using amorphous or nanostructured alloys can alleviate the pulverization experienced by crystalline materials that suffer from inhomogeneous expansion during phase changes [2].  Also, the inclusion of inactive phases in alloys can help to lessen the expansion of alloy anodes during lithiation, thus easing the stress on the electrode and reducing capacity fade [3].

Mechanical milling has long been used to both reduce grain size and create metal alloys.  Ferguson et al. [4,5] used mechanical attrition to make nanostructured Sn-Co-C alloys.  These alloys had improved electrochemical performance versus crystalline counterparts of similar composition.  However, the process of mechanical attrition can be very time consuming, with some experiments taking days or weeks to produce the desired structure.

Typically alloys are made on the lab scale by SPEX milling.  Despite decades of research, to our knowledge this method has not been optimized.  In fact the SPEX milling conditions commonly used to make alloy anodes are far from optimal and furthermore do not allow the use of soft metals (such as Sn) as starting materials [4].

The purpose of this work was to develop a lab-scale milling method to rapidly produce amorphous or nano-structured materials, and to produce in hours alloys that can take days or weeks to produce with other milling techniques.  To accomplish this, 325 mesh Si (Aldrich) was SPEX milled under many different conditions, varying ball size/amount, sample size/amount, temperature, and time.  Optimized conditions were then used to synthesize Si and Sn-based alloys.  Conditions vastly superior to those previously reported for producing amorphous phases by SPEX milling were found.  Most importantly, it was discovered that a reduction in ball size caused the grain size of Si to reduce dramatically during milling.  Figure 1 shows a comparison of the Si (111) XRD peak of 325 mesh Si (Aldrich) after being SPEX milled with different conditions.  The optimized method leads to a tremendous reduction in the grain size of the Si.

Given the success of the optimized SPEX milling method in Si grain size reduction, the question remains if the technique can rapidly produce nano-structured alloys.  Figure 2 shows the XRD pattern for a Sn30Co30C40 alloy produced by attrition, reported by Ferguson et al. [4].  Elemental Sn powder could not be used by this method, as soft elements, like Sn, would weld together in the attritor [4].  Instead, the Sn and Co were pre-alloyed to form CoSn2 by arc melting and annealing which added extra processing steps. In contrast, Sn-Co-C alloys could be successfully prepared simply from elemental Sn, Co and graphite powders using the optimized SPEX milling method.  An XRD pattern of the Sn30Co30C40 alloy prepared by this method is also shown in Figure 2.  Both methods produce an amorphous/nanocrystalline alloy.  However, the attritor method took 16 hours to produce the alloy with the XRD pattern shown, while the SPEX mill sample was produced in 3.5 hours.  This technique can greatly speed the screening of alloy candidates. 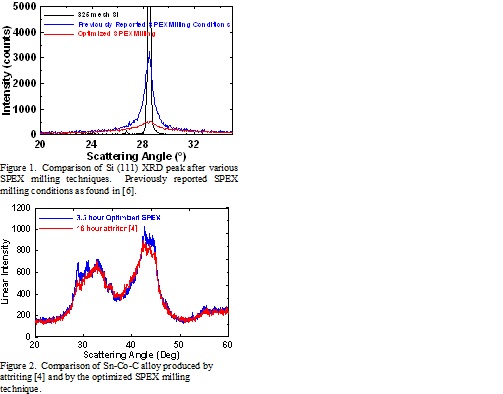