Russell A (Hyatt Regency)
G. Williams, R. Subramanian, C. F. Glover, S. John (Swansea University), and H. N. McMurray (Swansea University)
Despite recent developments which have led to a better understanding of the localized corrosion behavior of magnesium (Mg) in chloride electrolyte, there are certain characteristics which remain unclear. One such aspect is the enhanced electro-catalytic activity of the dark corroded Mg surface to cathodic hydrogen evolution, previously demonstrated in several recent publications. It has also been shown that in many instances, the time-dependent Mg corrosion rate increases in proportion to the area of cathodically- activated dark surface produced in the early stages of localized corrosion propagation. It has been proposed that the effect is due to enrichment in transition metal impurity phases on the anodically attacked Mg surface. However, direct evidence of such enrichment has proved difficult, although recent reports have located iron-rich particles within the corrosion product layer (1) and interfacial Fe enrichment on a corroded Mg by Rutherford backscattering spectroscopy (2). In this work the localized corrosion of commercial purity Mg, comprising a 280 ppm Fe impurity level, is investigated in the presence and absence of ethylene diamine tetra-acetic acid (EDTA), at different concentrations and pH values, when immersed in aqueous sodium chloride electrolyte. The aim of the investigation is to exploit the ability of EDTA to act as a chelating agent for Mg2+ and transition metal ions such as Fe2+, so that the principal influencing factors causing the propagation of cathodically activated dark regions on corroding Mg may be identified.

The presence of EDTA in 1 mol dm-3 NaCl (aq) at pH 6 is shown to markedly decrease the rate of Mg corrosion in freely corroding conditions, as shown by the plots of time dependent hydrogen evolution (HE) given in Figure 1. Increasing the concentration of EDTA progressively reduces the rate of HE and produces a change in kinetics, where a monotonic increase in the quantity of hydrogen evolved with time is observed. This is in contrast to the exponential relationship seen over the first 60 min immersion for the control experiment and at a lower EDTA concentration.  The decrease in corrosion rate is accompanied by a significant change in the visual appearance of the corroding surface. Although dark, expanding circular corrosion features propagate in the presence of 10-3 mol dm-3EDTA, no such behavior is observed when the concentration is increased by an order of magnitude, and the exposed surface remains covered by a cloudy white film. In-situ SVET shows no evidence of localized corrosion patterns characteristic of the un-inhibited case even over protracted immersion times of several hours. Similar observations are observed at higher pH although the influence of EDTA on bulk rates of HE are not as marked when compared to the control case. In separate experiments, where localized corrosion is allowed to propagate before EDTA addition to the corrosive electrolyte, significant changes in current density patterns are observed at the point of addition. This is shown in Figure 2, where EDTA halts propagation and the intense local anodic activity observed at the perimeter of the corroded area becomes displaced to the remaining intact (uncorroded) surface, although at significantly lower current density values.

The observations of a strongly mitigated HE rate seem to be inconsistent with a scenario where EDTA complexation of Mg2+ ions prevents deposition of surface corrosion product. A theory is proposed to explain the action of EDTA in terms of its ability to strongly chelate Fe2+, possibly present in the direct vicinity of the corroding Mg surface, in a situation where Fe-rich impurity phases become detached from the matrix and corrode independently of the matrix. The possibility of subsequent re-plating of Fe onto the corroding Mg to produce an electro-catalytically activated surface is considered. The acceleration of HE rates from corroding Mg surfaces on which iron re-plating has taken place is confirmed by experimentation.

Figure 2: SVET derived current density distribution maps obtained for freely-corroding CP-Mg in 1 mol dm-3 NaCl (aq) at pH10 after immersion for (i) 1h and (ii) immediately after the addition of 0.1 mol dm-3 EDTA to the electrolyte. 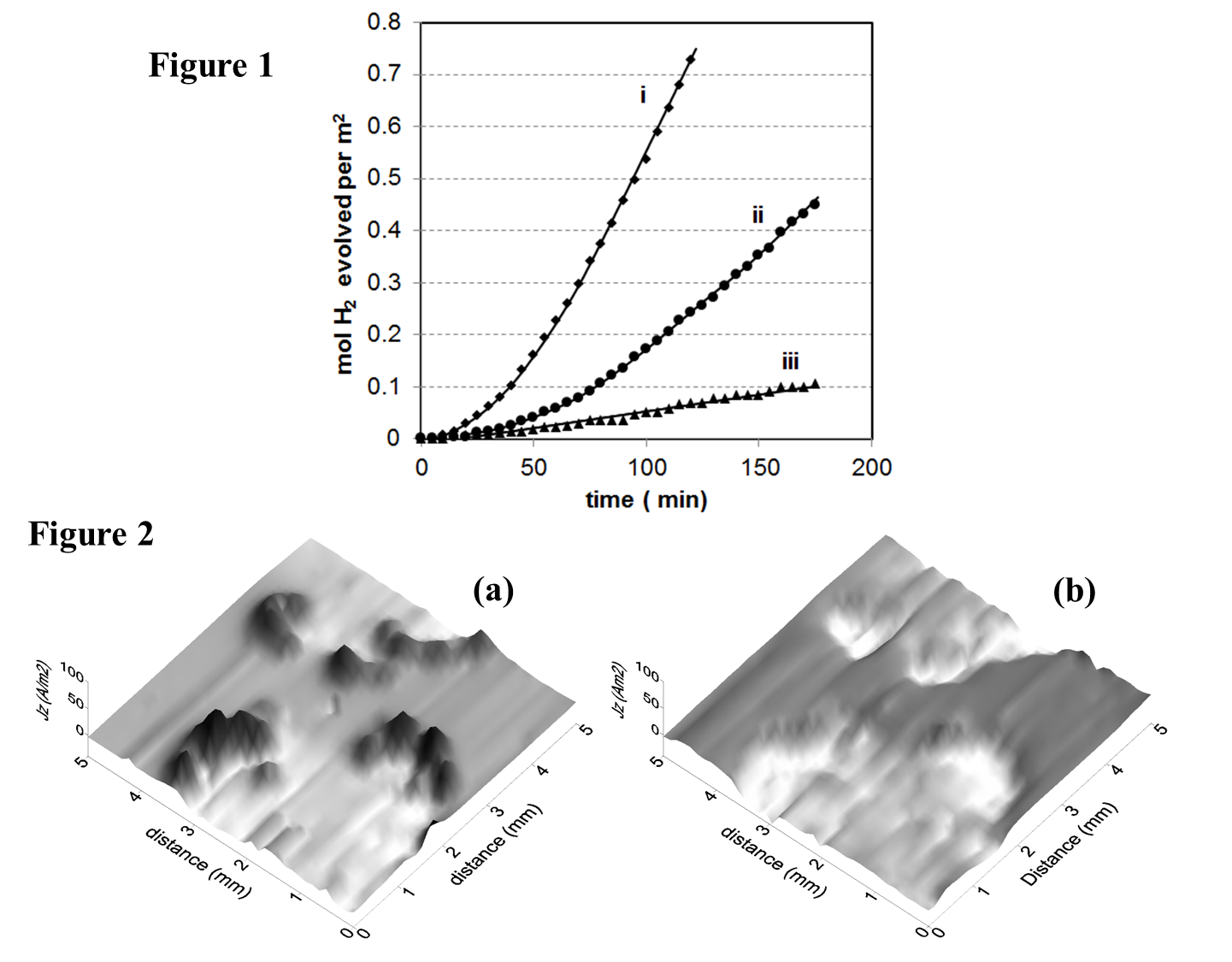