West Hall 1 (Phoenix Convention Center)
C. Koudelka (Tennessee Tech University) and C. A. Rice (Tennessee Technological University)
Polymer electrolyte membrane fuel cells (PEMFC) are a global contender to replace the internal combustion engines in automobiles. One key element for making PEMFCs viable for automotive applications is to improve their cold-start performance and survivability from sub-zero temperatures. The main factor limiting cold-start performance is the inherent presence of water—both residual and product water. Water within a fuel cell under subzero conditions has the potential to cause mechanical damage from ice lens formation and limit the diffusion of reactant gases during cold-starts. The DOE has set several automotive targets for 2010 regarding PEMFC freeze, identical to those for the internal combustion engine: survivability from -40˘ŞC and cold-start capability from -30˘ŞC. The 2010 cold-start performance target from -20˘ŞC, requires the fuel cell to attain 50% rated power in the first 30 seconds after start-up. Additionally, the maximum shut down energy expenditure is limited to 5 MJ, for functions—such as, drainage and dry out.

Common single cell testing methodologies of testing PEMFCs’ materials for subzero cold start applications include freeze/thaw cycling for durability and isothermal water fill tests for cold start approximation. These testing protocols are limited because of the massive thermal sink of the fixtures endplates. In a stack of 350 or more repeat cells there is exothermic heating from adjacent cells. An adiabatic single cell fuel cell fixture was developed in 2004 at United Technologies Research Center.[1] The goal of the proposed work presented herein is to further refine the design and testing methodologies.

A quasi-adiabatic single-cell fuel cell fixture was designed, built, and validated to emulate cold starts at the stack level, see Figure 1. This cell meets or exceeds internal requirements for pressure distribution at the MEA/GDL interface based on both modeling and mechanical testing. Balsa wood (vs synthetic alternatives) was used as a rigid insulation material. With the current fixture geometry (16cm2 active area), stresses do not exceed the ultimate stress of the weakest piece of balsa. To examine thermal distribution, the cell was frozen to a uniform temperature and heated using embedded heating pads as guard-heaters with a constant heat flux. This temperature data was then input into a finite element model in COMSOL. It was found that a large degree of insulative and guard-heat ability was obtained noted by the zero heat flux condition of the model results within the graphite flow field. Galvanic and potentiostatic cold starts were performed with the fuel cell fixture and show limitations in the MEA and the fuel cell test station. The galvanic tests set to 600 mA cm-2 were dominated by sufficiently high membrane resistances such that the fuel cell test station could not apply a constant current condition forcing the cell to be ramped up from a voltage minimum of less than<0.1V. Potentiostatic cold starts were set to 0.1V till the current attained a value of 600 mA cm-2. 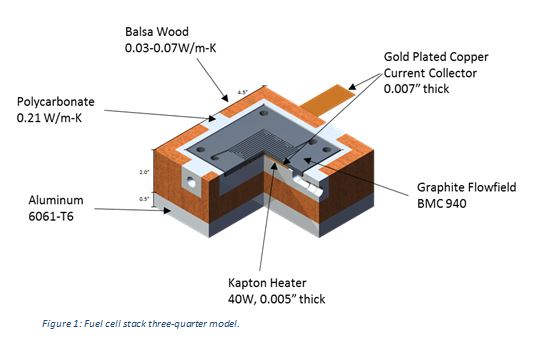