Russell A (Hyatt Regency)
D. R. Banjade, J. Harb (Brigham Young University), and S. Porter (Brigham Young University)
New environmental regulations, good mechanical properties, abundant availability and reduced cost have generated renewed interest in the wider use of magnesium (Mg), especially in the automobile and aerospace industries [1]. The main obstacle to the use of Mg is its susceptibility to corrosion. Fortunately, its corrosion rate is limited to some degree by the relatively slow rate of hydrogen evolution on the surface of magnesium.  However, the rate of corrosion increases significantly when Mg is galvanically coupled to another metal, such as steel, which coupling leads to increased rates of hydrogen evolution [2]. Although galvanic coupling of Mg results in increased corrosion, self-corrosion does not stop entirely and varies throughout the corrosion process. In this study, we examine the relative roles of self-corrosion and galvanic corrosion for magnesium that is galvanically coupled to carbon steel.

As described previously [3] samples tested consisted of the exposed end of an Mg rod (99.95%, GalliumSource), 3mm in diameter, that was insulated and surrounded by a mild steel electrode.  The steel electrode was a cylinder with an inside diameter just large enough to accommodate the insulated Mg rod and an outer diameter of either 8, 12 or 16mm.  This structure (Mg surrounded by steel) was cast into epoxy (EpoThinTm2 Epoxy System, Buehler) for testing. After casting, samples were cross-sectioned with a diamond saw, and each surface was polished prior to submersion in the 5 wt% NaCl electrolyte. The concentric Mg and steel electrodes were galvanically coupled by electrically connecting them external to the solution through a zero resistance ammeter, which also permitted direct measurement of the galvanic current.  Inductively Coupled Plasma-Mass Spectroscopy (ICP-MS) was used to directly measure the amount of Mg dissolved during the experiment. The difference between the total corrosion, as measured by magnesium dissolution, and the total amount of galvanic corrosion (from the integral of the galvanic current) provided the amount of self-corrosion.

Previous attempts to model Mg corrosion have noted a discrepancy between the measured and predicted corrosion rates [5-6]. One possible reason for this might be the influence of the changing rate of self-corrosion, which represents a significant fraction of the corrosion rate for galvanically coupled systems. In this study, we combine experiments and numerical simulations to investigate the roles of self-corrosion and galvanic corrosion for Mg in NaCl solutions. In particular, the influence of the active surface area and changing hydrogen reaction rates are explored.

The authors wish to thank CD-adapco for their generous funding of this work. 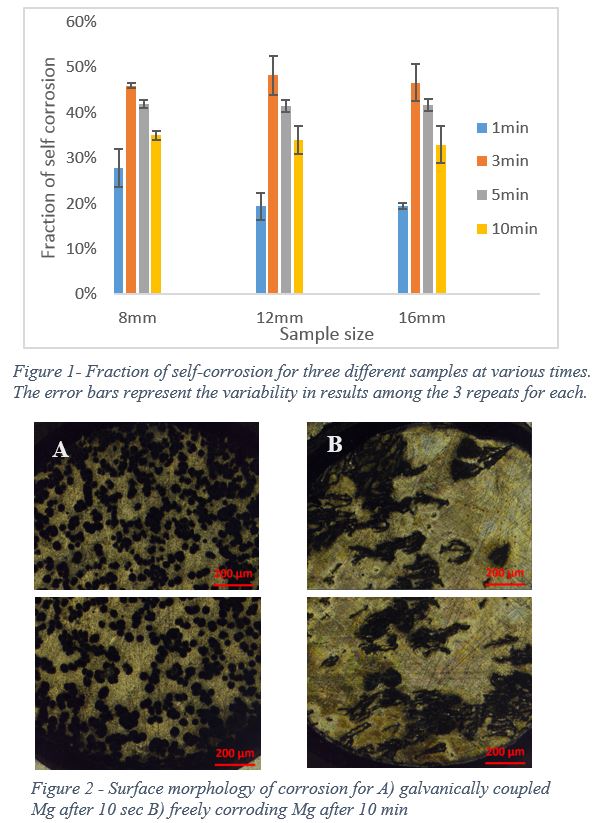