West Hall 1 (Phoenix Convention Center)
X. Geng (Northeastern University) and E. J. Podlaha (Northeastern University)
Nanogap electrodes are elements of nanoscale microfluidic devices and sensors, and have been prepared by different techniques, as recently reviewed by Li et al.1 Their use in biomedical microelectromechanical systems (Bio-MEMS) for molecular detection requires the gap dimensions to be of the same order as the target molecule ~10 nm. Several effective strategies to fabricate nanogap electrodes include: on-wire lithography with segmented nanowires that are etched, 2-3 using a mechanically controllable break junction,4 focused ion beam lithography,5 and by electrodepositing a metal directly onto separated lithographic wires to fill in the separated space to reduce the gap size to the nanometer range.6  The approach studied here is to create electrodeposited nanowires with a sacrificial layer to create the gap. Examples of chemically etched inner regions of electrodeposited nanowires have been demonstrated in trilayers of Au-Ni-Au,2,7 Au-Ag-Au,2-3 Au-Cu-Au,8 and the quinary FeNiCo-Au-Cu-Au-FeNiCo.8 In this work, tri-layered nanowires with FeNiCo and either Cu or oxide regions, FeNiCo-Cu-FeNiCo, and FeNiCo-oxide-FeNiCo, are electrodeposited using the template method. Nanogaps are prepared by chemically etching the sacrifice layer, i.e., Cu, or the oxide layer, prepared in different ways. Conditions to ensure that the wires are robust before etching and that they form reproducible nanogaps are presented.

Conditions used to deposit and etch the nanowires were determined from rotating cylinder studies. Fe-rich, FeNiCo conditions were selected. The electrodeposition of the tri-layered nanowires was fabricated in a standard three electrode cell with a polycarbonate membrane as a template. FeNiCo was pulsed deposited from a sulfamate-boric acid electrolyte at a pH of 2 and at a temperature of 40 °C. Cu was either galvanostatically deposited or deposited by displacement from a citrate-boric acid electrolyte at a pH of 2 and at room temperature. All nanowires were removed from the template and placed on a substrate to chemically etch the sacrificial, middle layer in an etching solution containing: 0.01 M sodium sulfate, 0.45 M sodium citrate, and 0.40 M boric acid at a pH of 5. The nanowires and their resulting gaps were inspected by FE-SEM (Hitachi S4800).

Figures 1 and 2 show gap regions between two FeNiCo segments that are generated after the etching step. Figure 1 shows examples of gaps created from a sacrificial Cu layer, and Figure 2 shows gaps generated from a sacrificial oxide layer. The Cu region was created by either electrodeposition, Figure 1 (a), or by displacement, Figure 1 (b). The smallest gaps were achieved using the Cu displacement technique. The gaps were not reflective of the charge passed during Cu deposition and was attributed to the generation of an Fe-rich oxide. Replacing the Cu sacrificial layer completely with an Fe-rich oxide layer, Figure 2, also resulted in reproducible gaps < 10 nm. Figure 2 (a) shows the gap region when the applied potential, after the first FeNiCo layer, was maintained at the open circuit potential (OCP), and Figure 2 (b) shows the gap created at an anodic potential value of 0.4 V vs OCP. When the potential was anodic, the second FeNiCo layer created a “tip” at the gap surface.

Sub-10 nm nanogaps were developed through template electrodeposition via etching of a Cu or oxide layer. The results suggest that a sacrificial Cu layer is effective, but unnecessary, and that a nano-gap can be created by the generation of an oxide from the FeNiCo layer at OCP. The oxide can also impart a tip shaping effect when it is created at an applied potential that is in the anodic region.

The authors thank Roche Diagnostics for generous support of this project. 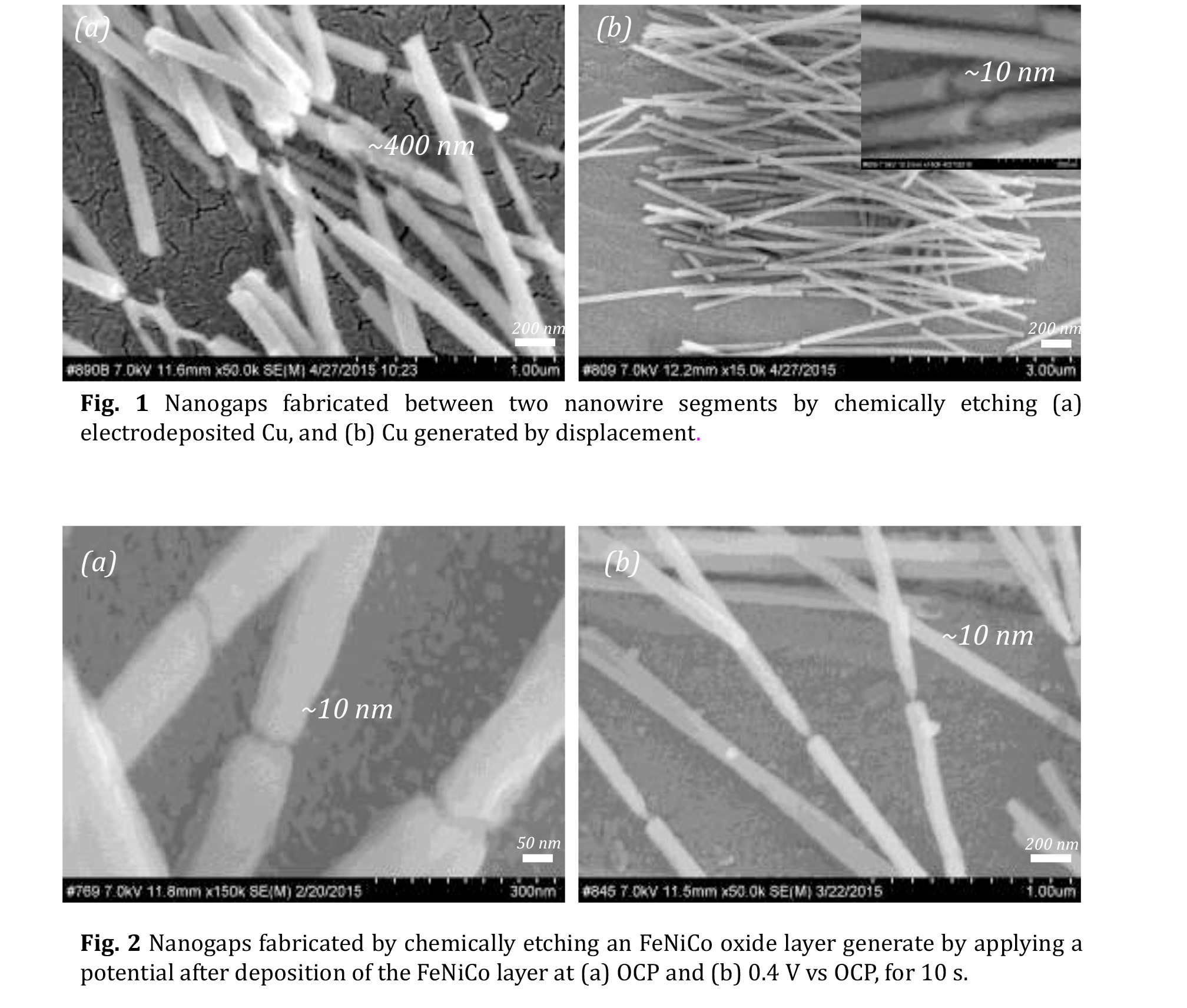