West Hall 1 (Phoenix Convention Center)
Y. C. Wang, D. Cokeliler (Baskent University), and S. Gunasekaran (University of Wisconsin-Madison)
Bisphenol A (BPA) (2,2-bis(4-hydroxyphenyl propane, C15H16O2) is a key monomer ubiquitously used in the production of polymers, polycarbonate plastics, sealants, epoxy resins, the lining of food cans etc1. However, BPA could potentially interfere with the endocrine system of humans and is believed to be indicated in diverse pleiotropic actions in the brain and cardiovascular systems, various kinds of cancer, reproductive disorders, obesity, and birth defects, etc1. Given the deleterious effects of BPA and its omnipresent presence in our daily life, the development of a rapid, simple and sensitive analytical method for BPA measurement is critical. Several approaches are used to determine BPA2, which include but not limit to liquid chromatography-mass spectrometry (LC-MS), gas chromatography-mass spectrometry (GC-MS), enzyme-linked immunosorbent assay (ELISA), and liquid chromatography-electrochemical detector (LC-ECD). Although these methods could detect BPA sensitively, complex, time-consuming sample preparation protocols and expensive equipment used are major disadvantages. Electrochemical methods, on the other hand, are rapid, inexpensive, simple, and highly sensitive; moreover, they are amenable for fabrication of portable units.

Figures 2a, b, and c displays the SEM images of the working electrode part of bare SPE, GO/CNT-modified SPE, and RGO/CNT/AuNPs-modified SPE, respectively. The bare SPE, shows sheet-like structures with many small particles dispersed throughout (Figure 2a). These structures can be assigned as graphitic carbon powder, according to the composition of the electrode. Figure 2b demonstrates the CNT could improve the surface roughness and potentially bridge the graphene sheet and small particles of graphitic powder. After electrodeposition of AuNPs, the AuNPs are seen evenly distributed in the RGO/CNT network (Figure 2c). Based on particle size analysis of at least 100 particles in SEM images, the average size of AuNPs was 84.6 ± 23.6 nm. Figure 3a displays the cyclic voltammograms of ferri/ferrocyanide solution at bare, GO/CNT-, RGO/CNT-, and RGO/CNT/AuNPs-modified SPEs. The electrochemical response at the bare SPE (at 50 mV·s-1scan rate) displays a relatively slow electron transfer and an irreversible electrochemical process. When modified with GO/CNT, the peak separation increased along with a reduction in the redox peak current. After GO is reduced to RGO (i.e., became RGO/CNT modified SPE), as expected, the redox peak current raised with a much smaller peak separation, which implies that most of the oxygenated groups on GO were removed and electron transfer was improved. The electrochemical response was further significantly enhanced after the electrodeposition of AuNPs, which is attributable to the extraordinary catalytic ability, large surface-to-volume ratio, and excellent electrical conductivity of the AuNPs.

Several important parameters, such as accumulation potential and time of differential pulse voltammetry, and pH value of buffer solution were investigated and optimized. Under the optimized conditions, the oxidation peak current in differential pulse voltammograms was proportional to BPA concentration in the range of 1.45 to 20 and 20 to 1,490 nmol/L of BPA, with an ultralow detection limit of 800 pmol/L (at signal/noise=3).

Figure 2. SEM images of (a) bare, (b) GO/CNT-modified, and (c) RGO/CNT/AuNPs-modified SPEs 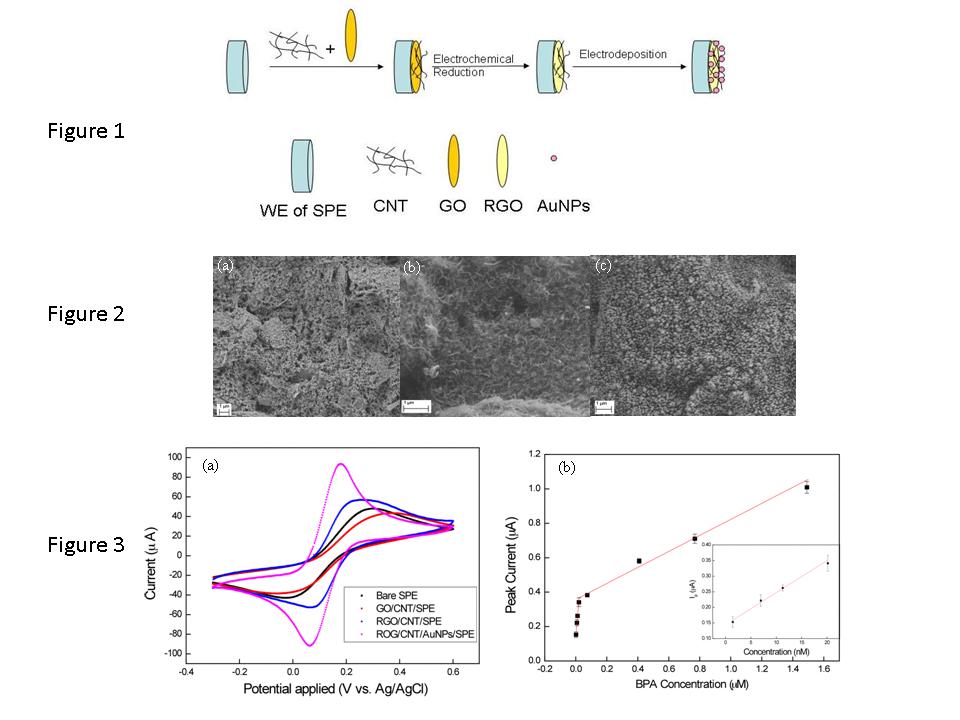