Ellis West (Hyatt Regency)
C. H. Chu, I. Sarangadharan (National Tsing Hua University), A. Regmi, Y. T. Chen (Institute of NanoEngineering and MicroSystems), and Y. L. Wang (National Tsing Hua University)
According to the statistics published by the World Health Organization (WHO) in 2011, cardiovascular disease (CVD) is the leading cause of death globally. In 2008, one thousand seven hundred thirty people die from cardiovascular diseases. This number represents thirty percent of all deaths in the world. Recent studies suggest that the level of C-reactive protein can be an important indicator of a person’s risk for cardiovascular disease. Based on the report from the American Heart Association (AHA), concentrations of CRP in the blood between 1 and 3 mg/L represent a moderate risk of heart disease and concentrations higher than 3 mg/L indicate the high risk for CVD. In this study, we detect low concentration of C-reactive protein (1 fM) electronically by immobilizing CRP-specific aptamer on the AlGaN/GaN HEMT based biosensor, showing that this technique is promising for biosensor applications.

The structure of CRP-specific aptamer immobilized HEMT is consisted of a 3 μm-thick undoped GaN buffer layer and undoped Al0.25Ga0.75N layer. The AlGaN layer was used to induce high spontaneous polarization, which generated a two-dimensional electron gas at the interface between AlGaN and GaN layer. After AlGaN/GaN thin film was grown by metal-organic chemical vapor deposition (MOCVD) on silicon substrates, we did the following procedures to complete AlGaN/GaN HEMTs sensors. Mesa is the first layer. Mesa isolation was done by using an Inductively Coupled Plasma (ICP) etching system with Cl2 /BCl3 gases under ICP power of 300 W at 2 MHz and a process pressure of 10 mTorr. Source/drain metal forming ohmic contact is the second layer. Ohmic contact consisted of e-beam deposited Ti/Al/Ni/Au was annealed at 850 ºC, 45 second under nitrogen atmosphere. The third layer is final metal as the extension of electrode wire. The last layer is gate metal. The source and drain of HEMT were covered by photoresist except the gate region. The aptamer was immobilized on the gate region followed by surface blocking with bovine serum albumin (BSA). The CRP solutions prepared in 1X PBS were then added on the sensing region for binding with the aptamer. After affinity binding process between the CRP and aptamers,the sensor was washed with 1X PBS to remove the unbound CRP and 1X PBS was added on the sensor for electrical measurements. The sensor was measured by applying a dc bias of drain-source voltage and gate voltage. The drain current (Id) of the transistor was recoded in real-time when the drain-source voltage and the gate voltage were applied. In order to amplify the signals as large as possible, the total charges was counted by integrating the drain current with the time. 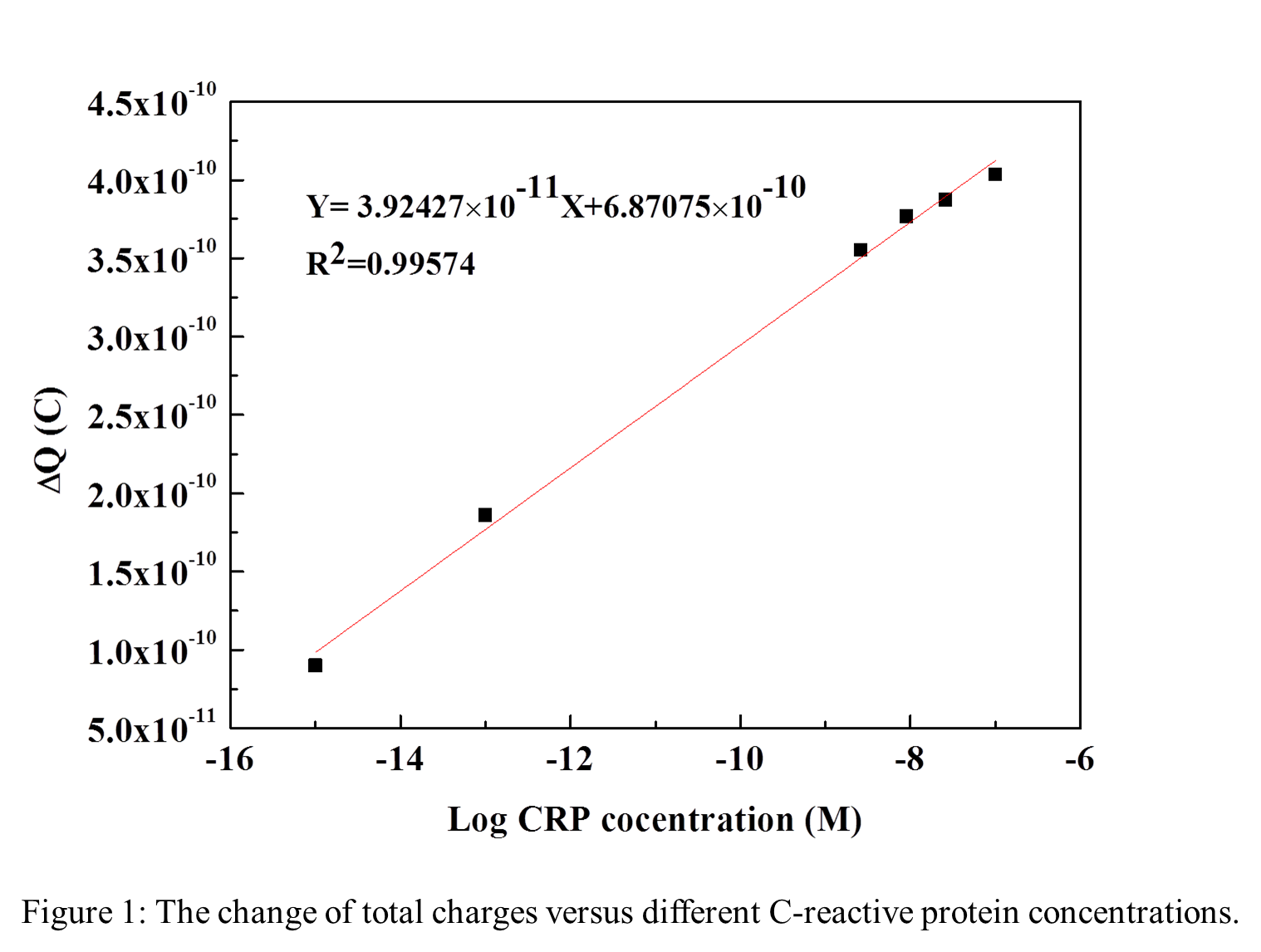