212-A (Phoenix Convention Center)
P. P. Patel (Dept. of Chemical Engineering, University of Pittsburgh), M. K. Datta (Department of Bioengineering, University of Pittsburgh), P. Jampani (Department of Bioengineering, University of Pittsburgh), and P. N. Kumta (University of Pittsburgh, Pittsburgh, PA 15261)
The rapid depletion of fossil fuels and increased environmental pollution due to vast fossil-fuel consumption is a thrust for efficient use of energy and exploration of renewable and clean energy sources.1 Generation of electricity from renewable energy sources, such as solar, wind without producing carbon dioxide-an undesired green house pollutant, offers enormous potential for meeting future energy demands. In this direction, fuel cell technology has gained special attention as it provides promising and sustainable approach for the production of continuous power with reduced greenhouse gas emissions and higher efficiencies compared to combustion based technologies. In particular, direct methanol fuel cells (DMFCs) have got attention as power sources due to advantages like use of methanol as fuel which has higher energy density (3800 kcal/l) than hydrogen (658 kcal/l, used as a fuel in proton exchange membrane fuel cells), safety and ease of handling the fuel (than H2) and low operating temperature. This offers quick start-up and extended durability of system components. The simple system design would be reflected as an ease in operation, reduced cost and high reliability. Hence, they are considered to be an ideal energy source for applications like automobile, portable devices, stationary systems, etc.2One of the major constraints in the development of high performance DMFCs is the low power density of the system due to poor catalytic performance at the electrodes and high capital cost due to use of expensive noble metal electro-catalysts. Hence, it is important to explore new electro-catalyst with reduced noble metal content at both anode and cathode to enhance the efficiency and power density of DMFC.

High surface area Pt(Ru)/MN (~125 m2/g) has been synthesized by wet chemical approach employing non-halide precursors of Pt and Ru. The electrochemical characterization has been carried out in 1 M methanol and 0.5 M sulfuric acid, used as fuel and electrolyte, using Pt wire as counter electrode and Hg/Hg2SO4 as reference electrode (+0.65 V with respect to NHE) and Pt loading of 0.3 mg/1cm2 at 400C. Pt(Ru)/MN shows promising performance for methanol oxidation, showing ~52% improved catalytic activity at ~0.65 V (vs NHE) in half-cell configuration and ~56% higher maximum power density in single DMFC study (Fig. 1) than that of commercial JM-Pt(Ru). This is attributed to well-dispersion of Pt(Ru) on MN (support of surface area of ~125 m2/g) offering high utilization of noble metals Pt and Ru, along with superior electrochemical active surface area and low charge transfer resistance for Pt(Ru)/MN than that of JM-Pt(Ru). Pt(Ru)/MN also shows superior electrochemical stability in half-cell configuration and single DMFC study than JM-Pt(Ru) electro-catalyst. Thus, the present study demonstrates the potential of MN as a support in improving the electrochemical activity of Pt(Ru) electro-catalyst, in the aim of achieving superior electrochemical performance and stability with reduced noble metal content for the electro-catalyst of DMFC.

This portends significant reduction in the overall capital cost of DMFC system. Results of the synthesis, structural characterization and electrochemical activity of these electro-catalysts will be presented and discussed. 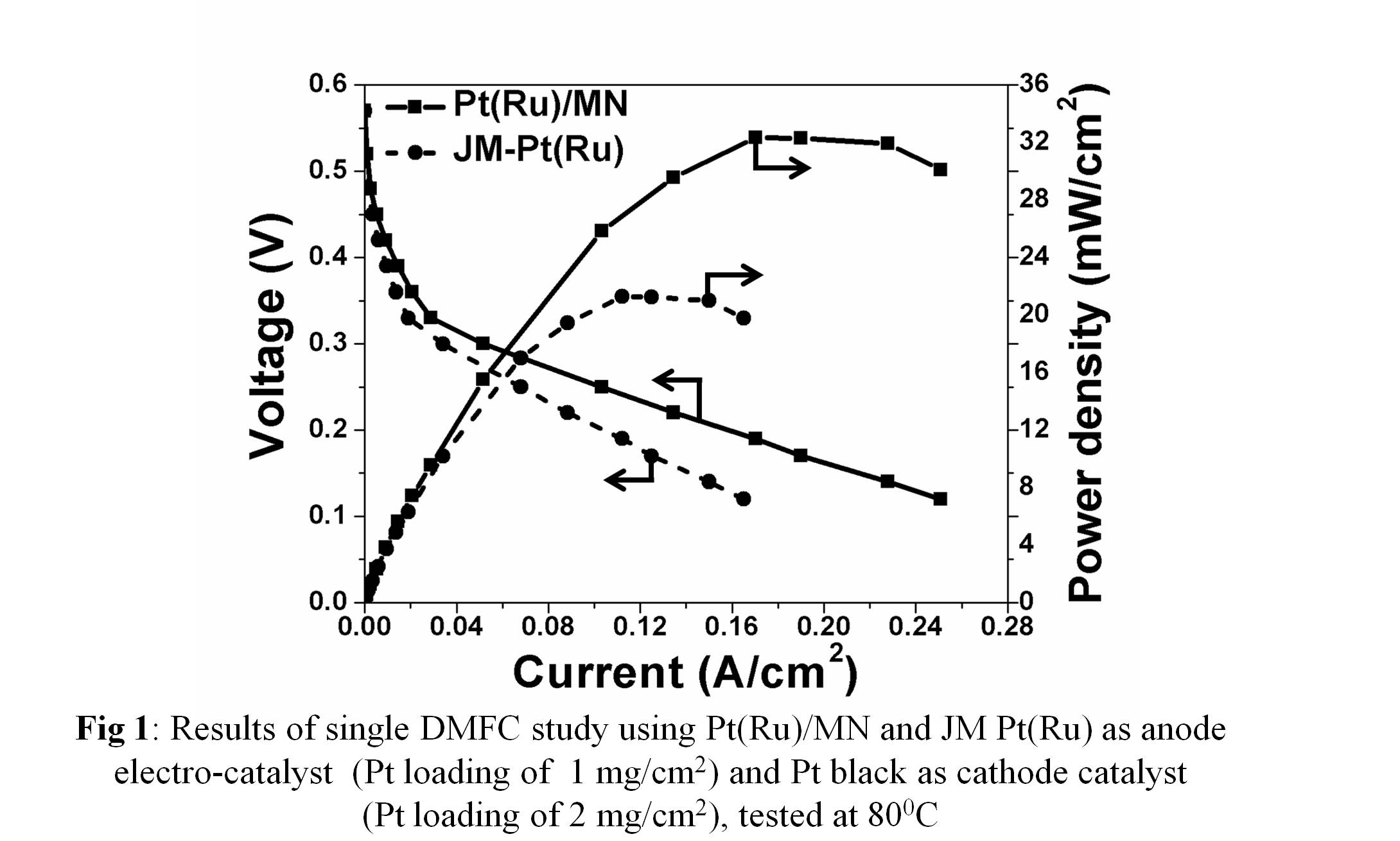