West Hall 1 (Phoenix Convention Center)
S. Zahmi (Northeastern University) and E. J. Podlaha (Northeastern University)
Zinc alloys with copper and tin are of interest for a variety of applications,1–3 and due to their disparate equilibrium potentials are often electrodeposited with complexing agents, such as cyanide, to shift their potentials more closely together. Other more environmentally friendly alternative complexants have been examined, such as citrate, and conditions demonstrated to achieve electrodeposited Cu-Zn4 and Sn-Zn-Cu5 alloys.  Several models of the Zn reduction mechanism have been proposed and involve of an adsorbed intermediate in Zn reduction.6-8In this study, the influence of codepositing Cu (or Sn) on the Zn partial current density and reaction order is reported.

Due to the inherent low current efficiency expected in zinc and zinc alloy deposition an upward facing rotating disk electrode was used. Polarization data was obtained for Cu, Sn, Zn, CuZn, and SnZn using a Pt counter electrode and a silver/sliver chloride reference. The aqueous electrolytes contained 10 mM CuSO4, ZnSO4 or SnSO4 , 60 mM sodium citrate, 500 mM Na2SO4 and 1 mM hydroquinone. Three different ZnSO4 concentrations were examined to assess the reaction order of Zn when deposited as an elemental deposit, and when Zn is codeposited with CuZn, and SnZn, where the metal:citrate ratio was maintained at value of 0.5.  The pH was adjusted to 2 using sulfuric acid and electrolytes were at room temperature. Deposits were fabricated at constant potential of -1.25 V vs Ag/AgCl for 30 min, and the composition characterized using X-ray fluorescence spectroscopy. Ohmic drop was measured with electrochemical impedance spectroscopy (EIS). EIS was also used to characterize the deposition of CuZn and SnZn with a frequency range from 0.1 to 100K Hz.

The authors wish to acknowledge support by the Embassy of United Arab Emirates in Washington DC, USA 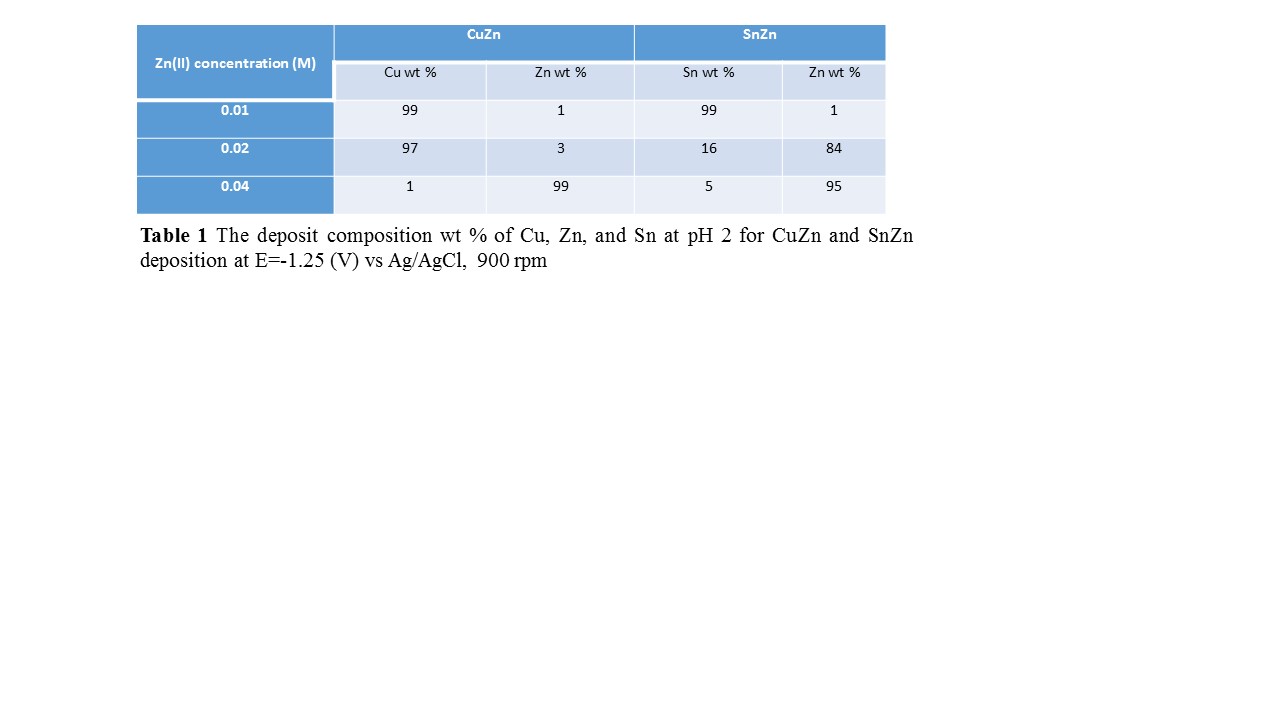