106-C (Phoenix Convention Center)
M. Pallapa (York University) and P. Rezai (York University)
Lateral Flow Assays (LFA) are used to detect the presence of specific analytes such as hormones, toxic chemicals or pathogenic microorganisms in various fluidic specimens[1]. Typical applications of LFA devices have been demonstrated in medical diagnostics, food and beverage manufacturing and water monitoring[2-4]. The fluidic specimens that are added to the LFA sample pad flow via capillary forces along a nitrocellulose membrane consisting of coloured nanoparticles and capturing agents at specific locations of the membrane. The target analytes bond to the coloured nanoparticles immunologically and get immobilized downstream by capturing agents on these specific locations. This generates visibly noticeable bands due to continuous accumulation of target analytes. Although LFA devices offer important commercial advantages such as portability, ease-of-use and cost effectiveness, the test result is based on visual interpretation of the coloured nanoparticle-analyte conjugation bands. Visual interpretation is often prone to human error and is inaccurate, subjective and non-quantitative.  Optical scanning readers have been developed[5, 6] that are based on image acquisition and processing algorithms. They only rely on the reflective signals (i.e. colour intensity) collected from the surface of the devices to quantify the results. A large amount of signal corresponding to the nanoparticles trapped inside the bulk of the membrane is lost leading to unsatisfactory detection limits and sensitivities. In this work we demonstrate a novel and low-cost thermal sensing approach for quantitative measurement of analyte concentration by exploiting the inherent thermal properties of the nanoparticles accumulated in the bulk of the membrane in LFA devices.

An infrared (IR) sensor (Melexis-MLX90614) was mounted on a custom-made XY scanning stage (Fig.1a). A 3D printed structure assembled to the stage housed the LFA test strip and a thermoelectric heater (ThorLabs TEC3-6) (Fig.1a inset). The LFA was performed on a commercial 20mIU (mili International Units) human Chorionic Gonadotropin (hCG) test strip using a positive 20mIU hCG control solution that resulted in a dark control band and a visibly lighter test band (Fig.1b). The distance between the sensor and the test strip was determined by the distance to spot ratio (11.45:1) of the IR sensor. The 3D printed structure and the LFA strip were completely covered with aluminum tape excluding two windows that were opened for the test and the control bands. The polished surface of the aluminum tape had a very low emissivity (0.03) and subsequently assisted in acquiring the relevant thermal data only from the test and the control bands. The XY scanning stage and the real time measurement of the temperature were controlled electronically via an Arduino Uno R3. The heater was energized by a Keithley 2410 source meter to three equilibrium actuation temperatures. The sensor was scanned over the strip in the forward and backward direction to measure the thermal signatures of the test and the control bands.

The thermal data measured by the IR sensor and acquired in real-time by the Arduino Uno R3 was analyzed. Fig.2 shows the thermal characteristic of the heated LFA strip for one scanning cycle (i.e. forward and backward scan). Two distinct temperature levels in each major peak are observed that represent the test and the control bands. Fig.3 presents the change in the temperature (DT) between the test and control bands at the three tested equilibrium actuation temperatures. The different temperature levels between the control and the test bands at equilibrium temperatures implies a positive correlation between the amount of nanoparticle-analyte conjugation and the emitted thermal energy. From this result it is evident that the test band has a lower temperature level compared to the control band at each equilibrium temperature because of the lower concentration of nanoparticle conjugated target analyte trapped in the bulk of the nitrocellulose membrane. This may be used in the future to extract valuable information from the LFA device such as the exact concentration of the target analyte captured in the bulk of the bands, rather than the surface of the membrane as currently practiced by the optical scanning methods.

The demonstrated thermal modality exploiting the nanoparticles in the bulk of the LFA membranes will be suitable for the development of a low-cost quantitative LFA reader with improved detection limit, sensitivity, and dynamic range when compared to the existing commercial optical scanners. 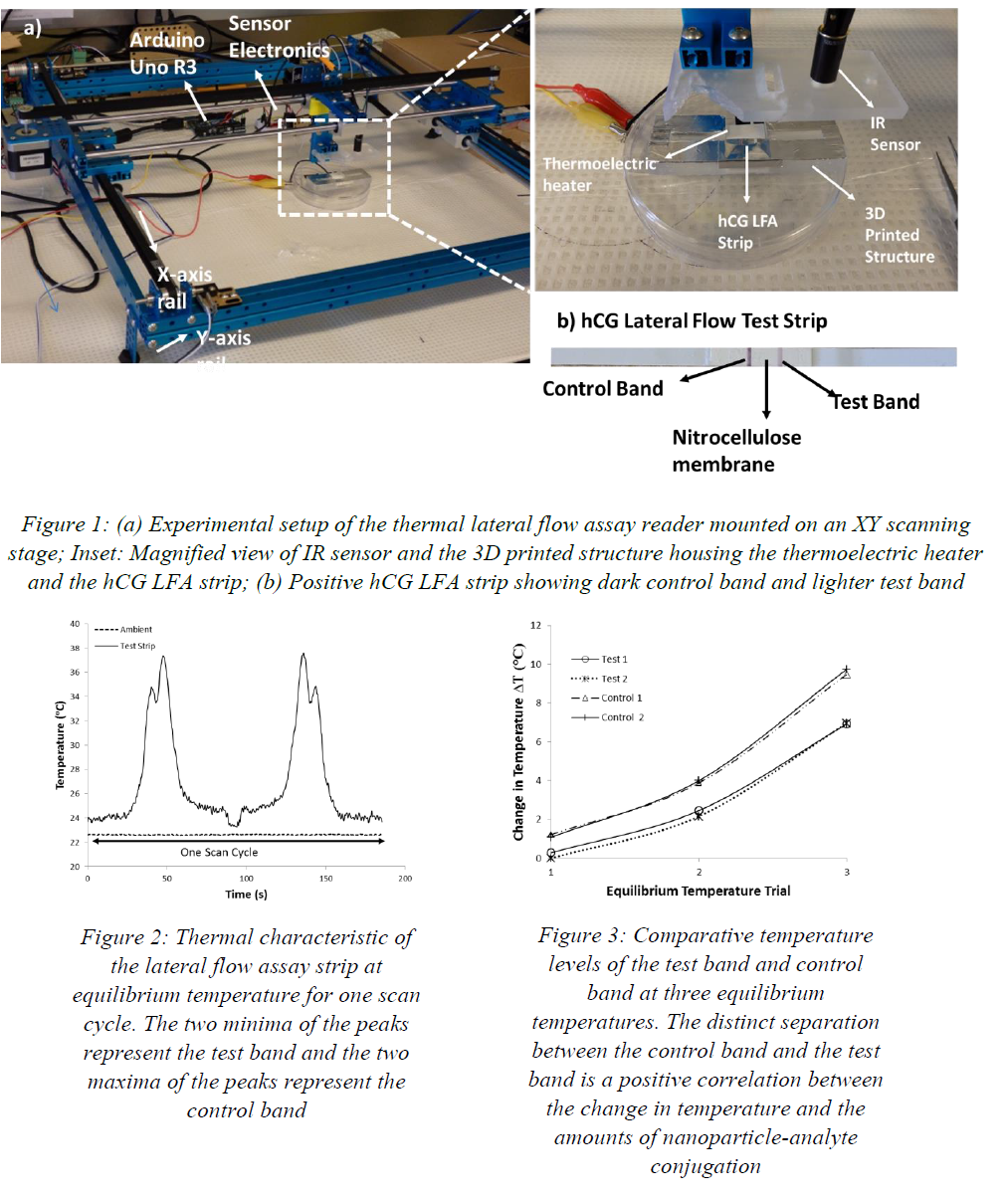