1603
The Effect of Intra Vs. Intermolecular Proton Transfer on the Oxidation of Phenylenediamine-Based Ureas

Borein B (Hyatt Regency)
D. K. Smith (San Diego State University) and R. He (San Diego State University)
Recently, we have been examining the role that H-bonding intermediates play in the mechanism of proton-coupled electron transfer using an electroactive phenylene-diamine based urea, U(H)H (Clare et al., J. Am. Chem. Soc. 2013, 135, 18930-41).  This compound appears to undergo a reversible one electron oxidation to the radical cation in methylene chloride that in fact corresponds to two electron oxidation of half the ureas to the quinoidal form, accompanied by proton transfer to the dimethylamino group and subsequent deactivation of the other half of the ureas, 2U(H)H = U(H)+ + H(U)H+ + 2 e-. The reaction gives chemically irreversible voltammetry in acetonitrile as would be expected given that the product quinoidal cation, U(H)+, is harder to reduce than the initially formed radical cation.  However, it gives reversible voltammetry in methylene chloride because the reverse reaction can proceed through the H-bonded complex formed between U(H)+ and H(U)H+, which is easier to reduce than the quinoidal cation.

In new work reported here, we have modified U(H)H by replacing the phenyl group with an imidazole group, compound 1 in Fig. 1.  With 1, the two major conformers, 1a/1b, both present a donor-donor-acceptor (DDA) H-bond motif  and therefore are capable of binding compounds with the opposite (AAD) motif through three H-bonds.  While our plan is to investigate the electrochemistry of 1 in the presence of such guests, initial voltammetry of 1 by itself has produced interesting results that are quite different from those observed with U(H)H. CV’s of 1 in both acetonitrile and methylene chloride show two, closely-spaced, reversible waves of equal height. This contrasts with CV’s of U(H)H where only a single CV wave is seen that is reversible in methylene chloride and irreversible in acetonitrile. We hypothesize that this difference is due to rapid intramolecular proton transfer in conformer 1b, Fig. 1, after one electron oxidation.  This beats out the intermolecular proton transfer that occurs with U(H)H and leads to deactivation of half of the ureas. Unlike U(H)H, with 1, complete two electron oxidation of all the ureas near the electrode is possible, although the second oxidation occurs at a slightly more positive potential due to the positive charge remaining on the molecule after the first oxidation. Interestingly, there is also a strong concentration dependence to the CV’s. When the concentration increases, the relative currents of both peaks decrease. We hypothesize that this is because the highly acidic doubly oxidized product produced at the electrode can protonate reduced 1 coming in from the bulk in a secondary intermolecular proton transfer. Since the dimethylamino group is the most basic site on 1, it gets protonated, resulting in the deactivation of incoming urea. When the concentration increases, this transfer will be faster, resulting in a smaller amount of active urea reaching the electrode.  Thus, although rapid intramolecular proton transfer in 1 allows for complete oxidation of 1 near the electrode, in the bigger picture, intermolecular proton transfer still results in less than full oxidation of all the urea. 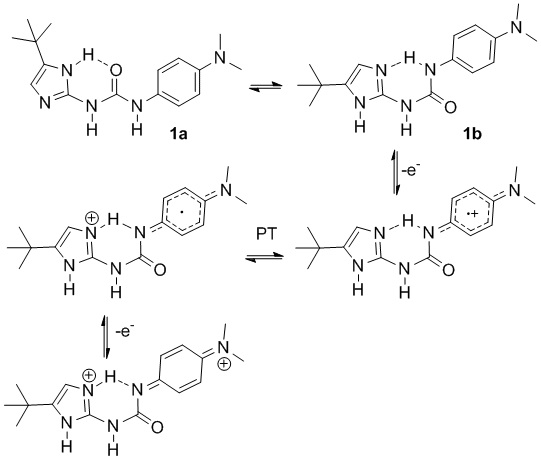