On the other hand, we have been studied layered double hydroxide (LDH) as a hydroxide ion conducting material [1-3].  LDHs are consisting of positively charged metal hydroxide layer and interlayer anions for charge compensation of cationic layer. The general formula for LDHs is [MII1−x MIIIx(OH)2][(An−)x/n • mH2O], where MII is a divalent cation such as Ni2+, Mg2+, Zn2+, etc., and MIII is a trivalent cation such as Al3+, Fe3+, Cr3+, etc., and An− is an anion such as CO32−, Cl−, OH−, etc.  We have recently reported that LDHs intercalated with CO32- showed high ionic conductivity of the order of 10-3 S cm-1under humidification, and the LDHs are solid hydroxide ion conductors [1-3].

In this study, Ni-Fe LDH intercalated with CO32− (Ni-Fe CO32− LDH) was used as a hydroxide ion conductive material.  The pellet of Ni-Fe CO32− LDH as an electrolyte was sandwiched with electrodes using Pt/C as a catalyst and Ni-Fe CO32− LDH as an ionomer. The oxygen concentration at the O2 product side was determined using a gas chromatography system.  The electrochemical oxygen product flow was confirmed to be proportional to the external current density at 50oC under 70% of relative humidity, indicating that the membrane functioned as electrochemical oxygen separator. 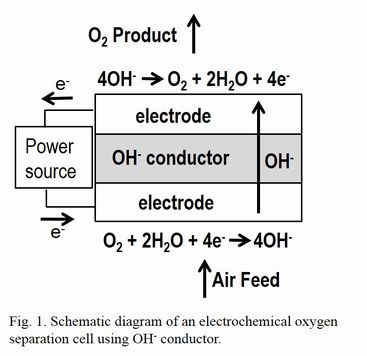