The chemistry of vanadium is noticeable since four oxidation states are adjacent (+2, +3, +4, +5), moreover, vanadium can be founded in 65 different minerals and fossil fuel deposits such as petroleum, coals, lignite, oils, pet-coke and so on [1].

Due to the nature and complexity of vanadium samples, it is necessary to set up an analytical technique easy, fast and inexpensive. In this paper, the electrochemical measurement of multivalent cations concentration (EM2C2) technique is extended and demonstrated to determine the concentration of the redox pair V(IV)/V(V) in aqueous solutions simultaneously.

The EM2C2 technique consists in the measurement of the limiting current under diffusion limitations using a rotating disk electrode [2]. Different parameters in the technique were investigated, such as scan rate potential, rotation rate of the electrode, and interferences in the measurements.

Preliminary results show that V(IV) and V(V) could be determined measuring the upper and lower limiting current, respectively (Figure 1).

Preliminary results demonstrate that simultaneous quantification of V(IV) and V(V) could be achieved in 1 minute with a detection limit of 1.0 mM for both species.

However, due to the complexity of the samples, other factors may cause interferences in the measurements. Further results will be presented at the meeting including the effect of electrolyte, rotating speed and the presence of other ions in solution. 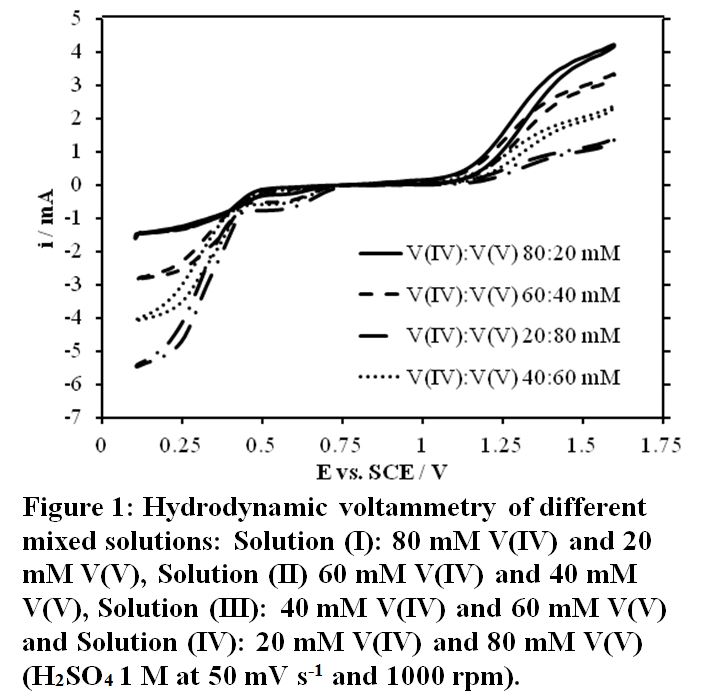