In this study, we investigated the effect of filtrating the buffer layer between the indium tin oxide (ITO) and bulk heterojunction (BHJ); poly(3-hexylthiophene) and [6,6]-phenylC71 butyric acid methyl ester (P3HT:PC71BM) used in our organic photovoltaics (OPVs) as shown in Figure 1. 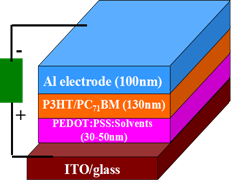