480
(Invited) Side Reactions and Cycling Efficiency with Silicon Electrode Surfaces

105-A (Phoenix Convention Center)
J. T. Vaughey, F. Dogan (Argonne National Laboratory), A. A. Hubaud (Argonne National Laboratory), and D. J. Schroeder (Northern Illinois University)
Energy storage materials – lithium-based portable energy storage technologies are an area of research that was born in the late 1960s / early 1970s, went global in the 1990s with portable consumer electronics, and is now being adapted to a variety of markets including electrification of vehicles, space flight, and grid storage.  While showing promise, these new applications may have different requirements (e.g. power, cost, volume) than ones optimized for consumer markets.

To increase energy density, many researchers are exploring ways to incorporate silicon into a battery.  Elemental silicon has many properties that make it a top candidate to replace graphitic carbon in next generation lithium-ion batteries.  It has (1) very high gravimetric capacity (~3600 mAh/g), (2) high volumetric capacity (~7400 mAh/L), and (3) low insertion cell voltage.  It also has many problems that must be overcome including (1) high volume expansion on lithiation, (2) an unstable SEI layer, and (3) instability of the fully charged anode to the electrolyte.  Although significant effort has been focused on silicon-based electrodes, e.g. understanding the role of morphology, particle size, or local structure – our work has been concentrated on electrode level interactions.  Using the knowledge gained from the materials level studies we are addressing what happens when the silicon is made into an electrode and exposed to the contents of an electrochemical cell [1-3].

Previous work by the Edstrom group [4-5] has shown that the normal passivation layer of silicon, namely silica, is in fact electrochemically active on the first charging cycle.  On first lithiation it reacts to form Li4SiO4.  This phase does not directly participate in the electrochemistry after this point, but does interact chemically with its environment to effect cycle efficiency and SEI stability [6].  In this talk we will discuss how, upon formation, it interacts with its environment and track these changes by FTIR, 29Si NMR, 7Li NMR, and PXRD with eventual formation of Li6Si2O7 and Li2SiO3. 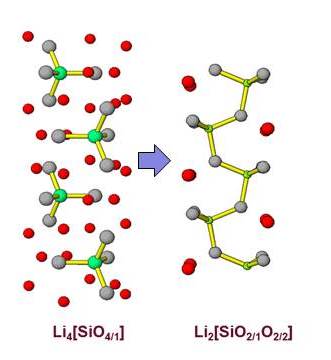