Borein B (Hyatt Regency)
Z. Feng (Case western reserve university), D. Friel (Case western reserve university), and D. Scherson (Case Western Reserve University)
Neural stimulation by metal electrodes such as Pt and its alloys and W has been used previously to evoke electrical activity in neurons1. This process involves passing short extracellular current pulses (ca. 100 µs) aimed at modifying the extracellular potential (Vext) and thereby altering the cell membrane potential. However, direct experimental measurements of Vext during such stimuli have been lacking. Theory suggests that Vext depends on both space and time. We have developed a method (ohmic microscopy) to measure Vext quantitatively with both spatial and temporal resolution, while passing current across noble metal electrodes during voltammetric scans.2-4 The present work extends application of this technique to current stimulus protocols commonly used in neural stimulation, including functional neural stimulation in clinical settings.

Thin wall glass capillaries were pulled to a diameter of ca. 10 µm for each barrel, and filled with an aqueous 0.1 M H2SO4 solution. Microreference (μ-ref) Ag/AgCl electrodes were made by inserting Ag wires coated with a layer of AgCl (0.125 mm in diameter) formed by dipping the wire  in a saturated KCl aqueous solution for at least 12 h. The μ-ref Ag/AgCl electrodes were mounted on individual holders connected in turn to individual micromanipulators. Pt disk (diameter 1.6mm) as working electrode, Pt wire as counter electrode, and Ag/AgCl(saturated) as reference electrode, 0.1M H2SO4 with their tips aligned along the normal to the center of the Pt disk (see Fig 1) at prescribed heights. A current pulse of a few mA was then applied to the Pt disk using a  function generator (Agilent 33220A) coupled to a potentiostat (Autolab, PGSTAT302N, Nova 1.10, Metrohm). The time response of the potential difference between the two μ-ref electrodes, denoted as, Δφsol, amplified 10 times (Ina141, Texas instrument), was recorded on an oscilloscope (Agilent DSO-X 2014A). A schematic diagram of the instrument setup is shown is Fig. 1.

For these experiments a current pulse of 5 mA, 100 μs in duration was applied across the Pt disk electrode (see red curve in Fig. 2), while recording the potential difference, Dϕ, across the two μ-ref Ag/AgCl electrodes placed at 1 mm, and 2mm normal to the disk along its center line (see blue curve, Fig. 2). As indicate therein, during the passage of current Dϕ was found to be ca. 62.5 mV. This value compares very well, i.e. slightly over 2%, with that predicted by Newman5, i.e. 61.2 mV. Excellent agreement was also found for other current values, duty cycles, and placement of the μ-ref Ag/AgCl electrodes. Efforts are underway to measure the response of dissociated neurons as a function of the placement of the electrodes and the stimulation parameters.

This work was supported by a Grant from NSF. 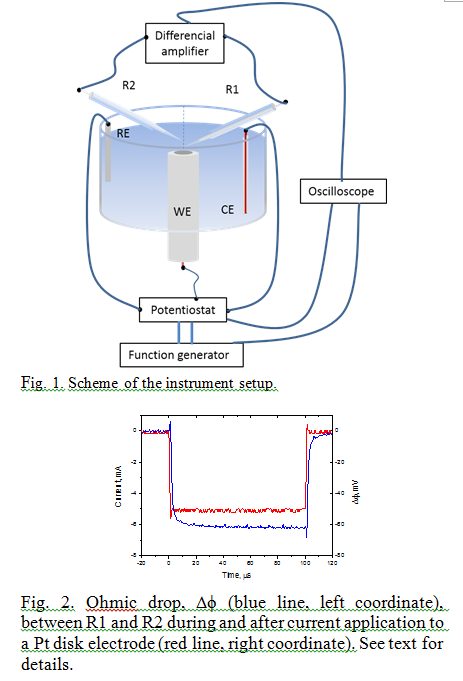