In 1997, we previously introduced the concept of a dye-sensitized solar cell that utilizes localized surface plasmons and is thus called a “plasmonic DSSC” [1]. In this DSSC, near-field light is used to enhance both the photoabsorption of Ru-dye and the generation of photoelectrons. By introducing AgNPs into a film of N3 dye, the absorbance of the dye can be increased by a factor of 149. Absorption enhancement has also been reported when the composite films are formed with AuNPs and black dye (BD). A key factor for enhancing the photoabsorption of a plasmonic DSSC with such a composite film is an overlap in the photoabsorption spectra between the metal nanoparticles and the dye. [2]

DSSC with AgNPs showed improved photoelectric conversion efficiency (Eff) of 2.5%, compared with about 1.5% for a DSSC without AgNPs [3]. In that study, to clarify the effect of AgNPs on the power generation characteristics, the TiO2 film of the DSSC was 2 μm thick, which is thinner than that for a typical DSSC (~10 μm).

An optimal thickness of the TiO2 film should exist for capturing sunlight while preventing back charge transfer. The dependence of TiO2 thickness on the performance of a DSSC with metal nanoparticles had been investigated. [4]

The level of electric field enhancement around AuNPs strongly depends on parameters such as the dielectric constant, distance from the surface of the particle, particle size, particle shape, and light wavelength, and thus depends on the combination of materials and their surface state. The length and conformation of the surface modulator is critical to determine the distance between the dyes, metal nanoparticles and TiO2. [5] Figure 1 shows the schematic of nanometer-distance control using a surface modulator in DSSC.

Attempting to highly control the distance, the hybridization of the peptide nucleic acide (PNA), which has similar structure to deoxyribonucleic acid (DNA), was used to improve the efficiency of DSSC. The Eff of DSSC was enhanced from 3.1% to 4.0% by the incertion of Ag NP with PNA bonded with TiO2. [6]

Applications of localized surface plasmon to next generation of solar cells

A part of this work was supported by the MEXT, FUTURE－PV Innovation Project. 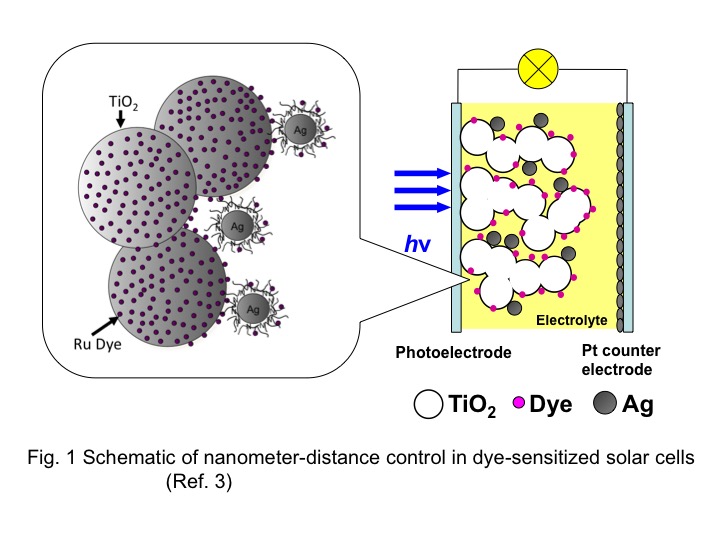