West Hall 1 (Phoenix Convention Center)
T. M. Braun (University of Washington) and D. T. Schwartz (University of Washington)
The Scanning Bipolar Cell (SBC) is a novel system using bipolar electrochemistry for micro-scale patterning without needing to connect the power supply to the substrate. Bipolar electrochemistry, defined as spatially segregated, equal and opposite reduction and oxidation on an electrically-floating conductor, has been understood for several decades but has recently seen a renaissance for many new electrochemical applications (1). The main driving force for bipolar electrochemistry is the ohmic potential drop through the electrolyte solution during the passage of current in an electrochemical cell.

The scanning bipolar cell was modified from an electrodeposition tool we call “Electrochemical Printing” (EcP). EcP jets electrolyte through a microcapillary nozzle with an upstream anode onto a conductive substrate that is cathodically polarized using an electrical connection. In this system, the ohmic potential drop beneath the microcapillary wall is designed to be large compared to charge transfer overpotential (small Wagner number), creating a localized current on the macroscopically polarized substrate. The large ohmic potentials typical of EcP make this system ideal for bipolar electrochemical applications and is easily modified when, instead of using the substrate as a cathode, it is allowed to float, and a new “feeder” cathode is placed distant from the microjet (Figure 1a attached) (2). In this configuration localized and controllable electrodeposition occurs on the macroscopic conductive substrate without direct electrical contact.

The concept for the scanning bipolar cell was first validated experimentally and computationally using the reversible copper redox couple, where copper deposits were patterned on a sacrificial copper substrate while copper in the far-field oxidized (2). The equal and opposite nature of bipolar electrochemistry provided a restructuring of the copper substrate, where the amount of material etched in the far-field was also locally deposited beneath the nozzle. Secondary current distribution computations evaluated the coupling between the ohmic and charge transfer resistances and determined relative current pathways through the system.

We have further generalized the design guidelines for operating the SBC to include a wide range of electrodepositable materials such as nickel, gold, and silver. The design guidelines for the SBC depend on the nobility and electrochemical reversibility of the material. Tailoring the far-field electrochemical reaction to that of the local reduction is also essential for successful bipolar electrodeposition.

Nickel is ideal for patterning with the SBC because it behaves irreversibly by forming a passivating oxide film, protecting the deposit from subsequent electrochemical oxidation. For reversible materials, such as copper, any previously patterned material can be electrochemically oxidized during subsequent deposition. This creates an added challenge for electrolyte design in order to create systems where the undesired copper oxidation is secondary to the far-field oxidation chemistry. To overcome this challenge we design pseudo-stable baths, where the equilibrium potential of the reducing agent (ascorbic acid) is slightly lower than that of the material being deposited. Figure 1b shows an optical micrograph of copper patterned on a gold substrate with ascorbic acid providing the bipolar oxidation in the far-field. Essentially, this is an electroless deposition bath that does not function well because of the low thermodynamic driving force. Nonetheless, the ascorbic acid oxidation is thermodynamically preferential to copper etching, so there is a window for the desired chemistry (ascorbic acid oxidation) to occur without the undesired chemistry (copper oxidation) occurring. This window also determines how fast we can drive the electrochemical reactions. Figure 1c shows an optical micrograph where the applied current is 10x larger than in 1b for the same electrolyte formulation, providing enough substrate polarization to do both undesired copper etching and ascorbic acid oxidation.

Scaling relationships for the SBC have been studied via simulations, and scale-down limitations center around nozzle fabrication and motion control. However, the SBC functions similarly to scanning ion conductance microscopy (SICM), which has pipette dimensions and motion-control with nanometer resolutions. We are confident that electrolyte design characteristics at the micron-scale can be applied to sub-micron systems with smaller resolution and control (3). 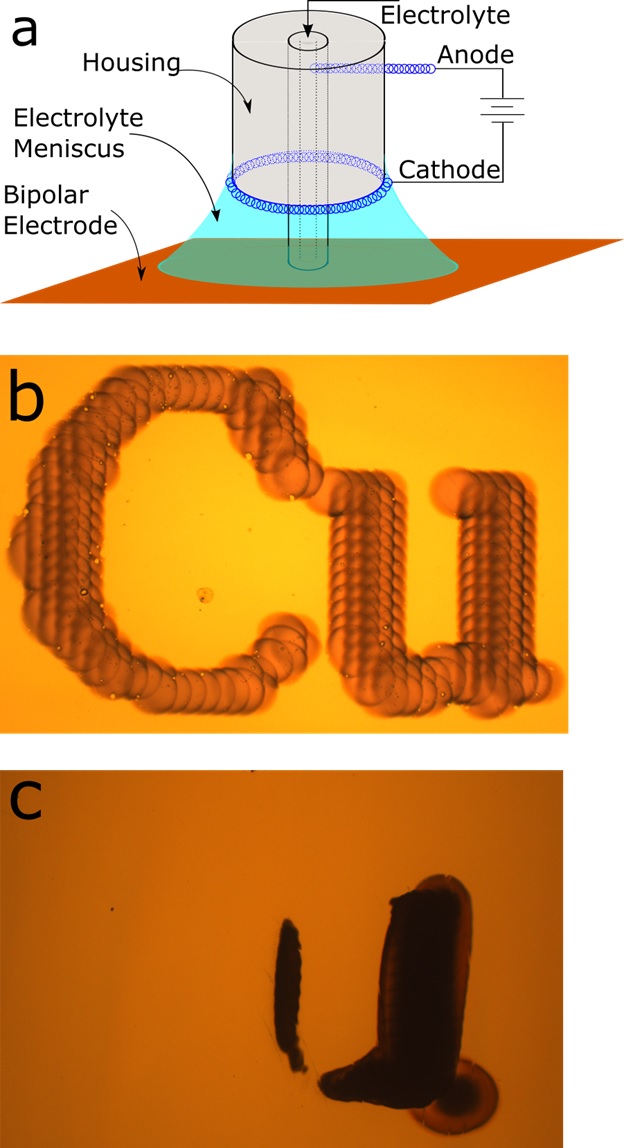