The rich variety of intermolecular interactions present in ionic liquids (ILs) often results in unique molecular architectures near surfaces and in bulk phases. These structures have dimensions from nano- to micrometer scales and have significant impacts on electrochemical and other behaviors. This talk presents spectroscopic, thermal, and electrochemical data to characterize IL structures and their interactions with surfaces. We discuss 1) spectroscopic measurements that characterize extended IL interfaces that form slowly but at impressive length scales, 2) electrochemical measurements of the IL electrical double layer (EDL) capacitance that show IL behaviors at electrodes are significantly different than classical dilute electrolytes, and 3) hysteresis effects seen across IL systems and how they might be explained by strong intermolecular interactions that lead to slow or frustrated dynamics. Our measurements show that most IL structures are insensitive to substrate surface chemistry or small amounts of absorbed water. This indicates that the liquid-liquid interactions are central to understanding IL system behaviors. Results are compared to existing theoretical models to advance a working picture of the IL interface and EDL, and to consider if, IL meso-scale structures might allow creation of new 3-D material architectures.

IL interfaces have proven challenging to study. Even advanced techniques such as sum frequency vibrational spectroscopy are challenged to access the buried IL interface (i.e. at electrodes fully immersed in solution with many microns of bulk material in the optical path length). This is due to complications of attenuation in the bulk material, as well as in SFG signal phase differences of resonant and non-resonant contributions, especially in media as spectrally dense as ILs.8,29Our group’s expertise in innovative sampling geometries such as dynamic wetting allows more direct access to the solid-liquid interface. The dynamic wetting technique creates thin (monolayer to several micron thick) fluid films amenable to direct spectroscopic probing.

Earlier publications from our group provide evidence of a major reorganization of IL molecules up to several microns away from a metallic surface. Specifically, IRRAS absorption profiles for 1-butyl-MIM TFSI films supported on a silver surfaces shows four vibrational bands, (1069 cm-1, 1149 cm-1, 1244 cm-1, and 1366 cm-1) clearly alter their lineshapes distinctly from the other vibrational modes in the spectrum. Each of these four modes is associated with a distinct vibration of the TFSI anion, and by recognizing that our IRRAS measurements probe only molecular vibrations with a component of their dipole moment perpendicular to the surface, the complete loss of absorption intensity from these four peaks suggests a reorientation of the TFSI anion that places its planar axis parallel to the metallic surface throughout the entire thickness (up to 2 μm) of the IL film. Ongoing work shows this reorganization to be general across several classes of ILs, which will have major implications for the electric double layer structure and transport of redox active species to and from electrode surfaces. However, the driving force for this process remains unknown.

Current spectroscopic techniques in our laboratory (i.e. polarization modulation infrared reflection absorption spectroscopy, see detailed list below) can selectively exclude bulk material beyond 1-4 μm from the interface from measurements, but in many instances the true interfacial layer has dimensions on the order of single nanometers. vSFG overcomes the limitations of linear techniques due to its inherent ability to probe only noncentrosymmetric species, such as liquids near a solid electrode or vapor phase interface. The SFG technique is desirable in that it allows direct access to probe matter exclusively within the interfacial volume of a chemical system. This allows us to more clearly monitor the initial steps IL molecular orientation, and to determine if it is originating at the metal surface or elsewhere in the fluid volume. 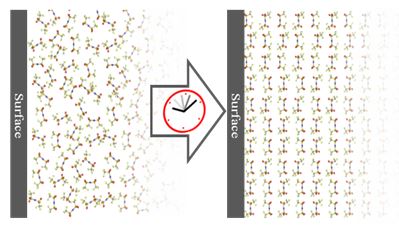