National Harbor 5 (Gaylord National Resort and Convention Center)
R. Srinivasan (Indian Institute of Technology, Madras) and R. Pachimatla (Indian Institute of Technology Madras)
Electrochemical impedance spectroscopy (EIS) is a versatile technique that is commonly used to characterize electrochemical systems [1]. In EIS conducted in pseudo-potentiostatic mode, sinusoidal potential perturbations are applied and the magnitude and phase of the resulting current perturbations are used to calculate impedance as a function of frequency. Typically small amplitude perturbations are employed and the response is analyzed assuming that the system behavior is linear and that higher harmonics are not present in the response. Most of the commercial equipment can measure the response at fundamental frequency but higher harmonics are usually discarded. If large amplitude perturbations are employed, the resulting current will have higher harmonic components, which, if recorded, can provide more information about the system examined [2].

In this work, we report measurement of nonlinear electrochemical impedance spectroscopic (NLEIS) response of titanium dissolution in HF. A potentiostat (EC301), Lockin amplifier (SR830) and a FFT analyzer (SR780) from Stanford Research System were combined and a software was written to seamlessly acquire NLEIS data. The applied perturbation frequency was varied from 100 kHz to 125 mHz and the amplitude was varied from 20 mV to 100 mV. The response current (both magnitude and phase) at fundamental and higher harmonics (up to 3rdharmonic) was measured using Lockin amplifier and FFT anlayzer. In order to measure the phase and magnitude accurately, the frequencies and span were chosen such that the fundamental and harmonics fall exactly in the measurement bins. No windowing was performed during FFT signal processing. The results are presented in Fig. 1. Open symbols are the results from Lockin amplifier while the filled symbols are results from FFT analyzer. At 20 mV perturbation amplitude, second harmonic was low but measurable, but the third harmonic was below detection limit. At 100 mV perturbation, all three harmonics could be measured. The results of Lockin amplifier and FFT analyzer matched well.

Ti dissolution in HF has been studied earlier using potentiodynamic polarization and EIS [3,4]. A four step mechanism with two adsorbed intermediates was proposed to explain the observed results. NLEIS measurements were performed on Ti dissolving in HF and the experimental results are presented in Fig. 1 as magnitude and phase of current response as a function of frequency. The experimental results were compared with the reaction mechanism model predictions. 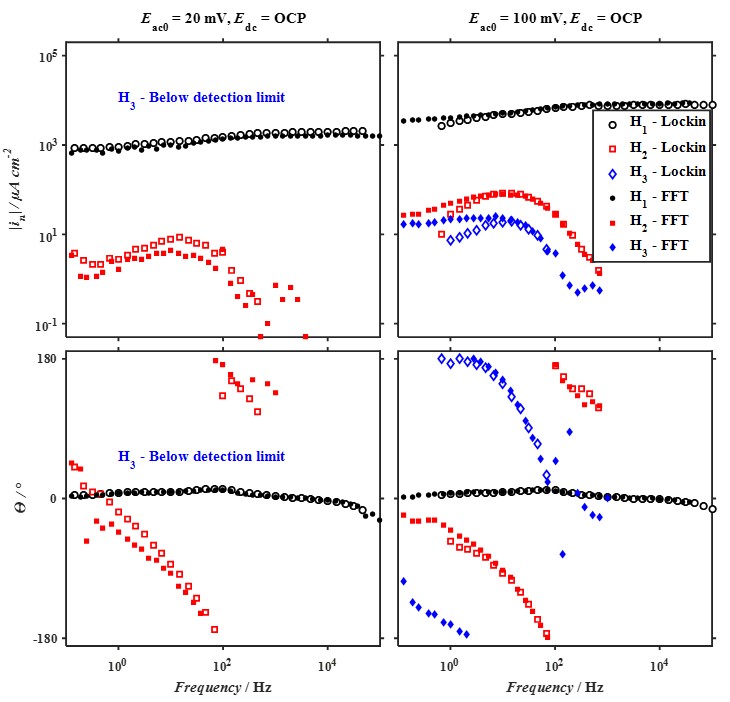