Alkaline water electrolysis (AWE) produces hydrogen without any carbon dioxide emission with renewable electric power supply. Anode of AWE is usually used Ni based material which is stable under steady electrolysis. Although fluctuating electricity from renewable energy enhances deterioration of Ni anode, high temperature prepared (Li)NiO/Ni anode has high stability under fluctuated power supply1). LaNiO3 is known as high electric conductivity and activity of oxygen evolution reaction (OER) in alkaline electrolyte2), however durability of LaNiO3 has never investigated under potential cycling. In this study, we have investigated the OER activity and durability of a lanthanum nickel oxide coated on Ni (La-Ni-O/Ni) using various precursors under potential cycling.

Figure 1 shows dependence of the Rf as a function of the potential cycle number. The Rfs were much larger than expected from the resistivity La-Ni-Os and thickness of the oxide with the SEM images, therefore the Rfs were affected by formation of NiO, which was confirmed with XRD. The Rf of La/Ni_1.0 was much smaller than others, which were baked at higher temperature than La/Ni_1.0. These values were almost the same during potential cycling. Therefore, the Rfs would be able to reduce by improvement of preparation procedure. 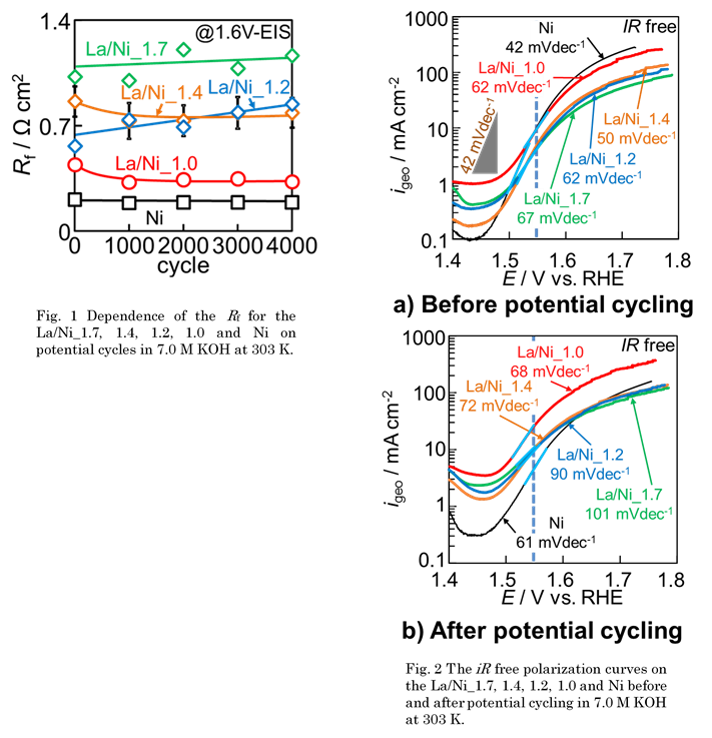