National Harbor 8 (Gaylord National Resort and Convention Center)
S. Chatterjee, Y. Li, and J. D. Snyder (Drexel University)
The electrochemical CO2 reduction reaction (CO2RR) shows promise for both anthropogenic CO2 remediation and renewable energy conversion and storage. The complex mechanism by which reduced products are formed, results in a high degree of variability in product formation, causing low faradaic efficiencies (FE) for specific desirable products1. Significant effort has focused on the production of CO, being only a 2-electron process, as a targeted reduced product2. However, CO is only useful as a fuel if combined with H2 to make syngas. Formate/formic acid is another 2-electron reduced product; however, it has a greater utility as both a chemical precursor and electrochemical fuel. Pd, which has been traditionally classified as a CO producing metal at potentials below -0.6 V RHE3, has been recently shown to evolve formate/formic acid with near 100 % faradaic efficiency at overpotentials below 200 mV4. At these operational potentials, however, any CO produced, even at rates too low to measure, will act to poison the surface over time, eventually resulting in the complete deactivation of the catalyst5.

In this work we present the development of free-standing nanoporous Pd (NPPD) alloy electrocatalysts, fabricated through electrochemical dealloying6 of binary Pd alloys, for the CO2RR. NPPD catalytic electrodes exhibit both a high FE for formate production at low overpotential and a superior tolerance to CO poisoning, facilitating extended electrolysis. The dealloying process gives rise to a core-shell alloy-Pd nanostructure where the presence of the alloying component under the Pd-skin alters the adsorption strength of CO. We find deactivation time to trend with the composition dependent CO adsorption strength for the core-shell nanoporous structures while the formate FE remains unaffected. Making direct comparisons to Pd/C, we find the NPPD electrodes to have higher sustained CO2RR currents with superior CO poisoning tolerance and the negation of the need for ionomers such as Nafion.

We have tested the CO2RR activity, selectivity, and degree of deactivation as a function of time during extended electrolysis for NPPD structure formed through the dealloying of Pd15X85 alloys (X = Ag, Cu, Ni, Co). Each NPPD electrode has a residual X composition of ~ 30 at.% and pore sizes ranging from 5 to 10 nm, see Figure 1(a). Comparing NPPD to a more traditional catalyst architecture, Pd/C (Figure 1(b)), we observe significantly higher geometric current densities for the NPPDs in addition to a dramatic increase in deactivation time, Figure 1(c), all while attaining formate FEs of more than 90% between 0 to -0.2 V RHE. Additionally we find a trend in a tolerance to CO poisoning, as quantified by the time to deactivation during constant potential electrolysis, with the identity of the alloying component, X. It is found that the deactivation time increases in the order X = Ag < Cu < Ni < Co. We propose that this is due to the weakening of the CO adsorption strength on the Pd shell due to electronic interaction with the underlying X alloying component. This fits with the trend calculated for CO adsorption free energy on Pd3X alloys7.

Here for the first time we present evidence that selectivity of the CO2RR for a reduced carbon product can be controlled independently of CO adsorption strength, suggesting that there is no adsorption free energy scaling between adsorbed formate and CO. By varying the alloy composition for NPPD we are able to mitigate CO poisoning on a strong CO binding catalyst and outperform traditional Pd/C catalysts in terms of deactivation times, activity, and stability. 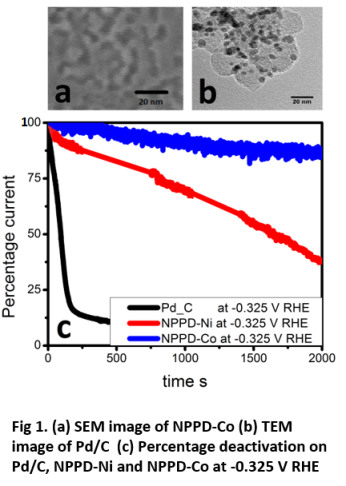