National Harbor 5 (Gaylord National Resort and Convention Center)
N. Ueno, Y. Morisawa, and T. Wakabayashi (Kindai University)
Polymer Electrolyte Composites composed of Li+ (Li+ PECs) have attracted much attention because they are used in Li+ batteries and solar cells as substitutions of organic electrolytes. Li+ PECs have suitable features, such as incombustibility, non-volatility, and broad potential window, for safe and stable electrolytes of batteries. However, Electric conductivity (s) of Li+ PECs has still been low because of their high viscosity. To improve the performance of Li+ PECs, many studies were carried out by considering with variation and concentration of anions and polymer additive. These studies used the vibrational spectroscopy, NMR and XRD to elucidate coordination structures in Li+ PECs. In the present study, we suggest the novel spectral analysis for strength of coordination bonds by attenuated total reflectance spectroscopy in Far-Ultraviolet region (ATR-FUV).

Investigations for electronic states of polymers in the FUV region have still been rare because it is difficult to observe a variety of samples systematically. Recently, ATR-FUV was developed, and this technique is suitable for observing FUV spectra of liquids and solids easily and feasibly. Using the ATR-FUV systematic measurement of FUV spectra of PECs composed of Li electrolytes and poly (ethylene glycol) (PEG) for dependence on variation of anions and their concentration were carried out and these spectra were compared with molecular orbital calculations. We found the FUV spectra reflect strength of the coordination bond in Li+ PECs.

The electronic transitions of PEG have already been investigated by considering its molecular-weight dependences with ATR-FUV spectra and quantum chemical calculations. It has 3 Rydberg (Ryd.) transitions in the region of 145-300 nm. Observed bands peaking at 155, 161 and 175 nm are assigned to n (OH)-3p Ryd., n (CH2OCH2)-3p Ryd., and n (CH2OCH2)-3s Ryd. ATR-FUV spectra of Li+/PEG composites with some kinds of anions were shown in Figure 1 (a). For all the Li+/PEG composites, ATR-absorbance decreases in the region of 140-200 nm where PEG has absorption bands. The band at 175 nm in PEG shift to shorter wavelength to 170 nm in the Li+/PEG composites, while the other bands did not show the peak shifts. The blue shift in 170 nm band caused forming the coordinated bond between Li and oxygen atom at the ether of PEG.

To elucidate origin of these changes, we performed spectral simulation with 2 coordinate structures, such as a crown ether like structure (CE-like) and intercalation between 2 PEG (intercalation). They are well known structure about Li+/PEG composites and suggested by vibrational spectroscopy. Both the results of quantum calculations at the level RCAM-B3LYP-TDFT 6-311++G (2d, p) indicated the blue shift in longer wavelength band as shown in Figure 2. The simulation spectrum for CE-like structure shows a blue shift that for the intercalation. The concentration dependence of the blue shift can be explained by the conversion structure from intercalation to CE-like one with increase the LiNO3 concentration. 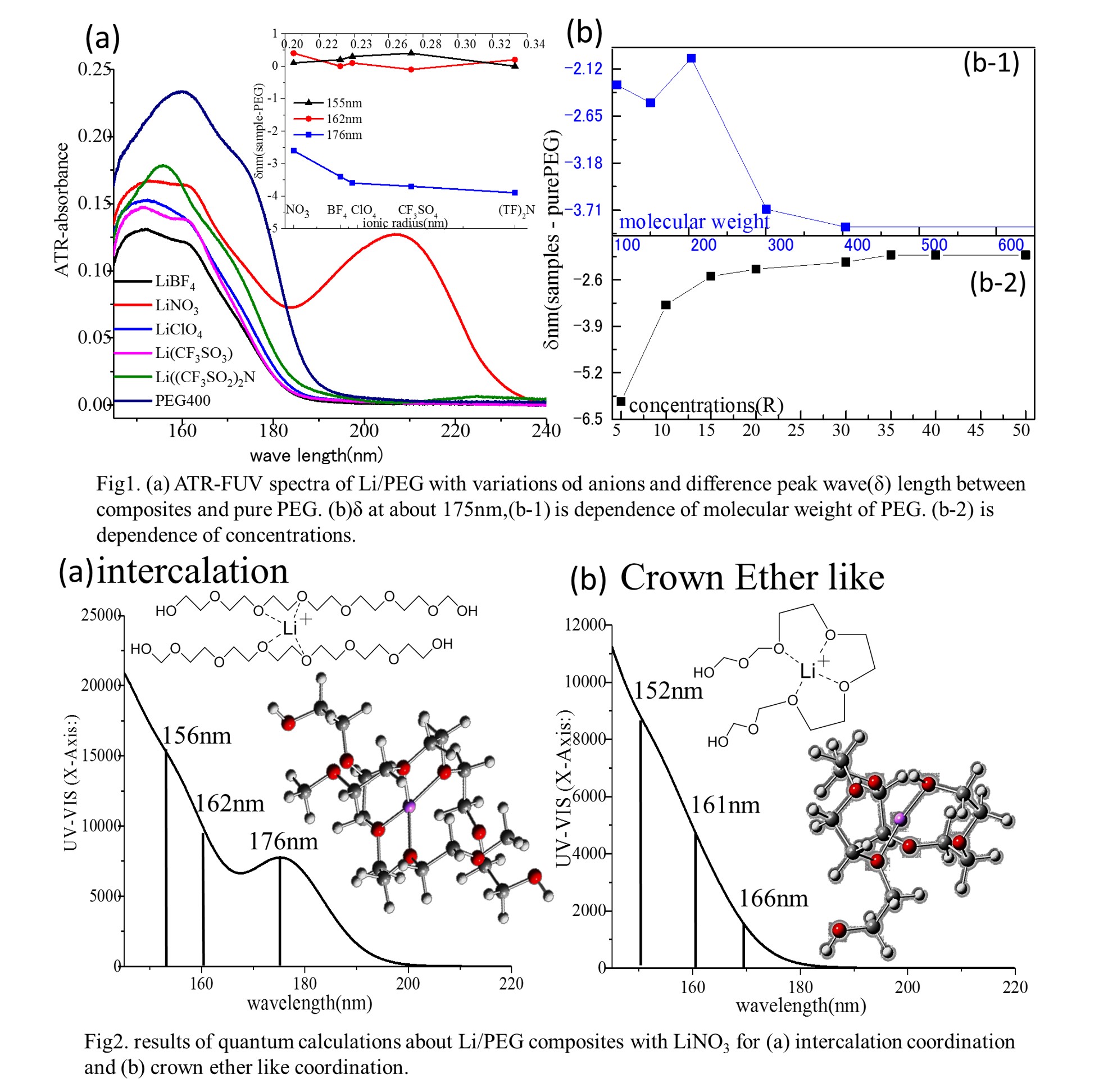