National Harbor 3 (Gaylord National Resort and Convention Center)
P. Satjaritanun, S. Shimpalee, J. W. Weidner (University of South Carolina), S. Hirano, Z. Lu (Ford Motor Company), A. Shum, I. V. Zenyuk (Tufts University), S. Ogawa, and S. Litster (Carnegie Mellon University)
The purpose of this work is to use a numerical simulation applying the Lattice Boltzmann Method (LBM) [1-2] technique to understand the two-phase transport of liquid water and air inside the gas diffusion layers (GDLs) used in polymer electrolyte membrane fuel cells (PEMFC). The liquid water breakthrough dynamics described by the capillary pressure across the GDLs with and without a microporous layer (MPL) are the major focus in this work. The model geometries of GDLs and MPLs used in this study were obtained by three dimensional reconstructed micro-structure from both Nano and Micro X-ray computed tomography (CT). The overall predictions of water breakthrough pressure agree with the data observed in the experiment. They also reveal that the breakthrough pressure and liquid water evolution inside the GDL samples are different when the wetting properties of GDL and/or MPL are changed. Figure 1 gives an example of model geometries for the simulation. It consists of both GDL and MPL those were taken from Nano X-ray CT. This also includes a crack that was observed from the image. Figure 2 shows an example of the predictions of water evolution inside the GDL and MPL. When the liquid water was pushed from MPL to GDL, liquid water spread all over the MPL before it moves toward the GDL. This is because the pressure required to push the liquid water thru the MPL structure or the crack in MPL is higher than the pressure used for liquid water spreads on the top of MPL [3]. 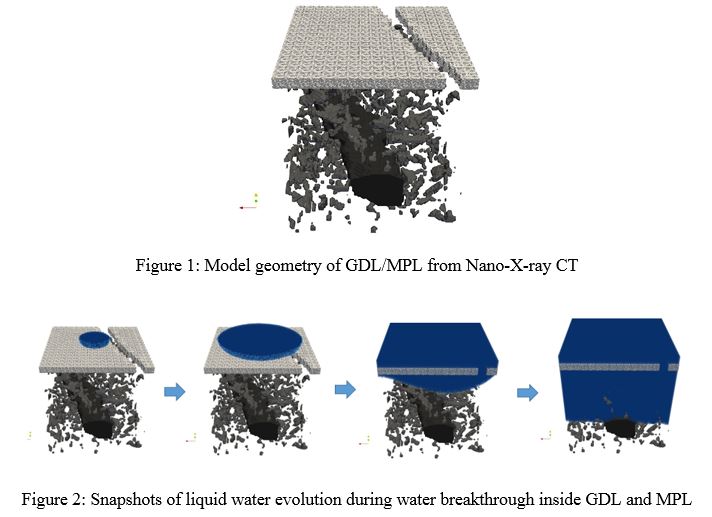