National Harbor 4 (Gaylord National Resort and Convention Center)
V. Tripkovic, H. A. Hansen, J. M. Garcia Lastra, and T. Vegge (Technical University of Denmark)
The oxygen evolution reaction (OER) is a bottleneck in direct solar and electrocatalytic water splitting cells, and rechargeable aqueous metal-air batteries. Improving the cost-efficiency of these devices requires development of efficient and cheap oxygen evolving catalysts. A good catalyst material should fulfil several important criteria: the composition and structure should be stable at conditions of interest, it should be able to conduct electrons from the active site, and it should be sufficiently active to catalyze water oxidation to oxygen. Furthermore, the catalyst should be cheap and non-toxic.

We explore two different oxide classes: pristine and doped perovskite oxides (ABO3, where A is the alkaline earth or lanthanide metal and B the 1st row transition metal) and several MnO2polymorphs. Stability and the electronic conductivity of doped materials are assessed and compared to pristine catalysts by computing formation energies and analyzing the electronic structure of bulk crystals, respectively. After selecting stable dopants, we calculate the relevant surface termination and deduce the reaction overpotential from the energetically most favorable reaction mechanism.

For the perovskite oxides, we identify Fe4+, Co3+(IS), Ni3+ and Mn3+/Mn4+ pairs as electronically conductive species and distinguish among three different electron conduction types: intrinsic conductance (Fe4+ and Ni3+), electron polaron hoping along the Metal-Oxygen-Metal chains (Mn3+/Mn4+) and conduction via oxygen holes in the valence band. Although, the intrinsic stabilities of La perovskites are rather low, they are likely to be the most stable catalysts in open systems because they do not form carbonates. From a combinatorial analysis on La perovskites, we identify the most promising oxygen evolving catalysts.

We find that the OER activity of MnO2 polymorphs reduces in the αMnO2 > βMnO2 > γMnO2 sequence. We pinpoint αMnO2 as the most active catalyst and subsequently investigate whether its performance can be furthered by doping. The electronic conductance is greatly improved by creating Mn3+ sites, i.e. Mn3+/Mn4+ pairs, which is accomplished by intercalating electrolyte ions (e.g. Na+ or K+) inside αMnO2 voids. From catalytic analysis, we identify Pd and Co doped αMnO2 as the most active catalyst for oxygen evolution.

This work was supported by the Horizon 2020 framework, grant number 646186 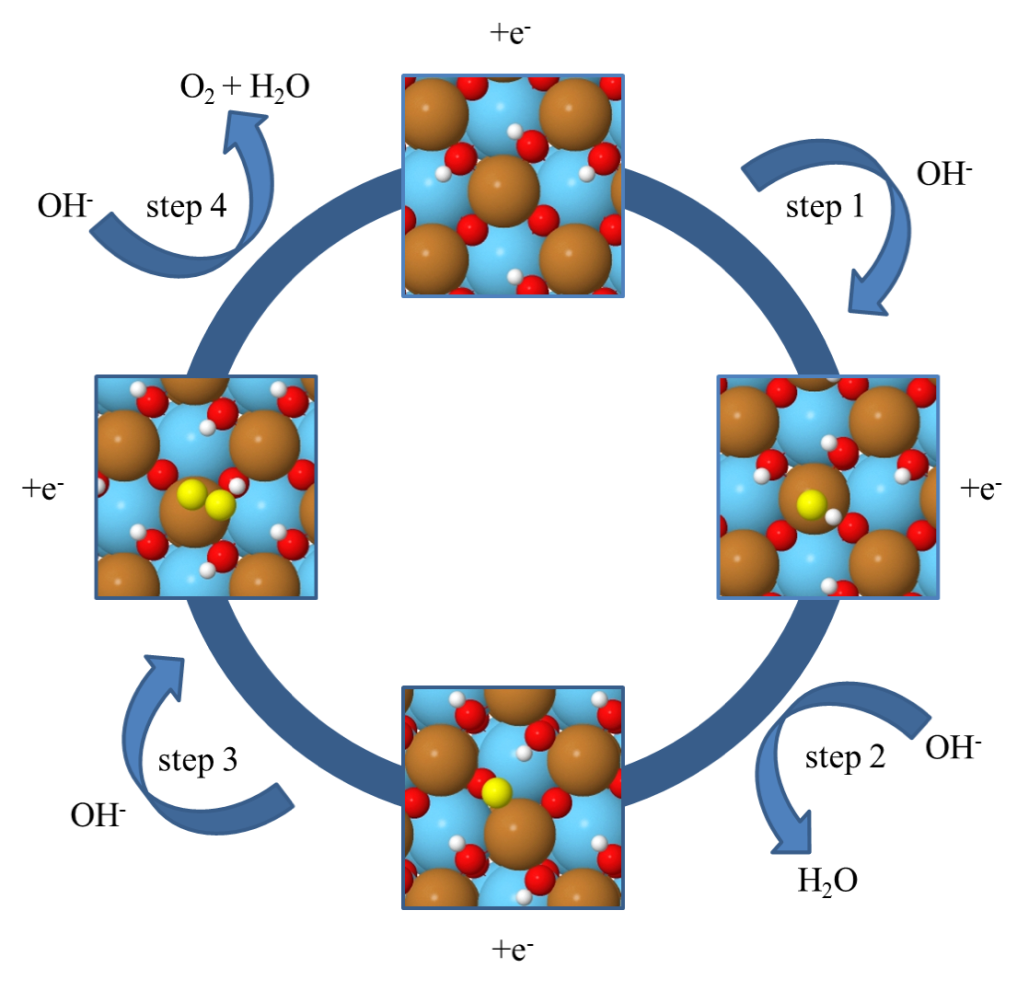