Prince George's Exhibit Hall D/E (Gaylord National Resort and Convention Center)
P. A. Chen, J. W. Lee, M. H. Chiang, and W. C. Hsu (National Cheng Kung University)
This work investigates the design issues and insights of the graphene interconnects with the defects stemming from oxygen plasma etching. Zigzag graphene nanoribbons (ZGNRs) with an odd number of zigzag chains show a unique linear I-V characteristic, suitable for interconnect application. However, the common etching method, oxygen plasma, for ZGNRs could introduce defects, leading to carrier transport degradation. This work is aimed to understand the issue and seek for a solution for the practical use of ZGNRs.

The completed structure for transport calculation is composed of the central region, and left/right electrode, as shown in Fig. 1 where, from top to bottom, the three structures represent for edge-roughness, oxygen-on-edge, and sp3-type oxygen defects, respectively. The structures are first optimized until the atomic force falls below 0.01 eV/Å. After the optimization processes, we apply density functional theory (DFT) and non-equilibrium Green’s function (NEGF) to evaluate materials and transport properties. In NEGF calculation, the transmission coefficients are obtained from the retarded Green’s function, and then the I-V values can be obtained through the integration of transmission coefficients based on the electrochemical potentials, electron temperatures, and applied voltages of the left and right electrodes.

The I-V characteristics of the edge-roughness and oxygen-on-edge structures are shown in Fig. 2. Compared to ideal N=3 case (atom chains), both of the two cases lose their linear I-V characteristics, and their characteristics are almost identical. An extra unit cell on edge gives the similar effect as the oxygen atom does. Transmission eigenstates, pathways and the device density of states (DDOS) are analyzed for understanding the physical mechanism. In Fig. 3, there is nearly zero state around the extra unit cell and oxygen, so carriers have no state to transport through, like being blocked. As indicated in Fig. 4, the carbon atom bonded to the oxygen has almost no DDOS existing at the Fermi level. By contrast, the ideal case has a large peak at Fermi level for the carbon atom at the same position. Next, the I-V characteristic of the sp3-type oxygen defect is shown in Fig. 5. After optimization, the oxygen is located between the two carbons of the ZGNR and forms the sp3 bonds. This sp3-type oxygen defect breaks the pi-bond system of graphene, and makes the smooth surface wrinkled and uplifted. This deformation significantly degrades the transport properties of the ZGNR, and leads to severe I-V degradation.

After evaluating how these defects impact the transport properties, the practical design methodology is further provided. In fact, the I-V characteristic of the ideal odd-row ZGNR is not dependent on its width. Nonetheless, it does change with width for non-ideal cases. Fig. 6 shows that as the width changes from N=3 to 9, the linearity of I-V characteristics recovers. However, when the width exceeds N=9, the I-V characteristics lose the linearity again. We suggest the choice of width no more than N=9 for better linearity and limited interconnect area. For the sp3-type oxygen defect, because the edge portion occupies a big ratio of ZGNR transport, the near-middle case shows better result than the near-edge case with an incredible linearity and current value, which is very close to the ideal one, as shown in Fig. 7. It is essential for the ribbon edge to be treated with some optimized process to clean up the oxygen atoms.

An interesting transport result is found when the multiple defects exist on the opposite edges. In Fig. 8, compared to the one-oxygen case, all multiple-defect cases show the recovery of linearity. Two-unit-cell and two-oxygen cases show similar I-V characteristics again. Considering the unique similarity between the extra unit cell and oxygen, this multiple-defect recovery mechanism can be used to design an oxygen-tolerance ZGNR interconnect. The odd-row ZGNR has an asymmetry structure; an extra unit cell can be just located at the symmetry site of oxygen, as shown in Fig. 9. This structure has a dramatic I-V recovery and nice I-V linearity, being very close to the ideal case. The result proves that the extra-unit-cell design can help recover the degradation of I-V characteristic by oxygen atom adsorption on edge. 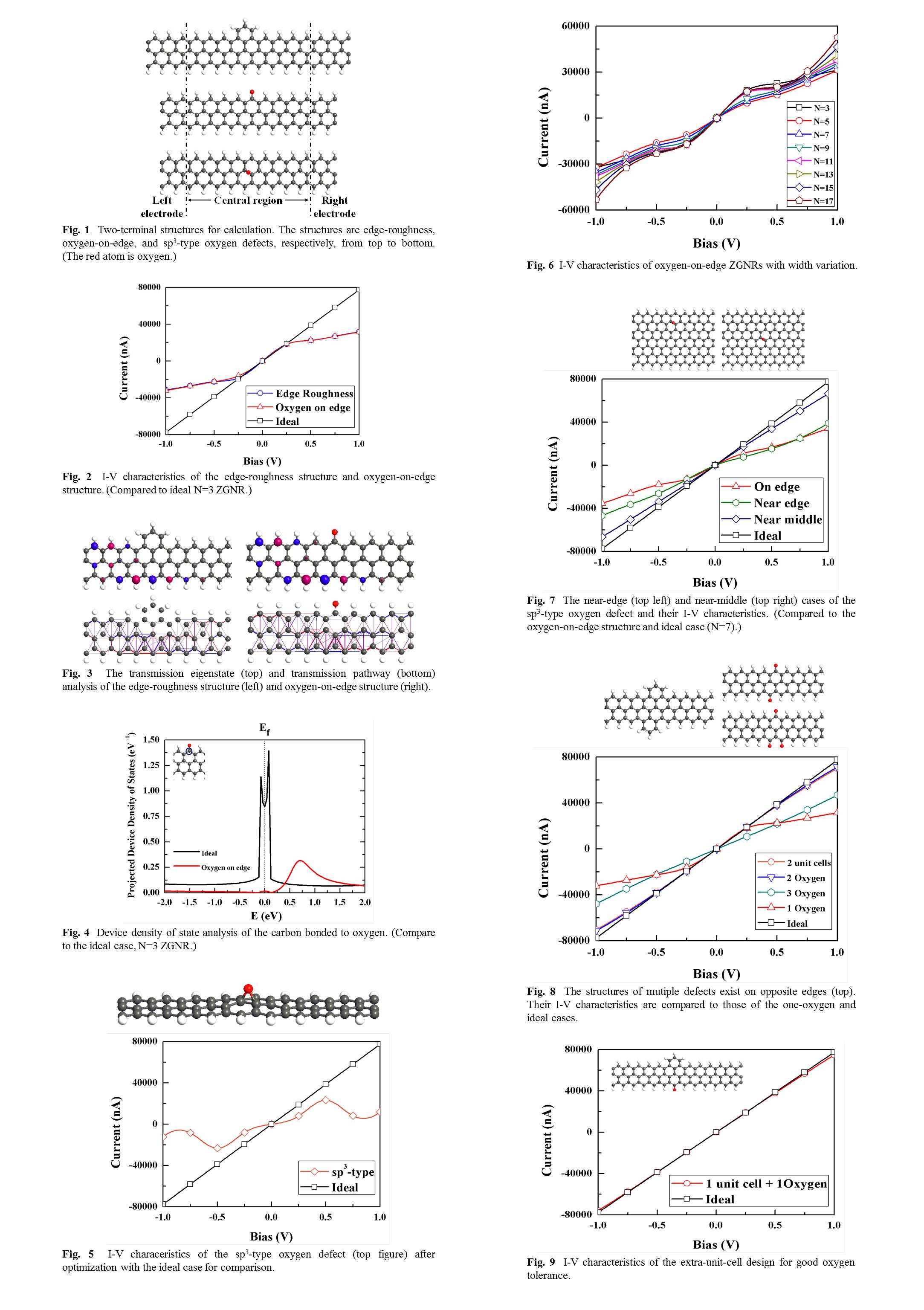