Cathodic protection (CP) controls the corrosion current of steel bars in concrete by polarizing the steel potential in the less noble direction. CP is accompanied by spin-off reactions that generate OH- ions (thereby increasing the pH) and decrease the chloride ion concentration near the steel surface. In addition, concrete is a solid-phase material with a small diffusion rate. Therefore, the Cl-/OH-molar concentration ratio remains low at the steel surface even when the CP expires after a sufficiently long time. A repeated intermittent-current CP is thought to control steel corrosion.

This study examines the preventive effect of intermittent-current CP against the corrosion of steel bars in concrete specimens.

The lean concrete contained a water-to-cement ratio of 70% and 15 kg/m3chloride ions. The high water-to-cement ratio and the chloride cause progressive corrosion, enabling short-term evaluation of corrosion prevention. The concrete specimens were cast as prisms with dimensions of 100 mm × 100 mm × 200 mm. A plain steel bar and an insoluble anode were placed in the concrete specimens.

The CP test evaluated two types of intermittent-current CP, a continuous current CP and a No CP specimen. To promote steel corrosion, the CP test was conducted at 40° C and 70% RH. From days 164–218, the environment was changed to 20° C and 70% RH. 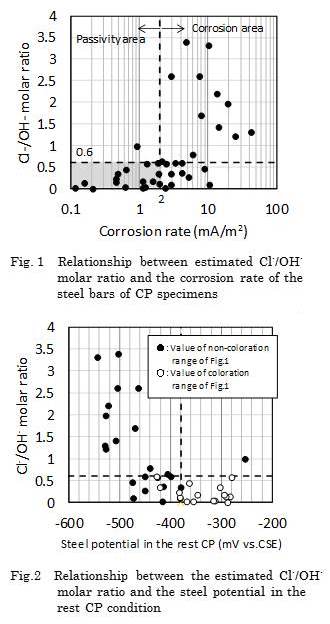