National Harbor 15 (Gaylord National Resort and Convention Center)
T. Jurzinsky, P. Kurzhals (Fraunhofer Institute for Chemical Technology ICT), K. Pinkwart, J. Tübke, and C. Cremers (Fraunhofer Institute for Chemical Technology (ICT))
The oxygen reduction reaction (ORR), which is the reaction taking place on the cathode in fuel cells and metal-air batteries, is in the focus of research since several decades due to its importance for the overall power source performance. Thereby it was found that each application features specific challenges. In this sense, the development of ORR catalysts designed especially for the various types of power sources currently under investigation plays a key role for future applications.

In direct methanol fuel cells (DMFCs), methanol is used as anodic fuel. A known potential issue of these fuel cells is the permeation of methanol from the anode to the cathode through the proton-exchange membrane (PEM). Such methanol permeation causes two reactions to compete at the cathodic catalytic surface for active catalyst sites: oxygen reduction reaction and methanol oxidation reaction. This leads to a mixed potential at the cathode and to a lowering of fuel cell performance by a lowered cell potential and a reduced availability of catalyst sites for the oxygen reduction reaction. The technical solution used in DMFC systems today is to carefully balance the drawn current against the methanol concentration and feed-rate on the anode side to keep methanol concentration at the membrane interface low. For small stacks thus issues related to methanol cross-over can be avoided. The required low fuel concentration at the cell entrance will, however, become more challenging to maintain, if the stacks are growing large to address further markets.

In recent years, materials science in fuel cell technology focussed on two different approaches to mitigate the problem of so called methanol cross-over in a more principle way. The first approach deals with the methanol cross-over by designing membrane materials which are proton-conductive but hinder the diffusion of methanol from the anode to the cathode. The second approach to overcome problematic methanol cross-over is to design oxygen reduction reaction catalysts, which are highly active for ORR but almost inactive for the parasitic methanol oxidation reaction in the presence of oxygen. Therefore, these catalysts are less prone to the deactivation of ORR catalysis by simultaneously engaged methanol oxidation reaction. Most research groups test their cathode catalysts by carrying out ORR experiments in rotating disc electrode measurements in presence of methanol. Even though these kind of measurements give a prediction on the catalysts ability to deal with the presence of methanol during ORR, these tests are not able to evaluate the reaction products from parasitic methanol oxidation reaction, which will be formed at the cathode and therefore will be found in the exhaust of the DMFC. Also, these experiments are carried out in an oxygen-enriched electrolyte (e.g. H2SO4 solution) and are therefore not a realistic scenario of a PEM-based fuel cell cathode.

In this study, we present a half-cell setup which we derived from our gas phase DEMS set-up published earlier (1) and which enables the testing of ORR catalysts under more realistic conditions. By coupling a half-cell with a mass spectrometer, it is possible to detect products from methanol oxidation reaction competing with oxygen reduction reaction. In this sense, in a first test commercially available Pt/C was tested as cathode catalyst in this setup to evaluate feasibility of the setup. In Figure 1 linear sweep voltammograms are shown which were conducted with the novel setup at Pt/C gas diffusion electrode with Nafion® ionomer binder exposed to synthetic air which was bubbled through either pure water or methanol/water solutions with the indicated methanol concentration upstream of the cell. In the upper graph, the influence of methanol on the faradaic current is shown. The lower graphs show the mass spectrometric signals of typical methanol oxidation products like carbon dioxide, formic acid or methyl formate in dependency of applied potential. Dependent from the methanol concentration, different products formed at the catalyst from methanol oxidation are observable at room temperature. Additional measurements at higher temperatures (~60 °C) and with cathode catalysts known to be less prone to deactivation by methanol cross-over will be shown at the conference. 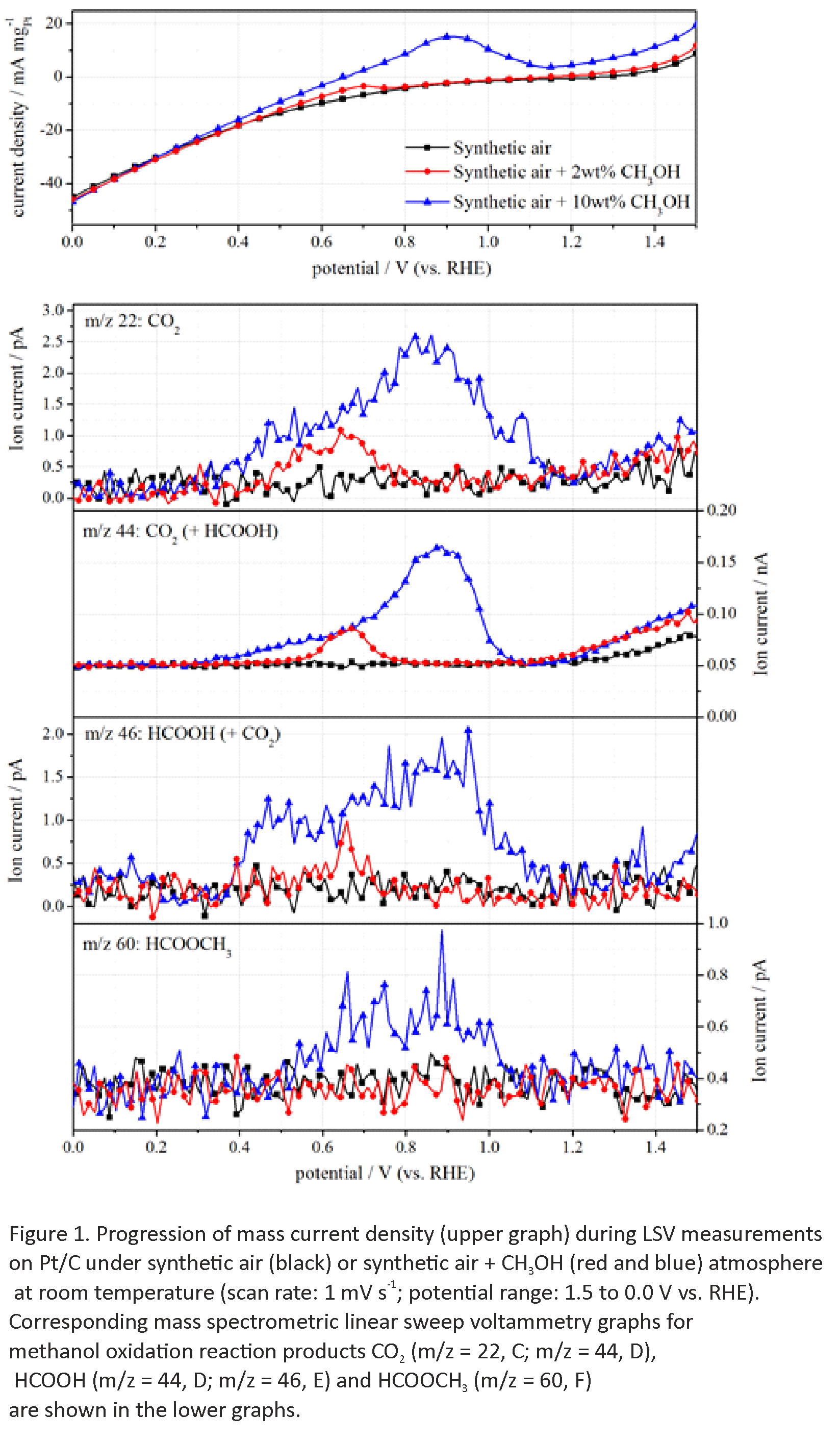