National Harbor 9 (Gaylord National Resort and Convention Center)
K. Hasegawa, C. Takazawa (Tokyo Institute of Technology), M. Fujita, S. Noda (Waseda University), and M. Ihara (Tokyo Institute of Technology)
The recent development in monocrystalline Si solar cell technology is significant both for reducing the cost and for developing the power generation efficiency. The reduction of Si thickness is one of the key to achieve the further cost reduction. Bottom up technics such as epitaxy and layer transfer process is promising approach to get less than 50 µm-thick Si thin film. Si layer is deposited epitaxially on a seed monocrystalline wafer with a thin sacrificial layer, and then an epitaxial thin film is detached from the seed layer (Fig. 1). This process on double layer porous Si (DLPS), a top low porosity seed layer and a bottom high porosity sacrificial layer, have been widely studied, but there are two challenging issues to be solved. One is the long process time of epitaxy by chemical vapor deposition and another is the quality of the epitaxial film. Rapid vapor deposition (RVD) have been realized to grow epitaxial Si layer at ~10 µm/min deposition rate by the evaporation of Si source with >2000 °C [1]. On the other hand, the crystallographic quality of epitaxial film will depend on the roughness of the seed layer because such roughness will make lattice mismatch during the crystal growth. The effect of the surface roughness is supposed to be larger when the film growth rate get bigger, so to control the roughness become more important to obtain the high quality Si thin film with high speed, low cost process such as RVD.

We have developed the zone-heating recrystallization (ZHR) method, the high-speed scanning lamp heating below the melting point of Si, for the selective heat treatment of the Si surface (Fig. 2) [2]. By applying ZHR to the epitaxy and layer transfer process on DLPS by RVD, we obtained the 9 µm-thick monocrystalline Si thin film with only 1-min epitaxy [3].

In this work, we controlled nanometer-size roughness of DLPS surface by ZHR and investigated the properties of Si thin film grown with RVD. To investigate the quality of thin film Si by both XRD and electron spin resonance (ESR), RVD were carried out with intrinsic Si wafer as Si source to avoid the signal of electron from the dopant. ~9 µm intrinsic Si thin films were grown and they could be easily detached by transferring to scotch tape. The Si films with different root mean square roughness (Rms), pore size and pore number density which were grown on DLPS with/without ZHR in several condition were picked up and analyzed.

DLPS were formed on p-type monocrystalline Si (100) wafer by two-step anodization. ZHR were carried out with different input power into bottom heater and scanning rate of top lamp heater, and DLPS with different Rms (0.23-0.39 nm) observed by AFM were obtained as described in the previous report [3]. In Si film grown by RVD on the DLPS by each ZHR condition, in-plane XRD Φ-scan of (022) diffraction showed clear four fold symmetry, which proves that the epitaxial monocrystalline film of Si(100) obtained regardless of ZHR conditions. The effect of the surface roughness of DLPS on the crystallographic quality of epitaxial Si films will be discussed.

In summary, the epitaxial monocrystalline film by RVD was obtained by the selective heat treatment of Si surface of DLPS by ZHR. The intrinsic monocrystalline film with 9 µm by RVD on DLPS could be easily detached from Si wafer to evaluate crystallographic quality by ESR. 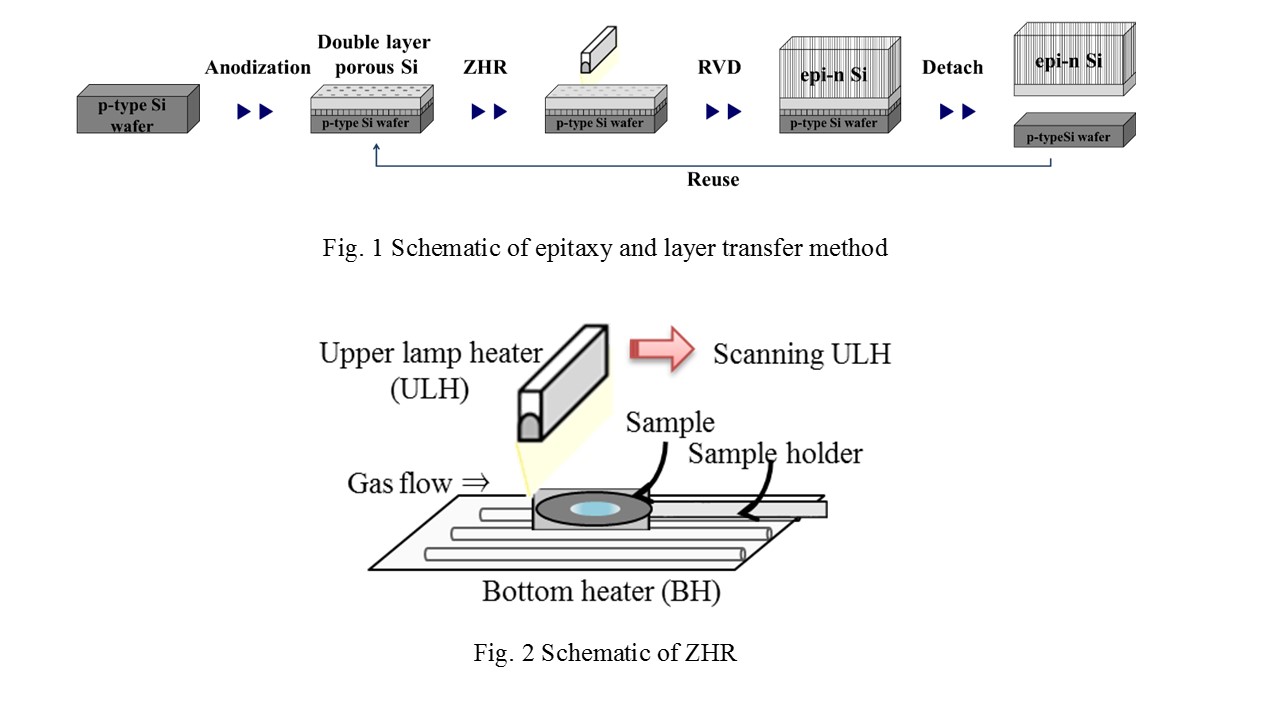