Prince George's Exhibit Hall D/E (Gaylord National Resort and Convention Center)
D. Mays (Private laboratory) and A. Hussam (George Mason University)
The focus of this methodology is to use high performance automated square-wave anodic stripping voltammetry (HPSWASV - A technique where the background is subtracted dynamically in a square wave format while anodic stripping voltammetry is being recorded with two current sampling on the pulse. We have built the potentiostat and wrote the code to perform this technique specifically suitable for arsenic measurement on a gold microwire electrode.) as the technique in a system that is field deployable with a 2-electrode cell (a working and a reference electrode). The counter electrode, often made of platinum and can be one of the most expensive components is not needed in this system given the small current generated during the electroanalytical process. This methodology is perfectly suitable with microelectrodes with low current demand. It is inexpensive, simple and easy to fabricate anywhere or produced commercially. The cells can last for hundreds of measurements with novel in-situ pulsed cleaning. The estimated total cost with dedicated potentiostat, cell, and laptop computer is approximately 1000 USD. This a one-time cost.

The specifics of the electrochemistry are as follows: using anodic stripping voltammetry with reagent grade hydrochloric Acid (HCl) and 100 s deposition time. This deposition time shows the best results without any data exclusion. The preconditioning procedure employed was cyclic voltammetric (CV) from 0.0 to 1.5 V at a scan rate of 100 mV/sec in 0.5 M H2SO4. Oxidation and reduction peak potentials were examined closely. In the analysis of 200+ CV runs, the average oxidation and reduction peak potentials were 1.284 ± 0.01 V and 0.849 ± 0.005 V respectively. These values are within 10 – 15% of those potentials cited in the literature. The calculated surface areas were 0.0607 ± 0.0054 cm2 and 0.0095 ± 0.0030 cm2 for oxidation and reduction respectively. The average oxidation surface area was larger than the reduction and might be explained by differing oxidation states of clusters of Au atoms on the surface not being reduced or not in close enough proximity to the surface for reduction. A solid gold wire electrode, which requires no separate gold deposition, is much more acceptable when in the field.

Results from my prototype systems measure between 10 -100 ppb As(III) with good repeatability. As(V) is measured by first scanning for As(V) which comes off at a higher potential than As(III) and then determining the concentration using the method of standard addition. The As(V) in the sample solution is then reduced to As(III) and the sample solution is scanned again for As(III) and a standard addition conducted. The difference between the two (2) unknown sample concentrations is the quantitation of As(V). 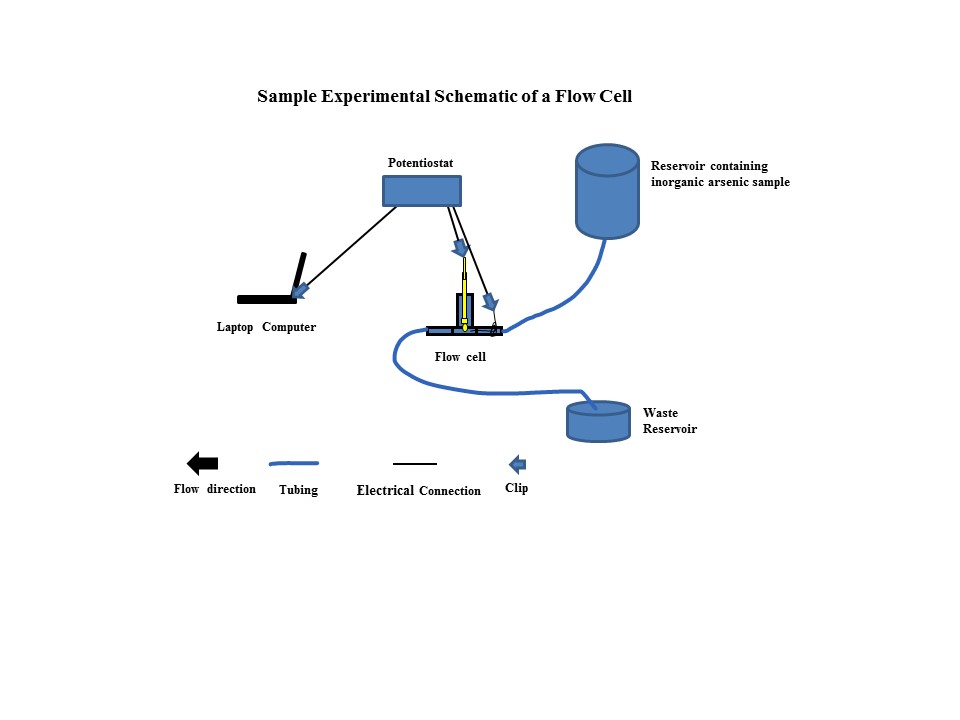