The cryo-SEM image of the catalyst ink is shown in Fig. 1(a). The brighter particle and darker region correspond to the Pt catalyst nanoparticles and the frozen solvents, respectively. The Pt/C particles formed the several hundred nanometers to micrometer size agglomerates in the catalyst ink. The cryo-SEM images of the surface structure on the CL60 and CL180 are shown in Fig. 1(b) and (c), respectively. The bright particles with several-hundred nanometers correspond to the frost on the sample surface. In CL60, the shape of sample surface of the CL was flat and the agglomerates of Pt/C particles observed in the catalyst ink could not be seen on the surface. In CL180, the several ten micrometers agglomerates of the Pt/C particles could be seen in the CL. In contrast, the solvents and ionomers exhibited the network structure, which connected between the Pt/C agglomerates. In CLdry, the network structure does not exist any longer as shown in Fig. 1(d). In the CL formation process, the size of agglomerated of the Pt/C particles grew to larger agglomerates induced by solvent evaporation. The structure of the CL was changed the liquid–like to the solid via the network structure. The submicron structural evolution in the CL formation process during the solvent evaporation is demonstrated by the cryo-SEM observations. The further nanostructural investigations of the catalyst ink and the CL using cryo-TEM are now in progress.

This presentation is based on results obtained from the PEMFC Research and Development Program for “Highly‐Coupled Analysis of Phenomena in MEA and its Constituents and Evaluation of Cell Performance” commissioned by the New Energy and Industrial Technology Development Organization (NEDO). 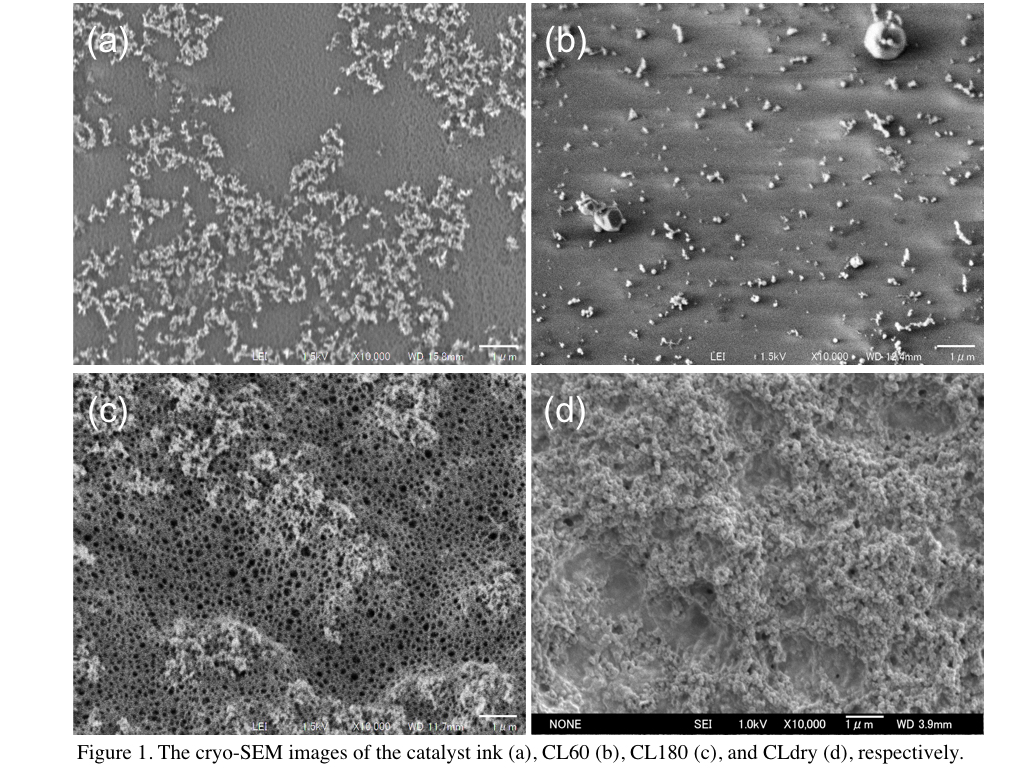