Chesapeake G (Gaylord National Resort and Convention Center)
M. Easton, L. C. Player, A. F. Masters, and T. Maschmeyer (The University of Sydney)
The efficiency and quality of electrodeposit from metals can be influenced by supporting electrolytes and additives. These additives can alter the physical properties of the solution, or vary the speciation of metal ions, influencing their deposition morphology. 1,2,3 A prevalent group of additives are ionic liquids (ILs), salts which are commonly defined to have a melting point below 100 °C. ILs have been implemented as compounds capable of forming favourable complexes with metal ions, influencing electrodeposition morphology.4.5 Pyridinium-based ILs are of interest as they have shown promise in rechargeable batteries, dye-sensitized solar cells and conductive polymers.6 In this work, we demonstrate their limits for use as electrolyte additives in zinc-containing cells.

The reversible electrodeposition of zinc from an aqueous electrolyte containing zinc bromide and 1-ethylpyridinium bromide ([C2Py]Br) was investigated by cyclic voltammetry, chronoamperometry and scanning electron microscopy. Unusual voltammetric behaviour for the Zn/Zn(II) redox couple was observed in the presence of [C2Py]Br. Figure 1 shows three consecutive CVs for the Zn/Zn(II) redox couple from equimolar solutions of zinc bromide and 1-ethylpyridinium bromide ([C2Py]Br) with KCl supporting electrolyte. Passivation of the redox couple was observed after a single deposition/stripping cycle at switching potentials less than –1.25 V vs Ag/AgCl (Figure 1 inset). This unusual behaviour is attributed to the reduction of 1-ethylpyridinium cations to pyridyl radicals, which are proposed to complex Zn2+ ions influencing the zinc electrochemistry.

This complexation behaviour was further seen to modify the nucleation process of electrodeposition, which altered the morphology of zinc electrodeposits. As shown in Figure 2, electrodeposited zinc at –1.20 V showed uniform deposition with deposits <1µm in diameter (Figure 2a). This is suggestive of an instantaneous nucleation process followed by diffusion-controlled growth. However, when zinc was deposited at –1.25 V (Figure 2b), in addition to the evenly distributed zinc, a second disc-like deposition morphology is observed with features as large as 2 µm. As expected, on depositing at –1.30 V (Figure 2c) these disc-like features become much more prominent and appear larger (~4 µm) and more wide-spread. This deposition morphology is consistent with the CV results, which indicate the presence of a second deposition process at significantly reducing potentials.

Overall, the unfavourable voltammetric behavior observed for the Zn/Zn(II) redox couple in the presence of 1-ethylpyridinium bromide was ascribed to the influence of 1-ethylpyridyl radicals, which are formed electrochemically at potentials more negative than –1.25 V vs Ag/AgCl. Deposition of zinc at potentials more negative than this results in a prominent second, slow-nucleating deposition process, generating large, disc-like morphologies (as evidenced by SEM). Thus, while the promise of alkylpyridinium IL salts has been outlined elsewhere, we have demonstrated a reducing potential limit of –1.25 V vs Ag/AgCl for metal deposition in the presence of such cations. 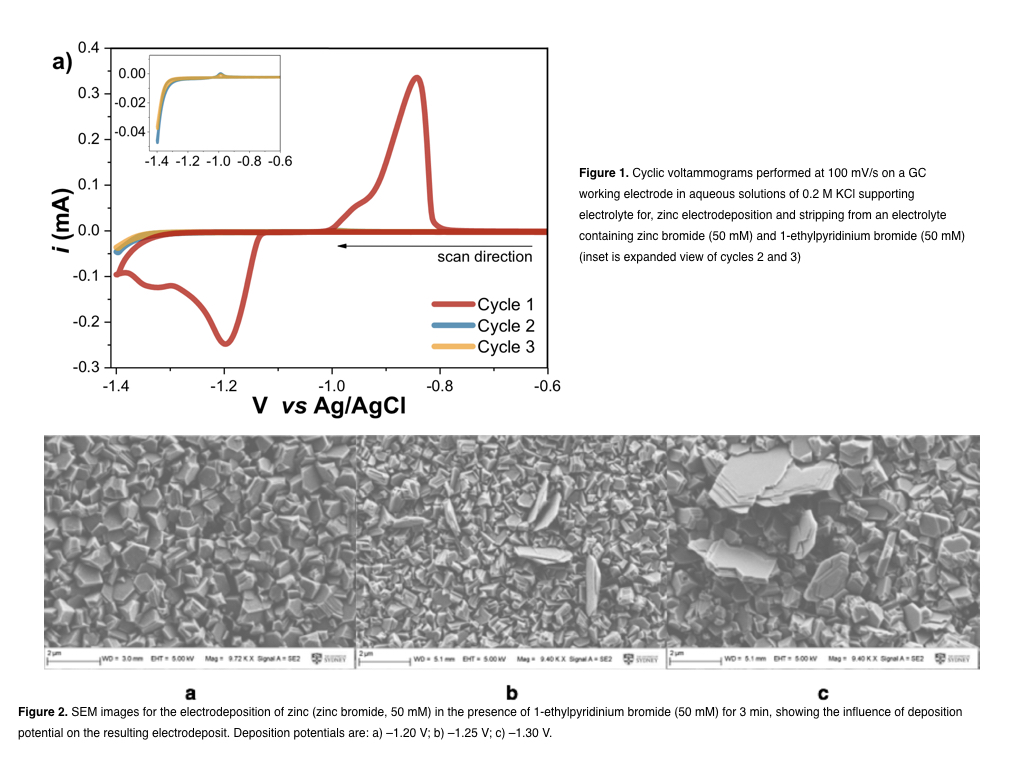