Prince George's Exhibit Hall D/E (Gaylord National Resort and Convention Center)
T. Saito (ADVANCE RIKO, Inc.)
We propose a new approach for the preparation of Pt/C catalysts by arc plasma deposition (APD), in which Pt nanoparticles are deposited on carbon in a vacuum; this method has been applied in a number of fields other than fuel cell catalysts. The solid cathode material is transformed into a completely ionized plasma that leaves the cathode with a velocity of 1-2 x 104 m/s (this number is the same for all cathode materials). This velocity corresponds to an ion kinetic energy of 20 eV (light ions such as carbon) to 300 eV (heavy ions such as platinum). Thus, the cathode material is eroded and forms an energetic plasma jet.

When carbon powder is irradiated with a platinum-based plasma, the Pt+ ions collide with the carbon and become atoms, which then migrate and interact with other Pt atoms to form nanoparticles (NPs) with dimensions of 2 to 3 nm on the carbon surface. Figure 1 shows a scanning electron microscopy (SEM) image of Pt NPs on Ketjen black. Although the surface of the Ketjen black is extremely rough, the NPs are seen to be uniformly distributed. We compared the electrochemical properties of Pt/C catalysts prepared by APD with those of the commercially available catalyst TEC10E50E. Although the electrochemical surface area (ECSA) was almost the same, the specific activity for Pt/C(APD) was about 2 times higher than that for TEC10E50E, which led to an approximately 2 times higher mass activity. However, one remaining problem with Pt/C(APD) is that NPs are not deposited in some regions. Figure 2 shows an SEM image of Ketjen black containing regions where no Pt NPs are present. To address this issue, we made improvements to the stirring vessel, and optimized deposition parameters such as the plasma pulse interval and the powder surface conditions. We will describe the effects of these optimizations on the electrochemical properties of Pt/C(APD). 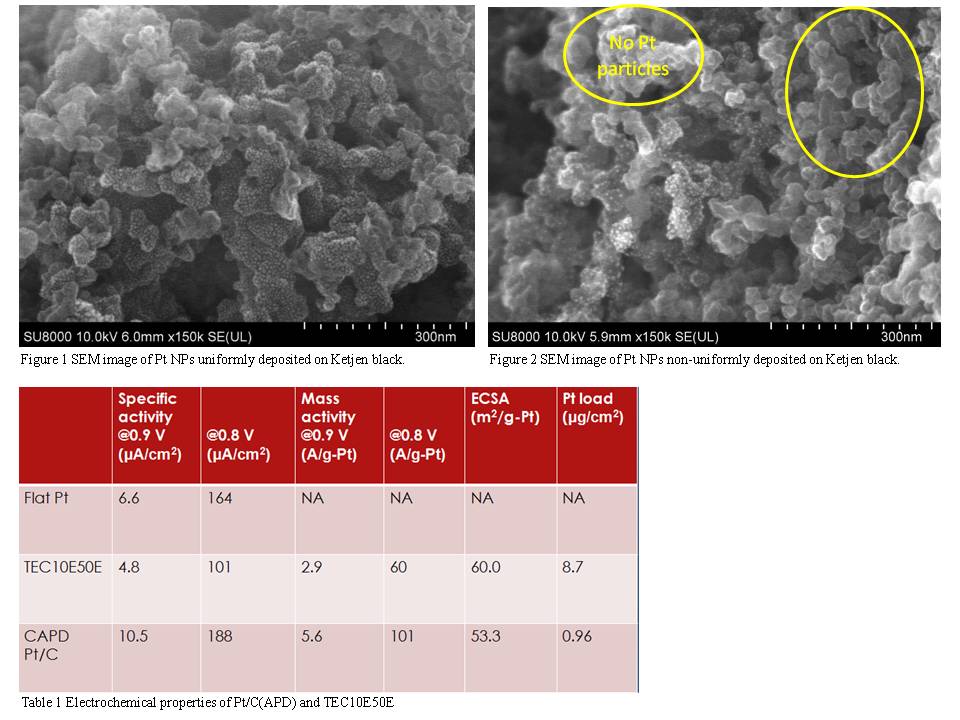