National Harbor 2 (Gaylord National Resort and Convention Center)
K. Huang (Toyota Research Institute of North America), T. Song, O. Morales-Collazo (University of Notre Dame), H. Jia (Toyota Research Institute of North America), and J. F. Brennecke (University of Notre Dame)
The efficiency of the oxygen reduction reaction (ORR) is determined by many factors, among which the adsorption of non-reactive species on the Pt surface and oxygen concentration near the Pt interface are considered the most important. Extensive research has focused on developing novel Pt based catalysts with sophisticated structures designed to weaken the adsorption of oxygenated species and enhance ORR activity. Recently, ionic liquid (IL) with high oxygen concentration have been proposed as another countermeasure to accelerate the reaction rate. (1, 2)

The degree of IL coverage on the Pt was quantitatively estimated using (bi)sulfate ion as an indicator. It was found that the ORR activity was promoted when there was partial IL coverage, while full IL coverage resulted in degradation of the performance. Durability studies showed that in the presence of the IL Pt dissolution can be mitigated. A balance between activity and stability can be achieved with an optimized IL coverage. 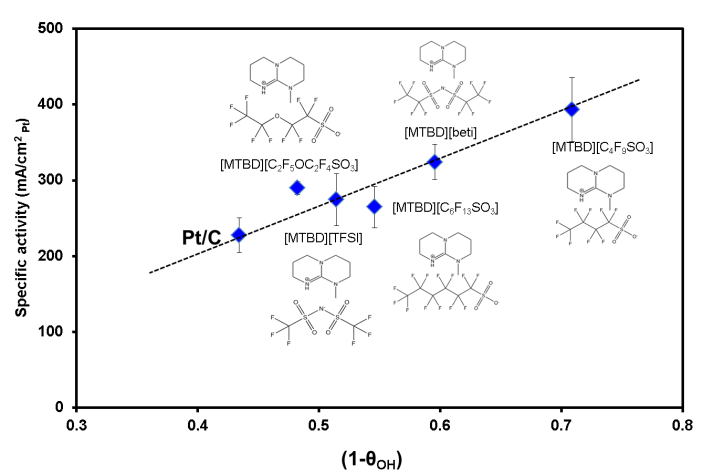