Figure 1 shows images obtained with a transmission electron microscope (TEM) of PtCo/GCB, H-PtCo/GCB, and Pt-skin coated PtCo catalyst (PtxAL-PtCo/GCB) with the histograms of the particle-size distributions. Particle sizes were very uniform with the diameters of 2.5±0.2 nm for PtCo/GCB and H-PtCo/GCB, and of 3.0±0.3 nm for PtxAL-PtCo/GCB. By the electron diffraction (Table 1), the lattice of PtCo/GCB was determined as fcc. After the hydrogen treatment at 400 oC,3 the lattice became fct for H-PtCo/GCB. After the addition of a Pt-skin on H-PtCo/GCB, the lattice was mostly (ca. 97%) fct and partially (ca. 3%) fcc, presumably due to the addition of a Pt-skin. By X-ray absorption fine structure (XAFS) measurements, Pt and Co atoms were found to be very uniformly distributed in PtCo/GCB. For H-PtCo/GCB, neither the atomic distances nor the coordination numbers showed a large change, whereas for PtxAL-PtCo/GCB, the Pt-Pt coordination number increased showing the formation of a Pt-skin layer.

The effect of the Pt-skin layers was examined in a 0.1-M HClO4 solution at 65 oC with a multi-channel flow double-electrode cell2 on the activity towards the oxygen reduction reaction and the durability examined by the accelerated durability test according to the protocol for load-change cycles4 recommended by the Fuel Cell Commercialization Conference of Japan (FCCJ) (Fig. 2). Both the durability and the mass activity evaluated at 0.85 V vs. the reversible hydrogen electrode were the highest at PtxAL-PtCo/GCB followed by H-PtCo/GCB. By in situ XAFS measurements, the layers of Pt skins were indicated to exist at the surface of the alloy particles in 0.1 M HClO4. After 30,000 cycles, the initial high activity at PtCo/GCB was lost and became almost identical to that at a commercial Pt catalyst supported on carbon black (c-Pt/CB) because of Co leaching out.5,6

The efficiency/usefulness of the atomically-controlled Pt-skin layers was clearly demonstrated. Detailed structural analysis during the durability test is now in progress. 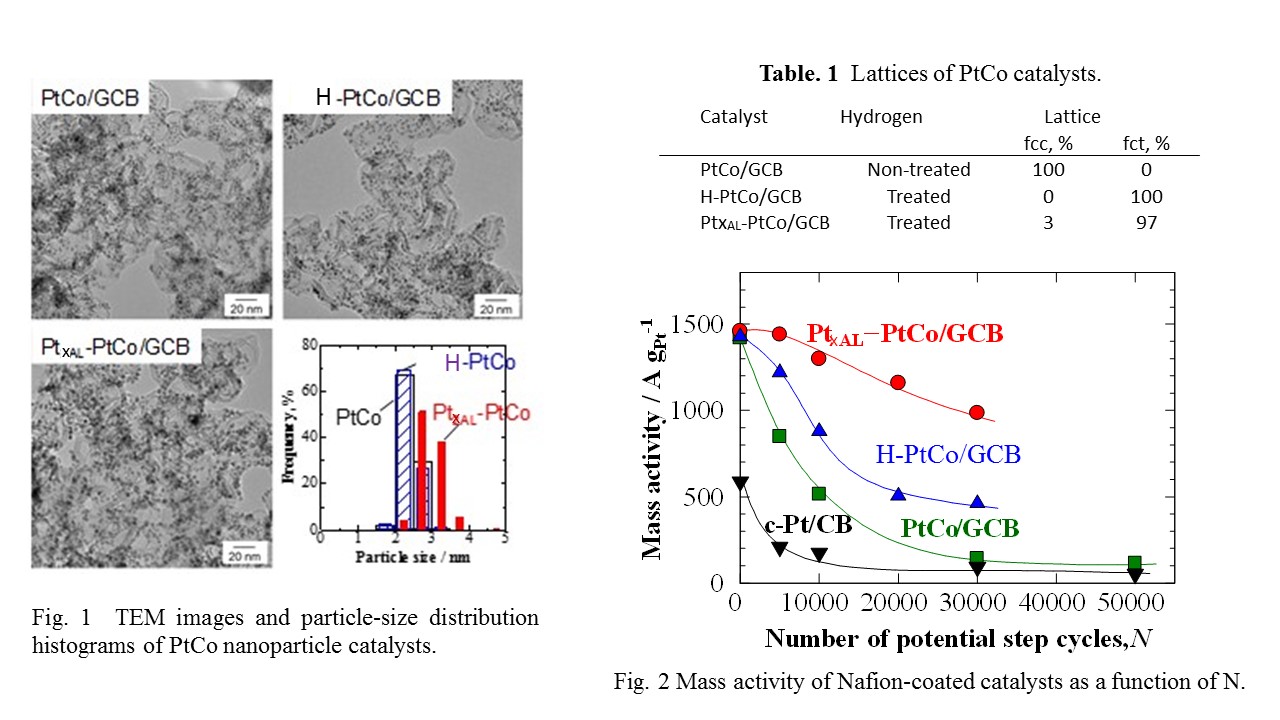