It is of great importance to decrease Pt usage in PEFCs for cost reduction. Carbon supported Pt shell-Pd core structured catalyst (Pt/Pd/C) is a promising candidate for the decrease owing to high Pt utilization and ORR activity [1]. We found that ORR specific activity of the catalyst drastically enhanced with an accelerated durability test (ADT), while electrochemical surface area (ECSA) largely decreased due to agglomeration of the catalyst nanoparticles (NPs), resulting in a moderate increase of ORR mass activity [2]. Thus, it is essential to mitigate the ECSA decay for further enhancement of the ORR mass activity. In the present study, poly-dopamine coating was investigated to suppress the catalyst NPs’ agglomeration with the ADT and further enhance the ORR mass activity of the catalyst.

It has been reported that polymerization of the dopamine was accelerated by O2and that poly-dopamine (PD) can be coated on various materials such as metals, metal oxides, organic films and plastics at low temperature (30°C) [3, 4]. For carbon coating, carbonization of the PD is carried out by heat treatment in non-oxidative atmosphere [5] and it has been demonstrated that size of the PD coated PtFe NPs (6.5 nm) did not change before and after the heat treatment at 700°C, indicating that the carbon coating using the PD precursor well suppressed coalescence and sintering of the NPs against the heat treatment [6].

This study was supported by NEDO, Japan. 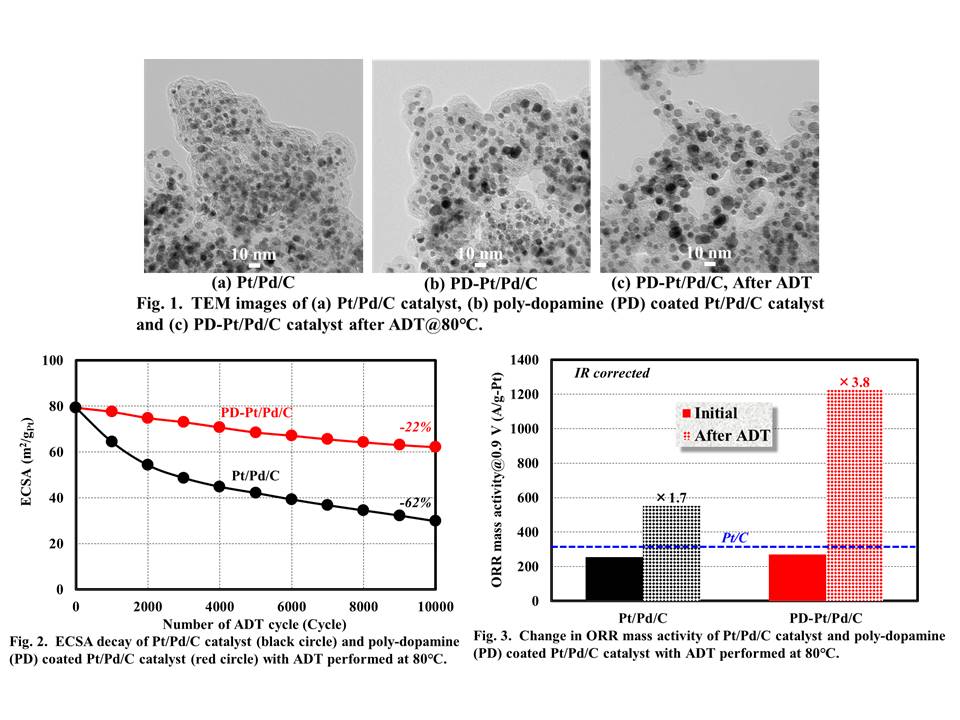