Prince George's Exhibit Hall D/E (Gaylord National Resort and Convention Center)
T. Chen, S. Takahashi, and K. Waki (Tokyo Institute of Technology)
Carbon nanotube based electrocatalysts have been expected to be the alternative catalysts for the Oxygen Reduction Reaction (ORR) due to their competitively high activity and low cost compared with the conventional Pt/C catalysts. Although pristine carbon nanotubes are known to exhibit poor ORR activity, doping heteroatoms, introducing transition metals and controlling carbon structure can be applied to enhance their ORR activity extensively.[1-4] Nevertheless, the origin of the ORR activity is still not well understood. The Metal-Nitrogen-Carbon complex (MNC) and Nitrogen containing carbon (CNx) related sites have been proposed to be the possible active sites in nitrogen doped carbon materials. In both MNC and CNx structures, it is widely accepted that pyridinic nitrogen plays an important role in the ORR. To further verify the ORR mechanism, in this study, we conduct durability tests to study the relationship between ORR activity and nitrogen structures.

The LSV of HA-N900, HA-N900 after durability test (Dur-HA-N900) and re-nitrogen doping of Dur-HA-N900 (Re-N900) in 0.1M HClO4 were shown in Figure 1. As pyridinic nitrogen is always related to the high ORR activity, it is reasonable that along with the ORR activity decreases after the durability test, the pyridinc nitrogen concentration also decreases. Indeed, this phenomenon was confirmed by conducting XPS measurements for the samples. On the other hand, interestingly, we found that even though by introducing pyridinc nitrogen to the same level as that before the durability test through re-nitrogen doping, the ORR activity could not return to the initial state. The ORR activity, along with the role of different kind of nitrogen composition and the metal impurities’ effect will be discussed further on the conference through detailed characterizations with X-ray Photoelectron Spectroscopy (XPS), Temperature Programed Desorption (TPD) and Raman Spectroscopy.

The MWCNTs used were provided by Showa Denko KK Japan (VGCF-X, diameter: 15nm, approximate length: 3μm; containing Fe impurities <1 wt%). As a precursor, functionalized and purified MWCNT was obtained by heat and acid treatment in the mixture of H2SO4/HNO3 (HA). [5] Then HAMWCNTs were nitrogen doped in 10% NH3/ Argon gas at 900℃(HA-N900). The durability test was conducted by cycling the catalysts under Ar gas bubbling in 0.1M HClO4 with a scan rate of 500mV/s, voltage window [1.0-1.5] V vs. RHE for 1600 cycles.

This work partially was supported by the Center for Low Carbon Society Strategy (LCS) and Shin-Etsu Chemical Co. Ltd. , Japan. Their contribution is greatly appreciated. 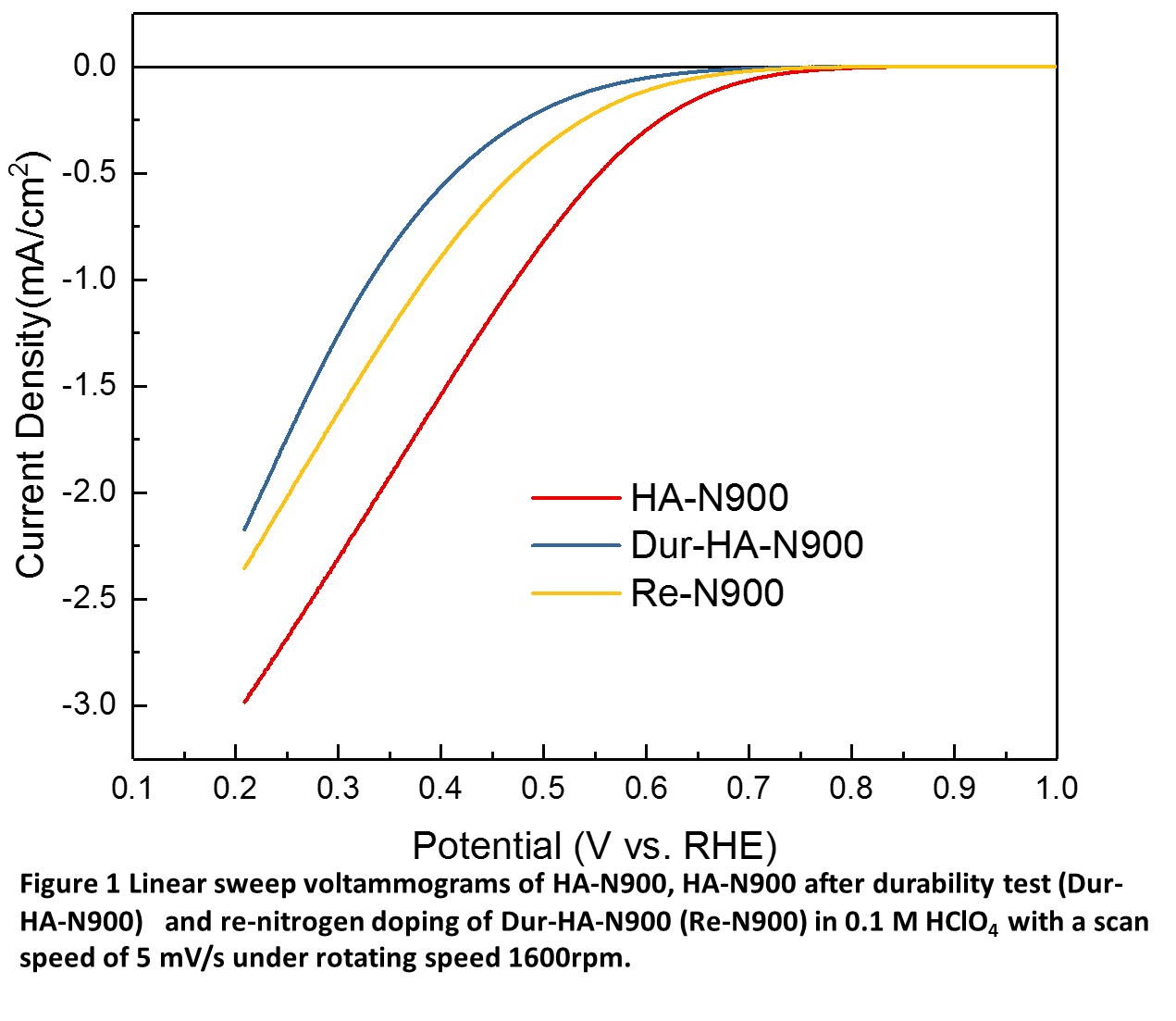