Recent years have witnessed growing hopes that lithium-ion secondary batteries will find applications in large-scale devices, creating demand for further increases in energy density and output density. Magnesium ion is divalent ion and has the nearly ionic radius as lithium ion. Then, magnesium secondary battery expects as a next generation battery material due to high energy density than that of lithium ion. MgCo2O4, one of magnesium ion cathode material, is synthesized and examined the battery characteristic property1). Although, the other oxide cathode materials are admitted to investigate the suitable structure with diffusion pathway of Mg ion. The purpose of the present study was to evaluate the electrochemical property, to analysis the crystal and electronic structures for a magnesium cathode material, spinel system of MgCo2-xMnxO4, using the first principle calculation and quantum beam.

The spinel type of MgCo2-xMnxO4 samples were synthesized by reverse co-precipitation method1). The obtained sample of metallic components was determined using ICP and of charge and discharge test (a two-electrode flat cell (HS cell) : 3.5 - 0V vs. Mg/Mg2+, three electrode cell : 0.345 ~ -1.155V vs. Ag/Ag+, electrolyte : 0.5M-Mg(N(SO2CF3)2)2/CH3CN or Triglyme) was performed. Rietveld analysis is performed by synchrotron X-ray diffraction (BL19B2, Spring-8) and neutron diffraction (iMATERIA, J-PARC) data. The determination of valence of Co and Mn atom is analyzed using synchrotron X-ray absorption spectroscopy (BL01B1, Spring-8). The structural relaxation calculation was performed by generalized gradient approximation (GGA-PBE) exchange-correlation potential used with a plane-wave cutoff energy of 500 eV, and a (1×1×1) k-point mesh was sampled, corresponding to the inverses of the lattice constants on Vienna Ab-initioSimulation Package (VASP) code. The convergence criterion for structural optimization was that the energy difference per iteration be less than or equal to 0.02 eV/Å. Initial structure that is a 1×1×1 cell was created and structural relaxation was performed on various initial structural models to determine the energetically optimal structure. Initial structure models were constructed to ensure reproduction of the occupancies determined by an average structure analysis from Rietveld analysis using synchrotron X-ray diffraction.

From the measurement of XRD pattern of MgCo2-xMnxO4, all of diffraction peak could be assigned to space group Fdm. The calculated stable structure of MgCo2O4 and MgCo1.5Mn0.5O4 which space group is Fdm and cell size is a 1×1×1 cell are shown in figure 1 a) and b), respectively. From Figure 1 a), Mg atoms exist only 8a site and Co atoms exist only 16d site in stable structure of MgCo2O4. It is found that the cation mixing is not occurred and the diffraction pathway of Mg is formed in MgCo2O4. From figure 1 b), Mg atoms posit only 8a site and Co and Mn atoms posit only 16d site in Mn replaced material, MgCo1.5Mn0.5O4. Also, from the result of Rietveld analysis using synchrotron X-ray diffraction, the occupancy of 16d site of Mn atom become large with increasing the amount of Mn. The result of first principle calculation is in agreement with Rietveld analysis using synchrotron X-ray diffraction. In the calculated stable structure of MgCo1.5Mn0.5O4, the diffraction pathway of Mg and Mn atoms layer are formed. Next, the distortion parameter of M-O6 (M=Co, Mn) and Mg-O4 polyhedral are calculated in stable structure of MgCo2O4 and MgCo1.5Mn0.5O4. From the charge and discharge profile using three electrode cell, it is formed that the first discharge capacity of MgCo1.5Mn0.5O4 is lower than MgCo2O4 at 60oC. On the other hands, the cycle performance of MgCo1.5Mn0.5O4 is improved than MgCo2O4. The averaged bond length of Mg-O for MgCo1.5Mn0.5O4 is little shorter than that of MgCo2O4. Therefore, the interaction between Mg and O atom in MgCo1.5Mn0.5O4 may be slightly stronger than MgCo2O4, and Mg ion is difficult to detach and insert in crystal. Accordingly, the first discharge capacity of MgCo1.5Mn0.5O4 is lower. On the other hands, the distortion parameter of Mg-O4 and Co-O4 polyhedral in MgCo1.5Mn0.5O4 becomes larger than that in MgCo2O4. In other words, the strength of Mg-O bond and Co-O bond are localized by the influence of Mn. With increasing the charge and discharge cycle, Mg ion might be easy to detach and insert from weakly interaction between Mg and O. In this presentation, the bond valence sum, the electron density, the structural stability with Mg detachment and insertion and the analysis of electronic structure will be discussed.

This work was supported in part by ALCA-SPRING, Japan. We are deeply grateful for the cooperation. 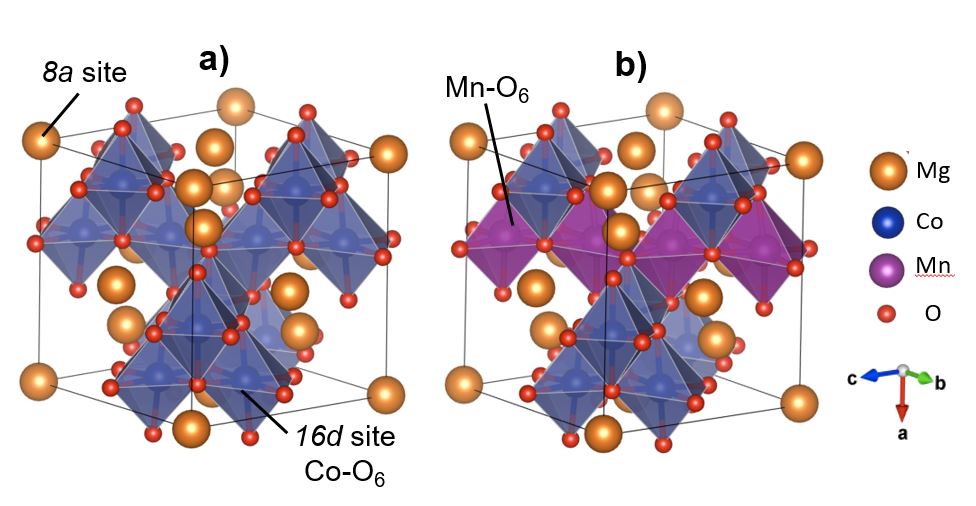