Chesapeake G (Gaylord National Resort and Convention Center)
K. Iwasaki (Graduate School of Engineering, Osaka University), H. Matsumoto (AIST), T. Tsuda (Graduate School of Engineering, Osaka University), and S. Kuwabata (AIST, Osaka University)
Room-temperature ionic liquid (RTIL), which is the salt constructed of just cation and anion to be able to liquefy at ambient temperature, has fascinating characteristics such as negligible vapor pressure, wide liquidus temperature range, wide electrochemical window, and relatively-high ionic conductivity. Many applications using RTIL e.g., non-volatile electrolyte for energy storage devices, recyclable green solvent for electroplating, and a functional synthetic lubricant oil, have been proposed owing to RTIL’s interesting features.1 Another feature is the physicochemical properties and functionality can be roughly controlled by a combination of anion and cation. Creation of novel ionic species, especially anion, are really expected for further improvement. Recently we have focused on aryltrifluoroborate ([ArBF3]− (Figure 1)) because of the low surface charge density needed to decrease the lattice energy and the easy modification of [ArBF3]−. In present study, we investigated the effects on the physicochemical properties when RTIL structure was systematically changed by using the [ArBF3]− families with different substituents on the aromatic ring.

RTILs used in this study were synthesized by a metathesis reaction using appropriate potassium aryltrifluoroborate (K[ArBF3]) prepared by the reported procedure2 and 1-butyl-3-methylimidazolium chloride ([C4mim]Cl). All electrochemical experiments were performed in a three-electrode cell. The working electrode was a glassy carbon disk (diameter: 1.0 mm), which was polished with an alumina suspension before use. A platinum wire (dimeter: 0.5 mm) was used as the counter electrode. The reference electrode was constructed by placing a Ag wire into a 6 mm diameter glass tube terminated with a vycor® glass and filling this tube with [C4mim][N(SO2CF3)2] containing 0.05 M Ag[N(SO2CF3)2]. All the experiments except viscosity measurement were carried out in an argon-filled-glove box (O2 and H2O < 1 ppm). Viscosity was measured by an electromagnetically spinning viscometer without any contamination.

RTILs used in this study consist of [C4mim]+ cation and [ArBF3]− anion. The anionic species were non-substitutive phenyltrifluoroborate ([PhBF3]), (meta-fluorophenyl)trifluoroborate ([m-FC6H4BF3]), (meta-methoxyphenyl)trifluoroborate ([m-OMeC6H4BF3]), (meta-trifluoromethylphenyl)trifluoroborate ([m-CF3C6H4BF3]), and (meta-cyanophenyl)trifluoroborate ([m-CNC6H4BF3]). All the prepared RTILs showed favorable fluidity (< 294 mPa·s) and ionic conductivity (1.09 mS·cm−1 <) at ambient temperature (298 K). Electrochemical stability was estimated by a liner sweep voltammetry technique. Each scan was started from the open circuit potential, which was referred to Ag(I)/Ag redox system. The electrochemically stable potential range called electrochemical window (EW) is commonly used for the discussion of the electrochemical stability for electrolytes including RTILs. The linear sweep voltammograms recorded in the RTILs are shown in Figure 2, and the cathodic limiting potential (Ec), the anodic limiting potential (Ea) and electrochemical windows (EW = Ea − Ec) estimated from Figure 2 using the cut-off current density of ±0.1 mA·cm−2 are summarized in Table I. All the cathodic limiting potentials showed almost the same values (−2.80 ~ −2.97 V vs. Ag(I)/Ag) because of the same cationic species. On the other hand, the anodic stability was strongly dependent on the anionic species. For example, as shown in Figure 2, the anodic decomposition of [C4mim][m-OMeC6H4BF3] and non-substitutive [C4mim][PhBF3] initiates at 0.327 and 0.799 V vs. Ag(I)/Ag, respectively. In general, an anodic limiting potential is subject to HOMO energy of anion. Thus, [C4mim][m-OMeC6H4BF3], which possesses an electron-donating methoxy group (OMe), show the smaller EW (3.26 V) than that of non-substitutive [C4mim][PhBF3] (3.65 V) since the HOMO energy of [m-OMeC6H4BF3]− (−4.67 eV) is higher than that of [PhBF3]− (−4.94 eV). This means that RTILs with an electron-withdrawing group can display relatively large Ea due to the lower HOMO energy than RTILs without any group. However, unexpected and intriguing results as described below were obtained. The small oxidation currents caused by the anion decomposition were recognized at 0.611 ~ 0.799 V in the RTILs with electron withdrawing groups: F; CF3; and CN. Interestingly oxidation current became almost zero up to 5.0 V once the small oxidation current flowed. We speculated that an electrochemically inactive film was formed on the electrode surface at the first oxidation wave. By using various analytical approaches such as IR spectroscopy, SEM observation, and EDX analysis, it was found that the film has a unique surface morphology and contains the elements derived from aryltrifluoroborate such as carbon and fluorine. 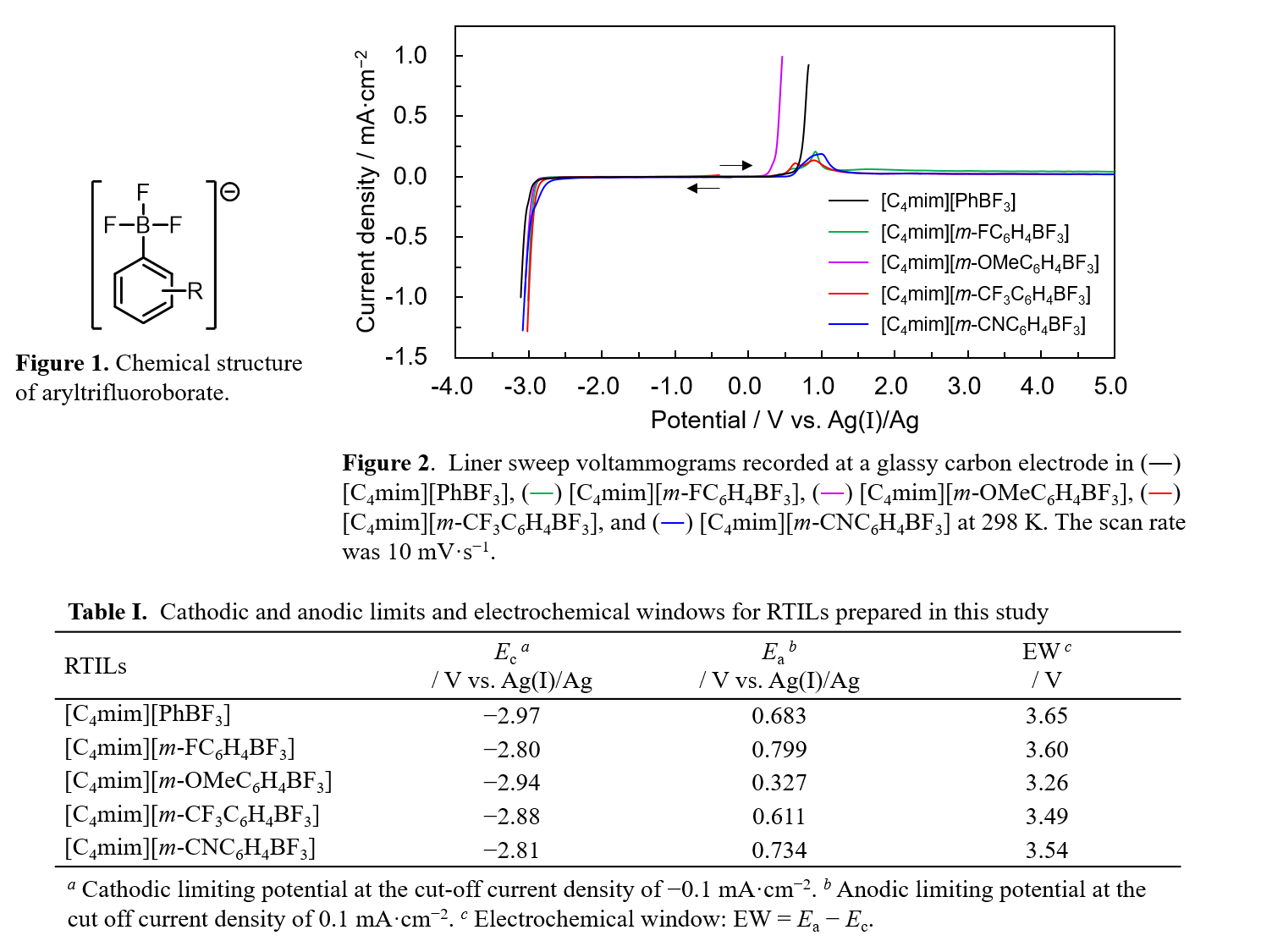