2066
(Invited) Electrodeposition and Development of Mg and Ca Metal Anodes

Chesapeake K (Gaylord National Resort and Convention Center)
A. Ponrouch (ALISTORE-ERI)
Various metals have been used as battery anodes in electrochemical cells ever since the birth of batteries with Volta’s pile and also in the first commercialized primary (Zn/MnO2, Leclanché 1866) and secondary (Pb/acid, Planté 1859) batteries. The idea and prospects of building a technology based on lithium are much more recent, as it required moving away from aqueous electrolytes. However, the first Li-MoS2 cells with specific energy two or three times higher than the current Ni/Cd or Pb/acid cells were withdrawn from the market after safety difficulties were experienced with overheating on recharge related to dendrite growth. As an alternative, secondary Li-ion batteries avoiding the use of lithium metal anodes were commercialized by Sony in 1991. In contrast with Li metal anode, electrodeposition of Mg and Ca does not seem to be plagued with dendrite formation.1,2 In addition to the low cost of the raw materials ($5000/ton, $100/ton and $265/ton for Li2CO3, CaCO3 and MgO2, respectively), such alternative technologies would benefit from high standard reduction potentials (ca. -2.87 V and -2.37 V vs NHE for Ca and Mg, respectively, as compared to -3 V for Li) and high theoretical electrochemical capacities (both gravimetric and volumetric) for the metal electrode, while relying on the 5th (Ca) and 8th (Mg) most abundant elements on the Earth’s crust, respectively, whereas Li is the 25th. These metals are thus interesting candidates as anodes in rechargeable batteries.

Pioneering research work by Aurbach et al.3,4 allowed to conclude that the electrochemical behavior of Ca and Mg metal anodes in conventional organic electrolytes is surface-film controlled, as is the case for Li, but Ca and Mg plating is virtually impossible, which was attributed to the lack of divalent cation transport through the passivation layer (solid electrolyte interphase or SEI). Therefore, research has been focusing on electrolyte formulation in which no SEI is formed. Recently Ca plating and stripping through a stable SEI layer has been demonstrated, setting out the basis for the development of new electrolytes for divalent cation based batteries with high resilience upon oxidation.2 The effect of several factors influencing the Ca deposition/stripping will be presented. Also, the reliability of the so called half-cell configuration in which Mg or Ca pseudo reference and counterelectrodes are used will be discussed and a systematic evaluation of the non-polarizability and stability in the electrolytic environment will be presented for these metal electrodes. 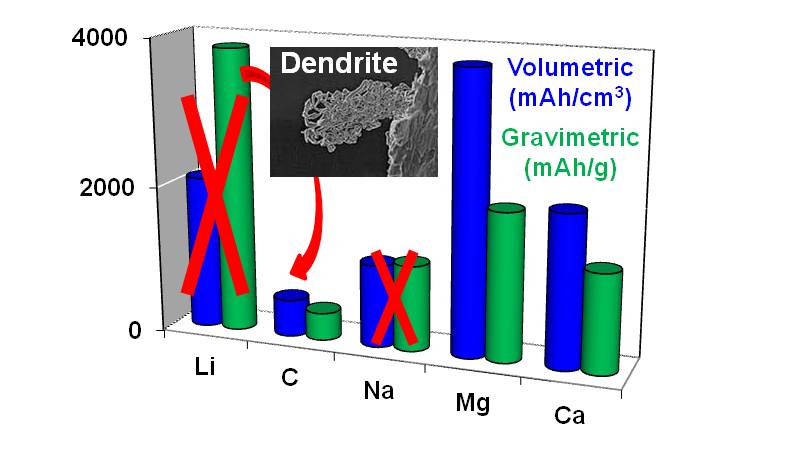