National Harbor 8 (Gaylord National Resort and Convention Center)
D. Guay (EMT-INRS), E. Bertin, M. Fan, S. Garbarino, A. C. Tavares (INRS-EMT), C. Roy (Technical University of Denmark), S. Kazemi (BC Research), and G. A. Botton (McMaster University)
The rise in atmospheric CO2 concentration since the beginning of the Industrial Age has raised concerns on its potential effect on global temperatures. While several factors such as natural climate changes, variations in solar activity, and volcanic eruptions may also contribute to observed variations in CO2 concentrations, it has been well established that anthropogenic emissions contribute to the annual emission of over 30 billion tonnes of CO2, only about half of which is recycled through natural pathways.

CO2 conversion into value-added products is an avenue explored to mitigate environmental issues. Conversion methods appear promising, as they offer the potential to produce liquid and gaseous fuels for use either in the aeronautics industry, or as a chemical storage method for the intermittent energy produced by windmills and photovoltaic panels. Fuel synthesis may be achieved via either the production of a syngas mixture (H2 and CO) through the water gas shift reaction and subsequent conversion into hydrocarbon fuel through processes such as Fisher-Tropsch, or by direct electrochemical reduction of CO2. While all methods may result in similar conversion yields, depending on the catalyst used, direct electrochemical conversion of CO2 into value-added products is a low-temperature process, with the further advantage of requiring relatively simple equipment.

Formic acid, or formate salts, are used in a variety of chemical processes such as electrowinning, leather tanning, and aircraft de-icing. Alternatively, formic acid and formate salts may be considered a hydrogen storage medium. Direct formic acid, and more recently, direct formate fuel cells, have been investigated in the literature as they demonstrate significant benefits over methanol fuel cells, including higher open circuit voltage and lower crossover.

Pb and Bi are promising catalysts with good selectivity for formate. Bismuth is non-toxic and has negligible environmental impact. It has few commercial applications, and its price has been low and relatively stable in recent years. In the case of Lead, it can be prepared in the form of dendrites with nanometre-sized tips. Local high electric fields can exist at the tip of these dendrites that can induce a concentration of electrolyte which in turn leads to a high local concentrations of CO2. 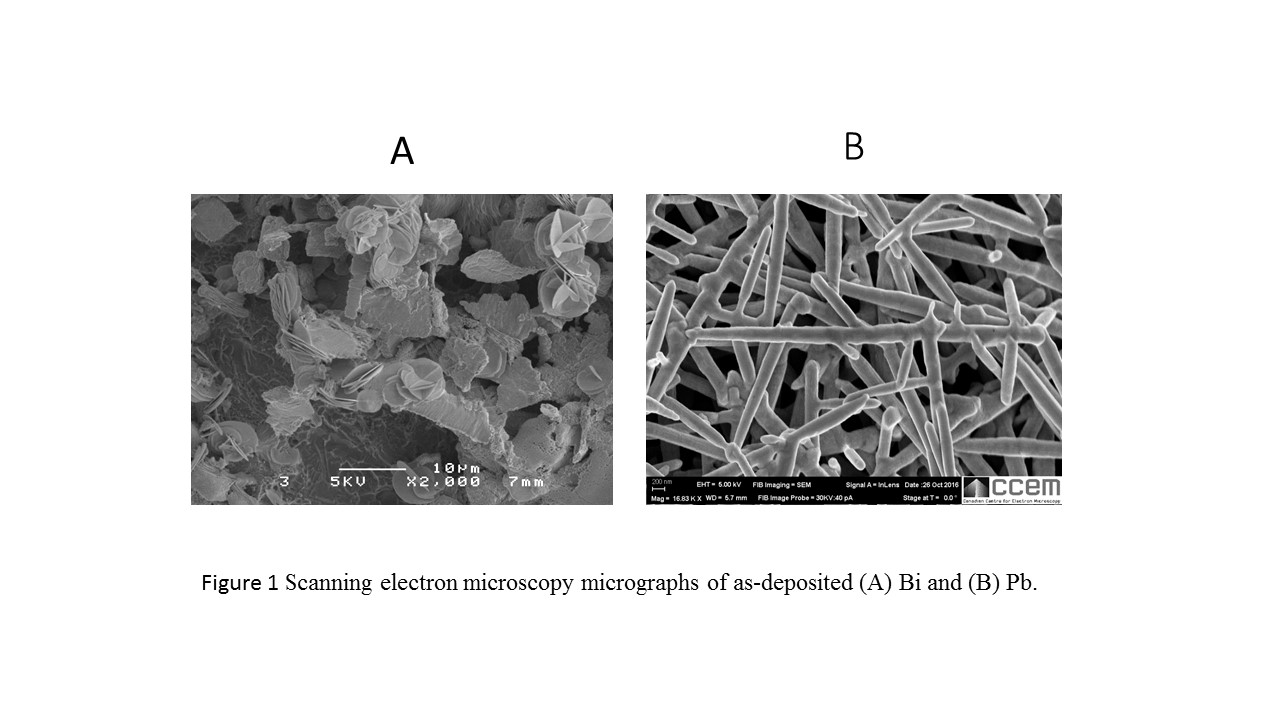