National Harbor 3 (Gaylord National Resort and Convention Center)
A. Phillips, J. Mackay (National Renewable Energy Laboratory), J. M. Porter (Colorado School of Mines), M. Ulsh, and G. Bender (National Renewable Energy Laboratory)
The polymer electrolyte membrane fuel cell (PEMFC) is capable of high power outputs at low operating temperatures, making it an attractive alternative to the petroleum-based internal combustion engine (ICE) common in vehicular applications [1]. PEMFC commercialization is contingent on future cost reductions and durability improvements. According to the Department of Energy (DOE), fuel cell systems (FCS) will have to surpass annual production levels of 500,000 units at $40/kW in order to compete with current ICEs [2-3]. Roll-to-roll (R2R) methods can achieve high yields at decreased per-area costs, enabling FCS manufacturing and cost targets to be met. Unfortunately coating irregularities that harm the performance and/or durability of PEMFC membrane electrode assemblies (MEAs) can occur during R2R fabrication processing [4-5]. This work studies the effect of a subset of such irregularities on performance when operating the New European Drive Cycle (NEDC). If the MEA experiences statistically significant lower performance as a result of a coating irregularity, then the irregularity should be classified as a defect. Classification of irregularities as defects will ultimately assist the industry by developing threshold detection limits for in-line quality control diagnostics.

Samples were made in-house by creating Pt/C electrodes of 5 cm2 area and 0.2/0.2 mg Pt/cm2 loading. These samples were either pristine or contained an intentionally introduced 100% catalyst reduction spot centered on the cathode. Electrode coating irregularities ranged from 0.0625 to 0.125 cm2, or 1.25% and 2.5% of the MEA active area, respectively. Membrane materials were NRE-211 (25 µm) and NRE-212 (50 µm). Operating conditions for all samples were Tcell: 80°C, anode/cathode relative humidity (RH) at 100/100%, 105/350 sccm H2/Air, and 150/150 kPa backpressure. The MEAs were conditioned and subsequently subjected to 1008 repetitions of the NEDC drive cycle. The single drive cycle profile of the NEDC is shown in Figure A. The NEDC combines urban driving conditions, i.e. low engine load and lower speeds similar to busy city driving, and extra-urban driving conditions, i.e. more transient operation and higher speeds similar to highway driving. At the beginning of life and every 72 cycles onwards, a current controlled polarization (VI) curve was performed.

Figure B displays polarization data of two MEAs made with NRE-211 membrane: one pristine and one having a 0.0625 cm2 coating irregularity. The figure shows, for each sample, one VI curve taken at beginning of life and one at the end of test. While the performance at beginning of life was comparable for both samples, the sample with the coating irregularity showed a reduced performance after 1008 cycles when compared to the pristine sample. Figure C shows the cell open circuit voltage (OCV) as a function of cycle number. The four samples were made with NRE-211 and NRE-212 membranes: two pristine and two having a 0.125 cm2 coating irregularity. The MEA made with the 25 µm membrane experienced a sharp decline in OCV starting at around 500 cycles. Conversely, the MEA with the same sized irregularity but made with 50 µm membrane, retained its OCV throughout the entirety of the experiment. Figure D displays the performance normalized to the beginning of life at 1 A cm-2 for three MEAs made with 50 µm membrane. One was pristine and the other two had 0.0625 cm2 and 0.125 cm2 coating irregularities. The data indicate that throughout the entirety of the experiment the coating irregularities may have caused increased performance degradation. In this presentation, we will discuss how irregularity location and size can impact PEMFC performance, and how the NEDC drive cycle paired with electrochemical measurements can be potentially used as a defect classification method. 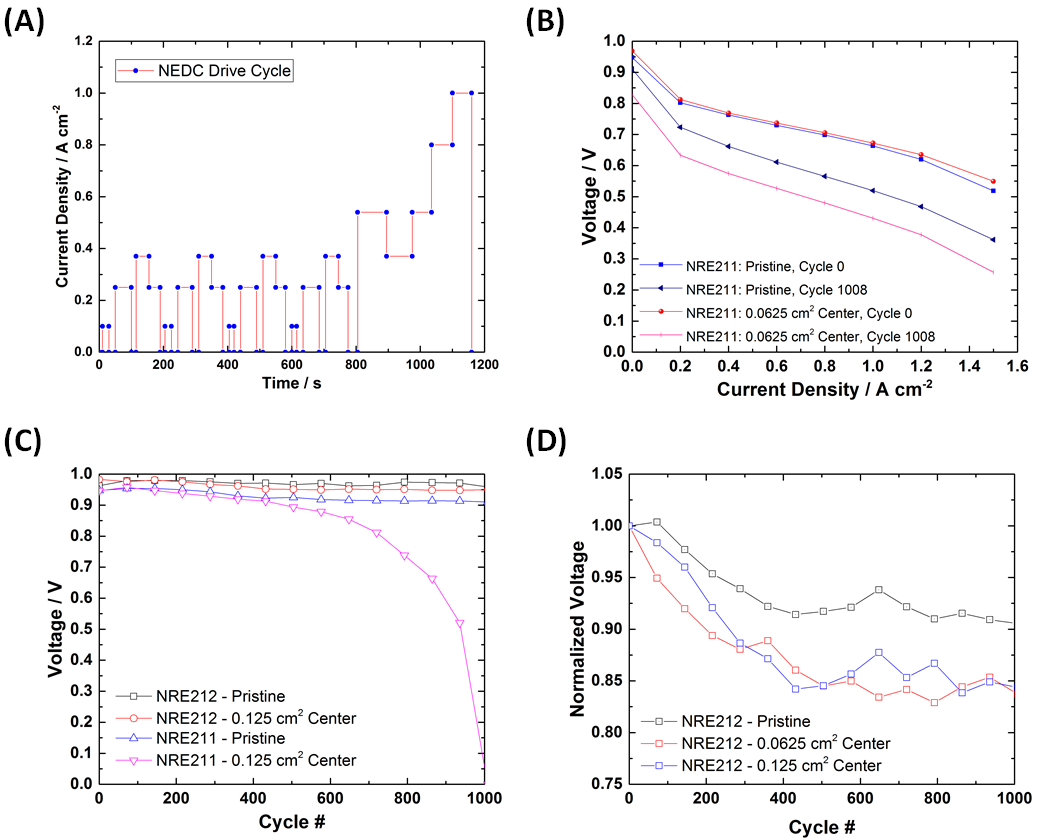