Recent interest in the magnesium rechargeable batteries may be attributed both to their technological potential and to the fact that they represented an intercalation mechanism of magnesium into the oxide materials. The chevrel compound, Mo6S8, has been attracted much attention because of its high reversibility and excellent cycle life. The low stability and capacity, however, have led to the investigation of alternative materials. So far, the delithiated Li compounds, LiFePO4 and Li3V2(PO4)3, have been studied to show high specific capacities of about 300 mAh g-1 and 200 mAh g-1, respectively. Although the theoretical capacity of delithiated Li1-xNi0.5Mn0.5O2 exceed 500 mAh g-1, the examination of the use as the cathode of magnesium rechargeable battery has not been performed.

The synthesis of delihitated Li1-xNi0.5Mn0.5O2 has opened route for the electrochemically or chemically delihiated methods [1]. The advantage of such an electrochemically method is to control the deilthiation amount whereas a chemically method is to obtain the delithiated sample without the additives such as conductive carbon and PTFE binders. In this study, the delithiated Li1-xNi0.5Mn0.5O2 was synthesized and analyzed about the crystal structures and valence states of Ni and Mn before and after magnesiation.

The LiNi0.5Mn0.5O2 was synthesized via a traditional solid-state reaction route. The LiOH·H2O, NiO and MnO2 were thoroughly mixed by planetary ball milling. The obtained powders were heated at 600 °C in air for 5 hours and then pressed into a pellet to calcine at 1000 °C in air for 10 hours.

The delithiated Li1-xNi0.5Mn0.5O2 was prepared by electrochemical method and chemical one using NO2BF4 oxidizer. The LiNi0.5Mn0.5O2 powders were stirred in NO2BF4 solution in acetonitrile for 12 hours. When the reaction was completed, the solution was filtered and washed with acetonitrile. Chemical analyses for Li, Ni and Mn were carried out by inductively coupled plasma atomic emission spectroscopy (ICP-AES) to evaluate the delithiation amounts. Powder X-ray diffraction data were collected on a Panalytical X’pert-pro diffractometer. The morphology was observed by scanning electron microscopy (SEM, Hitachi, S-2600N). The crystal structure analysis was performed by using the synchrotron X-ray diffraction at BL19B2 (SPring-8, JAPAN). The valence states of Ni and Mn before and after magnesiation were examined by the XAFS at BL14B2 (SPring-8, JAPAN).

Discharge and charge tests were performed at 60 °C using a positive electrode, which consisted of the delithiated Li1-xNi0.5Mn0.5O2, conductive carbon, and poly-tetrafluoroethylene powder between 0.5 and 3.0 V using an Mg-alloy negative electrode at a fixed current density of 5 mA g-1. A solution of 0.5 M Mg(TFSI)2 in a acetonitrile (Kishida Chemical Co., Ltd.) was used as the electrolyte. The cells were constructed in an argon-filled globe box. 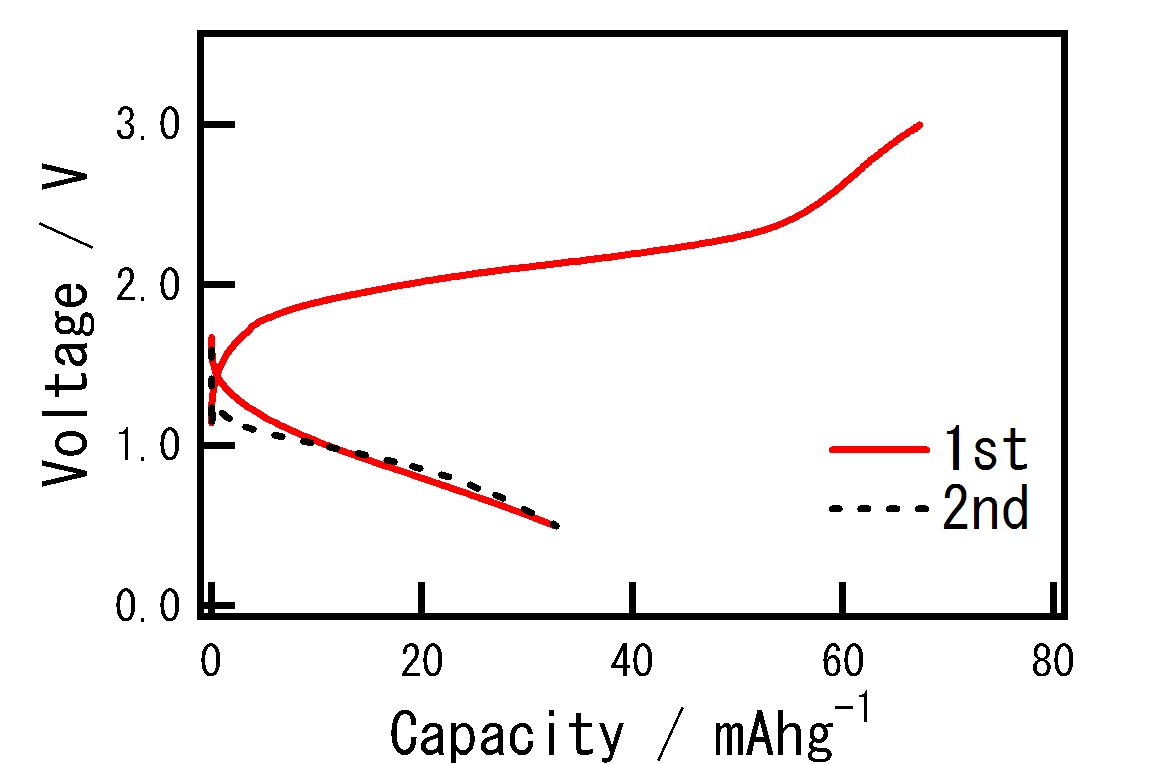