(1) Basicity control of anion-conducting groups (ACG) in AEMs. The weak base is utilized for ACG to suppress the self-degradation of the membranes and high water uptakes to be stabilized because most of the AEMs possess tetraalkylammonium hydroxides as an ACG, which is well known as one of the strongest organic bases. Furthermore, the weak base AEMs should have less water uptakes due to their own stability. From the comparison of the N-alkylated forms of 5 different diaza-compounds as an ACG, the imidazolium-based AEMs (AEM(Im)) possess the high conductivity and low water uptake compared with tetraalkylammonium-type AEMs (Scheme 2).

(2) Alkaline-durability of the imidazolium-based AEMs. The N-methylated imidazolium cation in AEMs are subjected to β-elimination and hydrolytic ring opening degradation to reduce the anionic conductivity in alkaline solution (1M KOH, 80°C). Therefore, for suppressing β-elimination, we introduced the graft-copolymers of vinylimidazolium with styrene because the adjacent vinylimiazolium cations led very fast elimination due to the double β-positioned hydrogen.2) Furthermore, for suppressing hydrolysis, the protecting group is introduced at 2-posion of imidazolium ring, which are subject to hydroxide attack (Scheme 2). The AEM(MIm/St) with a MIm/St ratio of 60/40 shows gradual decreases of conductivity in the alkaline solution. The alternative copolymer grafts of 2-methylimidazolium and α-methylstyrene in AEMs (AEM(MIm/aMS)), which has no adjacent imidazolium units, totally suppressed the alkaline degradation in the alkaline solution. This durability improvement strongly indicates that the alternative structure suppressed not only β-elimination but also the ring-opening degradation. As the results, the AEM(MIm/aMS) keeps their initial conductivity (50 mS/cm) in more than 1000 hours in 1M KOH at 80 °C.

The high conductivity and alkaline durability of the abovementioned methylimidazolium-based AEMs can be well elucidated from the hierarchical structures of the AEMs. By contrast variation small angle neutron scattering (SANS) technique, we revealed the detailed hierarchical structures of AEM(MIm/St); the original crystalline lamellar domains of a ETFE base film and interconnected hydrated domains, composed of the entire graft chains and water, offer good mechanical properties and the conductivity, respectively.3) Using the SAXS measurement, by which the internal structure of ion channels at a length scale < 2 nm can be observed, AEM(MIm/St) has the characteristic “ion-pair” distributed in the ion-channels at RH < 80%. Namely, the ion-channels are disconnected at 80% RH but well-connected in liquid water. Judging from this RH dependence, the disconnected ion-channels even under relatively high humidified conditions (80% RH) should be the substantial factor for lower power generation efficiency of AEM-type fuel cells than those of PEM systems.

We next analyzed the AEM(MIm/St) with different monomer compositions. Contrary to the above mentioned AEM(MIm/St) (MIm/St ratio of 60/40), the AEM with higher styrene ratios (MIm/St = 40/60 and 20/80) showed less durability in the alkaline solution. By a SANS contrast variation method only the AEMs with MIm/St = 40/60 and 20/80 showed new water puddle sphere with a diameter of 3-4 nm and the volume composition of spheres increases with the increases of styrene ratios. Thus, we concluded that the imidazolium groups around the water puddle are subjected to the hydrolytic attack to lead the degradation of the AEMs. Now, we are analyzing the hierarchical structures of AEM(MIm/aMS) to reveal the structural reasons for the highest alkaline durability so far.

Acknowledgement
This work was supported by the Advanced Low Carbon Technology Research and Development Program (ALCA) from the Japan Science and Technology Agency (JST). 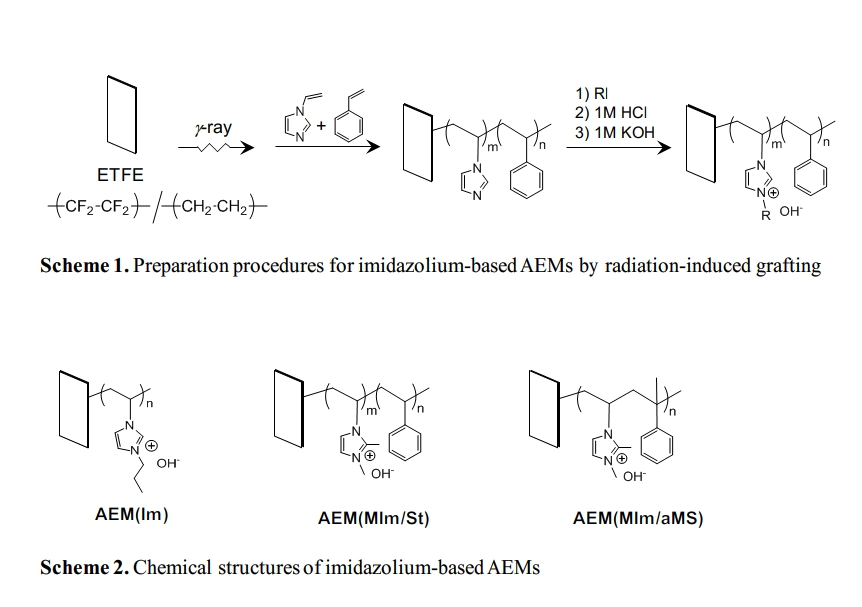