Dye-sensitized solar cell (DSSC) has been studied in the past two decades because of its high cost-efficiency characteristic. It is well known that the electrons recombination behaviors related to the trap states on the interface between anode and electrolyte are very important to decide the performance of DSSC. It has been reported that the cells with different additives have different trap states distribution on TiO2 anode.[1][2] Among the additives, 4-tert-Butylpyridine (4-tBP) is the most popular used one. It is generally considered to upshift the band edge of TiO2 anode which can increase the Voc and form blocking layer to reduce the electrons recombination. Considering the adsorption competition between dye and additives, we prepared the cells with different amount of dye adsorption and composition of additives on the TiO2 to study the relationship between the trap states distribution and the surface attachments. In this study, N719 dye and the electrolyte with same solvent (3-MPN) but different composition (4-tBP+DMPII and DMPII only) are applied for the cells. The trap states distribution was evaluated by measuring the chemical capacitance (Cμ) obtained from impedance measurement.

The TiO2 anode used for experiments was solaronix 74101 (thickness: 9μm main layer and 5μm scattering layer, area: 6mm6mm, provided by solaronix). TiO2 anode was Preheated at 500℃ for 30mins and kept at 120 ℃ to ensure no water adsorbed on TiO2 surface before dye soaking. The TiO2 anode was soaked into N719 dye solution (dissolved in acetonitrile) at the concentration from 0.1mM to 0.5mM for 4-10 hours. Two kinds of electrolyte: electrolyte tBP (0.05M I2, 0.1M LiI, 0.6M DMPII, 0.5M 4-tBP) and electrolyte no tBP (0.05M I2, 0.1M LiI, 0.6M DMPII) were applied for the cells. The excitation using AM1.5 solar simulator and monochromatic LED lights (627nm) were adopted in this study to analyze the characteristic of trap states distribution for different cells. The impedance was measured under the AM1.5 solar simulator at the intensity of 100mW/cm2 and LED light source at the range from 19.1mW/cm2 to 72.8mW/cm2. After impedance measurement, IMVS and IMPS measurement were applied to calculate the collection efficiency. The N719 dye adsorbed on TiO2surface was taken off by 0.5M KOH solution, and the UV-vis was applied to evaluate the amount of dye adsorption through N719/KOH solution.

By the comparison of cells with same electrolyte but different amount of dye adsorption, it is found that Cμ increase with the increase of dye adsorption. On the other hand, for the cells with similar amount of dye adsorption, the cells without 4-tBP showed a higher Cμcompared with those with 4-tBP. Interestingly, by the measurement of IMVS and IMPS, cells with 4-tBP have lower collection efficiencies compare with those without 4-tBP regardless of the dye adsorption as shown in the fig indicating higher recombination in case of adding 4-tBP into the electrolyte. These results will be further explained by the impedance analysis. Also, further study will be focus on clarifying the relationship between trap states distribution and additives attachment.

This work partially was supported by Center for Low Carbon Society Strategy (LCS) in the Japan science and Technology Agency (JST) and Shin-Etsu Chemical Co., Ltd. Japan. Their contribution is greatly appreciated. 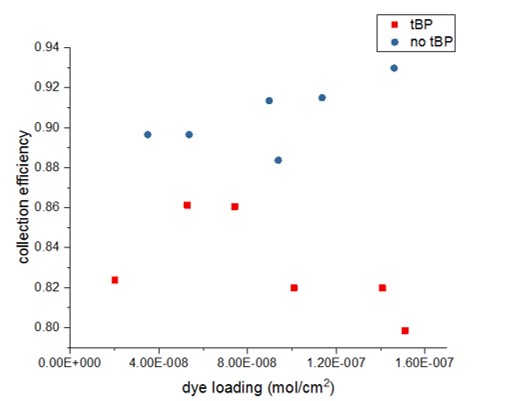