National Harbor 6 (Gaylord National Resort and Convention Center)
P. van der Linde, Á. Moreno Soto (University of Twente), P. Peñas-López, J. Rodríguez-Rodríguez (Universidad Carlos III de Madrid), D. van der Meer, D. Lohse, J. Huskens, H. Gardeniers, and D. Fernández Rivas (University of Twente)
Microstructured electrodes have been shown to be effective as light harvesting structures for solar-driven water electrolysis.[1] However, a better understanding of the fundamental physicochemical aspects of the gas evolution particularly at the micro- and mesoscale, and bubble formation during the electrolysis is needed in order to improve the efficiencies of hydrogen production.[2] We have micromachined superhydrophobic pits on top of single pillars to control the evolution of gas bubbles.

Single pillars with radius Rp, ranging from 1.5 μm up to 15 μm in radius, are considerably smaller than the electrode surface (Re >> Rp, with Re the radius of the circular electrode surface). This is done to minimize bubble-bubble interaction and to optically study the interaction of bubbles on such structures. Pits entrap air upon submersion of the electrode in an electrolyte, and thus serve as predefined bubble nucleation site. During electrolysis, the bubbles grow from the pit, up to their detachment. Upon detachment, a gas pocket is left in the pit, ensuring a continuous cycle of bubble growth and detachment.

Figure 1(b) shows the electrolytic growth of successive bubbles on a microstructured electrode at various current densities. It is observed that the size of detaching bubbles does not depend on the current density, but on a balance between interfacial tension and buoyancy forces. However, the time taken for bubbles to detach varies with the current density. In general, for successive electrolytic bubbles growing on electrodes, the bubble growth rate increases with time.

The time evolution of the bubble radius R(t) can be described by R = βtx, where β is a growth coefficient determined by the supersaturation level of dissolved gas in the liquid phase and x a scaling exponent.[3] It is known that during electrolysis with a large electrode surface (Re >> Rd, with Rd the bubble radius at detachment), diffusive bubble growth is obtained. Diffusive growth, where x = 1/2, will be assumed for our studies. The growth coefficient is then defined as: β = d(R(t)/t1/2)/dt.

Successive generated bubbles experience a locally depleted gas boundary layer. When bubbles detach, they transport hydrogen away from the boundary layer. In Figure 1(c) the β value decreases at short times (tm < 684 s, with tm the mean time of the individual bubble growth period), because the evolved hydrogen had little time to diffuse in a region of the order of the bubble size. This depletion effect is more important in early stages because, as the reaction time increases, the boundary layer develops further, resulting in faster bubble growth and larger β values. Eventually, a roughly constant value is reached with prolonged electrolysis time (not shown in the figure).

Next to the bubble evolution by electrolysis as described above, we also work on CO2 bubble evolution in supersaturated liquids on the same type of microstructured electrodes. Our ultimate aim is to understand the underlying fundamentals of bubble growth on any substrate. The obtained insight will be valuable for the design of novel surfaces in electrolysers, fuel cells, and solar-to-fuel devices.

Acknowledgements
This work was supported by the Netherlands Center for Multiscale Catalytic Energy Conversion (MCEC), an NWO Gravitation programme funded by the Ministry of Education, Culture and Science of the government of the Netherlands. 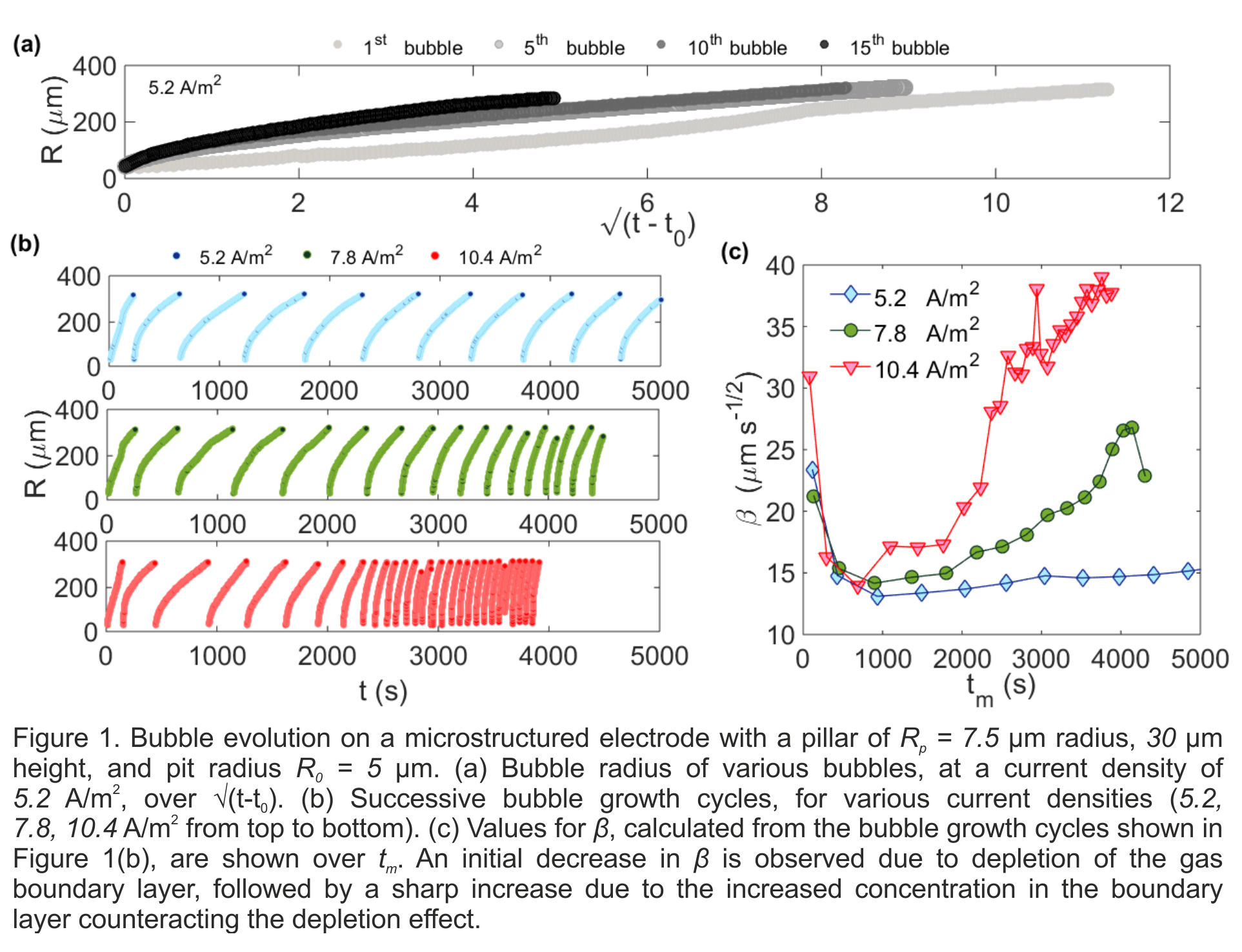