Prince George's Exhibit Hall D/E (Gaylord National Resort and Convention Center)
S. S. Oishi, A. B. Couto (Instituto Nacional de Pesquisas Espaciais), E. C. Botelho (Sao Paulo State University - UNESP/Guaratingueta), and N. G. Ferreira (Instituto Nacional de Pesquisas Espaciais)
Nitrate is a serious contaminant of ground and surface water, which cause high concern in the field of health and environmental protection. Many processes have been used for nitrate removal and the electrochemical treatment is one of the most efficient due to its advantages regarding low cost effectiveness and ability to treat highly concentrated nitrate effluents. The cathode material is an important variable for the nitrate electroreduction process and the development of new electrodes to improve their catalytic activity is a challenge. Modification of electrodes by electrodeposition of metals has been frequently used for electrocatalysis of various reactions in solution and carbon materials are often used as supports for electrocatalysts. In this work, the reticulated vitreous carbon (RVC) was used as support for silver eletrodeposition and the effect of different parameters (applied potential, AgNO3 concentration and deposition time) on the morphology and electrocatalytic activity for nitrate reduction was studied. RVC was processed using poly(furfuryl alcohol) (PFA) resin synthesized according to the best condition established previously. Polyurethane foams with 70 ppi (pores per inch) were used as matrix for the PFA anchorage and after curing, they were heat treated at 1000 °C. All electrochemical experiments were performed in a conventional three electrode cell, using the RVC with electrodeposited Ag as working electrode, a Pt screen and Ag/AgCl as the counter and reference electrodes, respectively. The deposition potentials were chosen through cyclic voltammetry at 0.1, -0.3 and -0.7 V vs Ag/AgCl that can be related to the following regions, respectively: onset of Ag deposition, massive deposition and diffusion controlled deposition. The AgNO3 concentrations solutions used were 5, 10 and 20 mmol L-1, and the deposition times applied were 10, 60 and 180 s. The morphologies obtained by field emission scanning electron microscopy (FESEM) showed that Ag deposition is not uniform due to the RVC three-dimensional structure. Ag dendrites were formed on the highest RVC stems as shown in Figure 1. Ag aggregates of different sizes and shapes dispersed on the entire electrode surface could be observed depending on the experimental condition employed and sample depth. Difference in electrocatalytic activity of the Ag/RVC electrodes for nitrate reduction was confirmed by cyclic voltammetry in 0.1 mol L-1 K2SO4 solution containing 0.01 mol L-1 KNO3 and varied with the Ag amount on electrode surface in addition to its morphology.

Figure 1 - FESEM micrograph of Ag electrodeposited on RVC at -0.3 V (vs Ag/AgCl), with a duration time of 60 s and AgNO3 concentration solution of 10 mmol L-1. 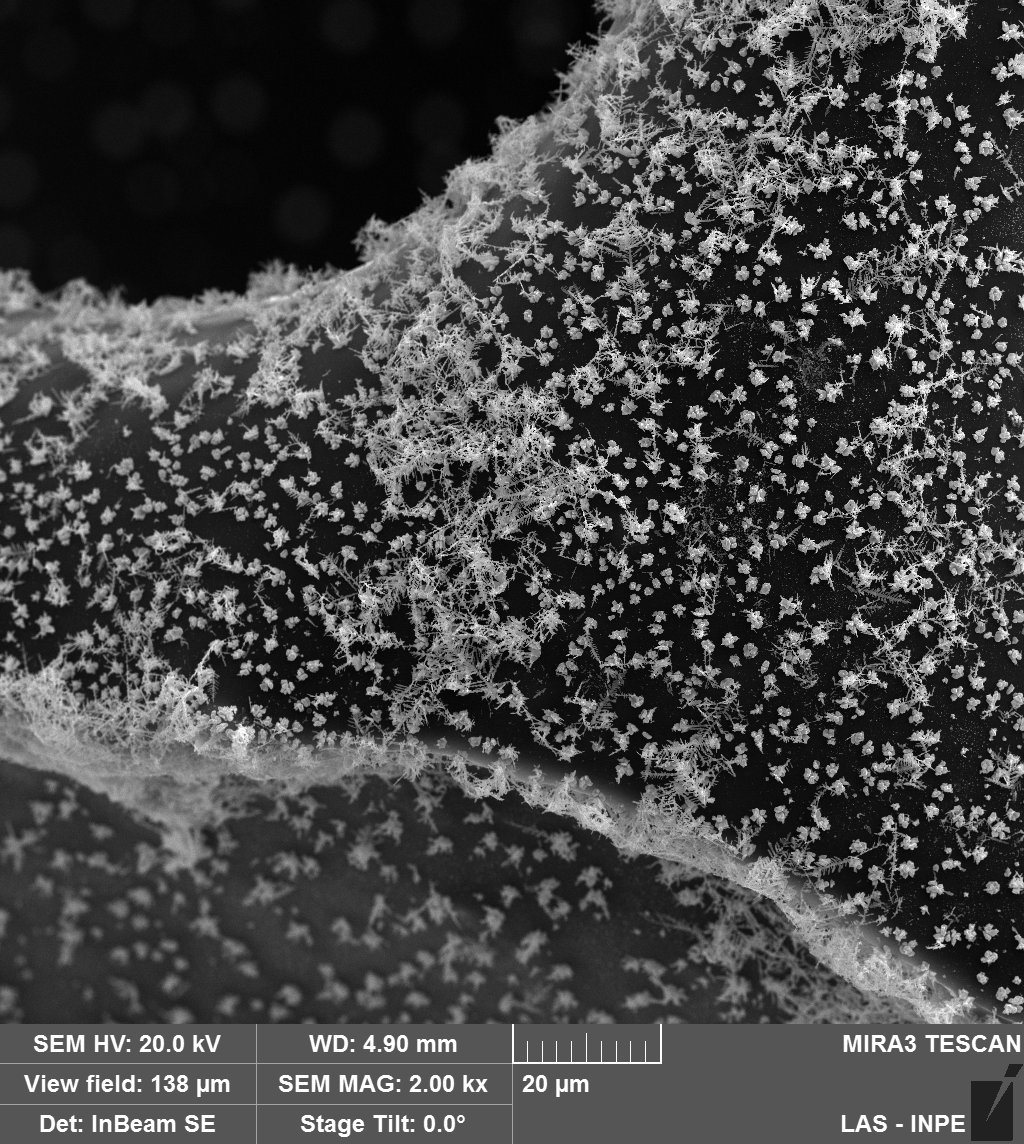