Electrocatalyst layer of polymer electrolyte fuel cells (PEFCs) has complex 3-dimensional structure, so that control and optimization of microstructure is necessary for higher I-V performance. Carbon black supported cathode electrocatalyst is widely used, whilst carbon support can be degraded through electrochemical oxidation on the cathode side. Here, in this study, SnO2 support which is conductive and stable under the strongly-acidic cathode condition has been considered as alternative support materials [1-5]. The objective of this study is to develop MEAs with higher performance and durability using the SnO2supports on various alternative conductive fillers especially carbon nanotubes (CNTs) for optimizing microstructural design of PEFC electrocatalyst layers.

46.4wt. % Pt/KB (TEC10E50E, TKK) was used as the anode electrocatalyst, while Pt/Sn(Nb)O2/CNT was used as the cathode electrocatalyst. Sn0.98Nb0.02O2was prepared via the homogeneous precipitation method. Pt nano-particles were decorated on such metal oxide support by using platinum acetylacetonate complex as a precursor [6]. The performance of the electrocatalysts prepared was evaluated by measuring mass activity with the half-cell test. Microstructure of MEAs was modified by varying Nafion-to-electrocatalyst ratio (hereafter, Nafion ratio) systematically. The performance of MEAs was evaluated by measuring I-V characteristics and separating each overvoltage.

I-V characteristics with different Nafion ratios are shown in Fig. 2. MEA with Pt/Sn(Nb)O2/CNT and 13wt. % Nafion exhibited the highest I-V performance in this study. I-V performance depended on the Nafion ratio. This is because open pores as gas transport pathway were filled with excess Nafion ionomer when Nafion ratio increased too much. On the other hand, less Pt particles were covered with Nafion ionomer with decreasing Nafion ratio. In this study, cell voltage of the MEA with the Pt/Sn(Nb)O2/CNT electrocatalyst achieved 94% (0.68V) of that of the MEA with the standard 46.4wt. % Pt/KB (0.72V) electrocatalyst at 0.2 A/cm2. Comparable I-V performance of MEAs with the Nb-doped SnO2support on the conductive fillers is successfully verified. 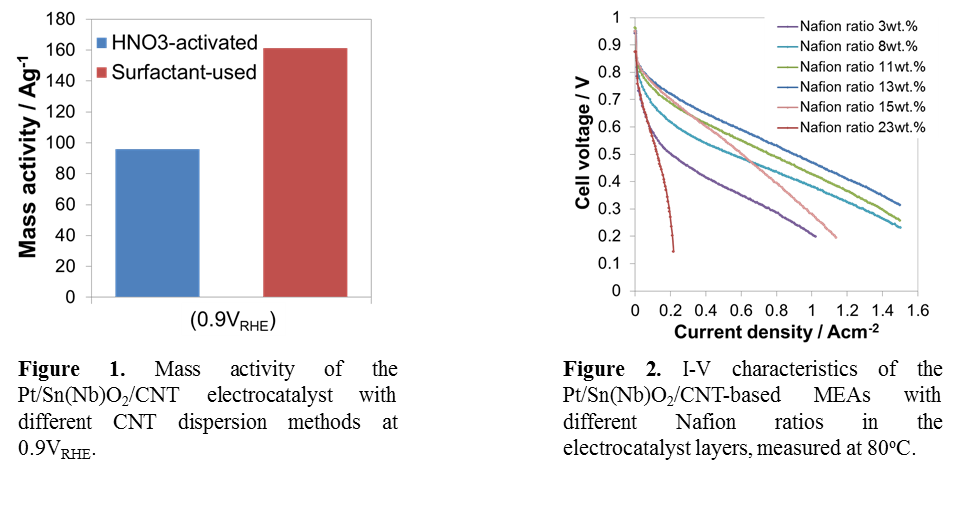