1543
Photochemical Preparation of Pt Electrocatalysts on SnO2 Support for PEFCs

In polymer electrolyte fuel cells (PEFCs), Pt nano-particles dispersed on carbon black (Pt/C) are generally used as electrocatalysts. Reducing the amount of expensive Pt is the important issue for the implementation of low-cost PEFCs. Since the oxygen reduction reaction (ORR) occurs only on the surface of the Pt nano-particles, core-shell catalysts in which Pt monolayer shell is loaded on metallic nano-particles core are effective in reducing the Pt usage. Although such core-shell catalysts with Au or Pd cores exhibit very high activity compared with the commercial Pt/C, their durability still remains as a challenge (1). The cost reduction effect is also limited if we use expensive metal cores. According to previous studies, the durability of the PEFC electrocatalyst can be improved by using SnO2 as a electrocatalyst support which has thermochemical stability under the PEFCs cathode conditions (2-4). Therefore, it is, in principle, possible to develop electrocatalyst with both higher durability and ORR activity by employing such stable oxide as the core instead of noble metal. Here, the objective of this study is to deposit Pt on SnO2 at an atomic level by applying a photochemical procedure.

Vapor grown carbon fiber (VGCF-H) was applied as the conductive backbone of the electrocatalysts. SnO­­2 was prepared on the VGCF-H (SnO2/VGCF-H) by the ammonia co-precipitation method. As a procedure to deposit Pt on the SnO2 nano-particles at an atomic level, photochemical procedure was applied to reduce Pt ions by irradiating ultraviolet (and visible) light having energy exceeding the band gap energy of oxide semiconductors. Since this photochemical reaction occurs only on semiconductors, the selective Pt deposition on SnO2 is possible. In addition, we selected methanol and formic acid as sacrificial reagents to capture electron holes for the photochemical reactions.

Nanostructure of the obtained electrocatalysts was observed by STEM. We also made ICP analysis to quantify Pt loading. Electrochemical characterization of these electrocatalysts was carried out by the half-cell measurements. Electrochemical surface area (ESCA) was measured by cyclic voltammetry (CV), and oxidation reduction reaction (ORR) activity was derived from kinetically controlled current density (ik) after the rotating disk electrode (RDE) measurement.

STEM image of Pt/SnO2/VGCF-H prepared by irradiating ultraviolet (UV) light for 30 minutes in methanol is shown in Figure 1. This micrograph shows Pt particles deposited with a diameter of about 1nm on SnO2 surface. Although the Pt loading increased with UV irradiation time, the Pt particle diameter increased and ECSA tended to decrease. When formic acid was used, the photochemical reaction was promoted, and more Pt was deposited with the same UV irradiation time, compared with methanol. We have succeeded to homogeneously coat Pt on the oxide support and to improve both ECSA and mass activity by shortening the UV irradiation time. 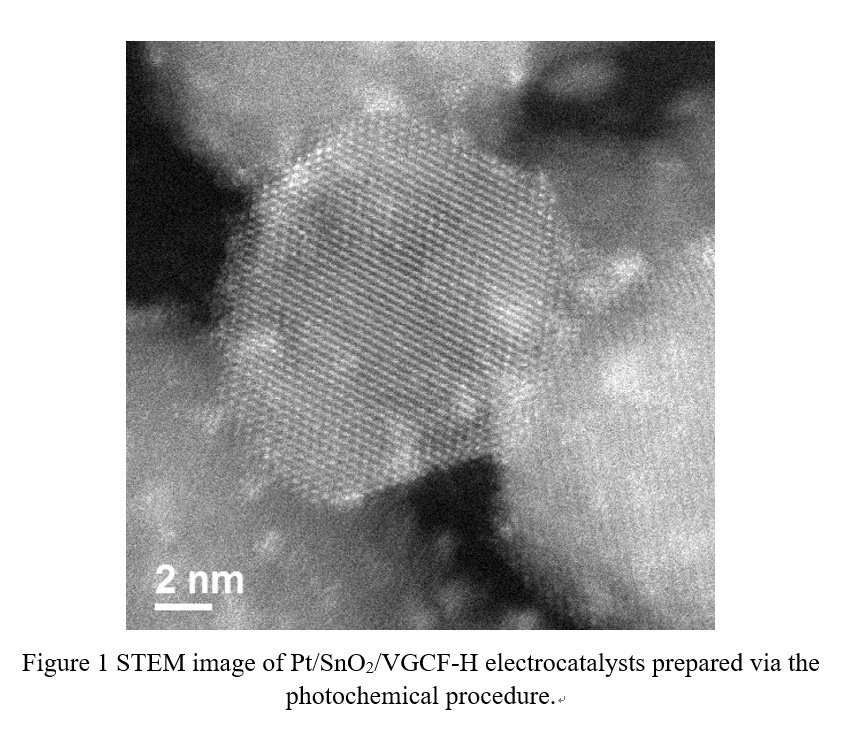