Chesapeake L (Gaylord National Resort and Convention Center)
R. Penhallurick, D. Chen, and Y. J. Tong (Department of Chemistry, Georgetown University)
Proton-coupled electron transfer (PCET) reactions, such as those used in the electron transport chain in mitochondria for adenosine triphosphate production, photosynthesis or nucleic acid repair, are often important to proper cellular functioning and survival. Despite this, many of the mechanisms and energetics that govern PCET in proteins are not fully understood and call for further examination. One of the limitations to understanding enzymatic PCET reactions includes the limited availability of sensitive bioelectroanalytical techniques for studying this class of biological redox chemistry. In this presentation, we report a new, highly sensitive approach to probe PCET in biochemical systems through the use of a scanning electrochemical microscope (SECM) based chronoamperometric method.

The proof-of-concept and feasibility measurements were carried out on surface-immobilized cytochrome c oxidase (CcO) and coenzyme Q10 / cytochrome c reductase (bc1). The proteins were embedded into unilamellar liposomes and then immobilized onto the surface of a gold-coated silicon wafer electrode through integration of the membrane with various gold-bonded tethers or supported lipid membranes, such as long-chain alkanethiol or thiolated-PEG-cholesterol, while in HEPES-Na buffer (at various pH). Upon contact with the surface of the lipid membrane, the platinum ultramicroelectrode SECM tip (~600 nm) was held at a potential (–0.8 V vs. Ag/AgCl) so that diffusion-controlled hydrogen evolution can take place. This reaction current is proportional to the near-tip proton concentration. Upon application of a potential via the gold-coated silicon wafer, or injection of the protein’s native electron donor, such as reduced cytochrome c, a change in the localized proton concentration was measured (shown in Figure 1). The density of immobilized protein on the surface of the electrode was analyzed by AFM in order to normalize current responses. The technique proved to be successful in detecting sub-picoampere current changes in response to proton-pumping of the transmembrane proteins towards the platinum ultramicroelectrode, which could be used for further investigations in the kinetics of other proton-coupled electron transfer proteins. 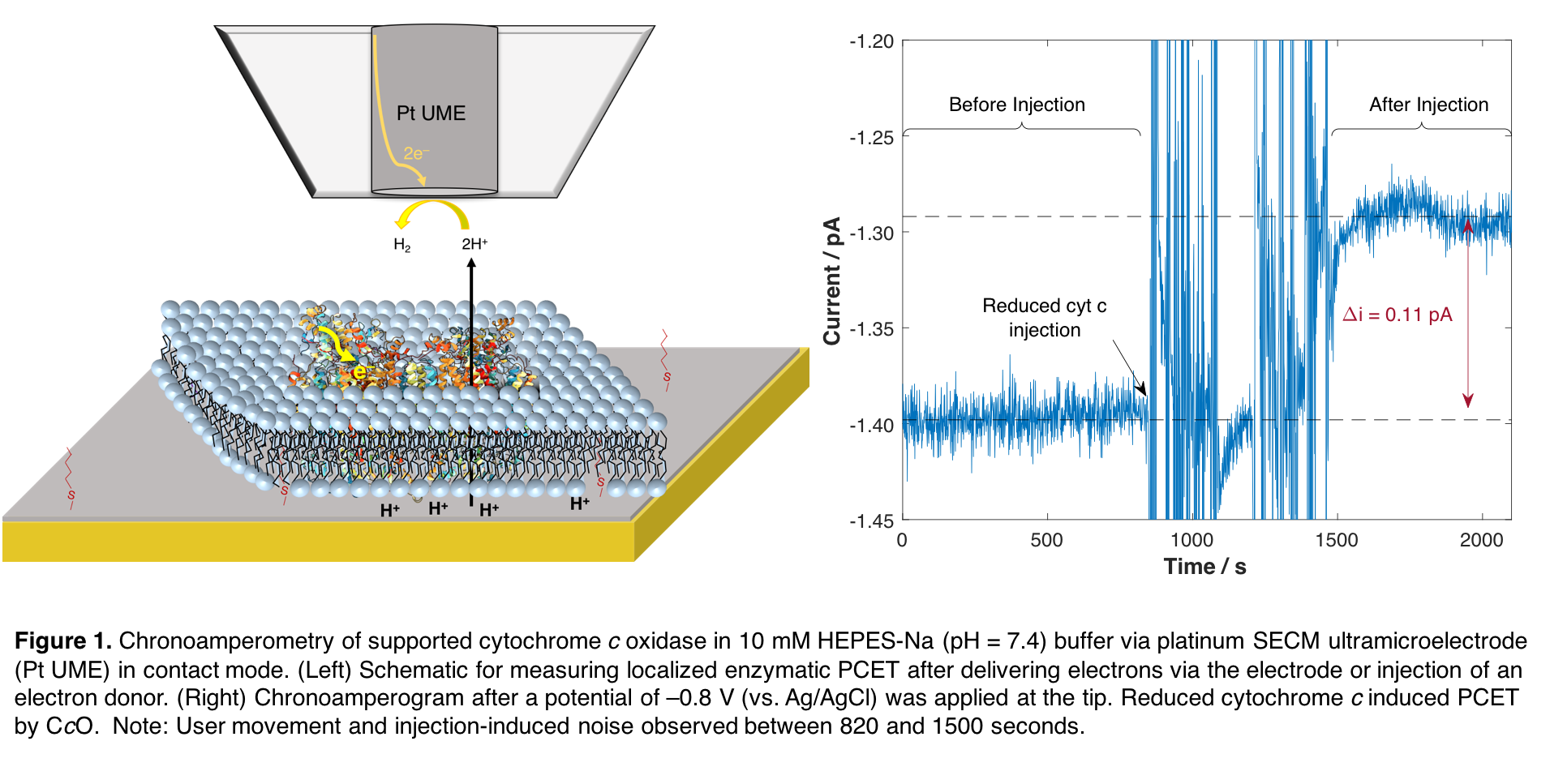